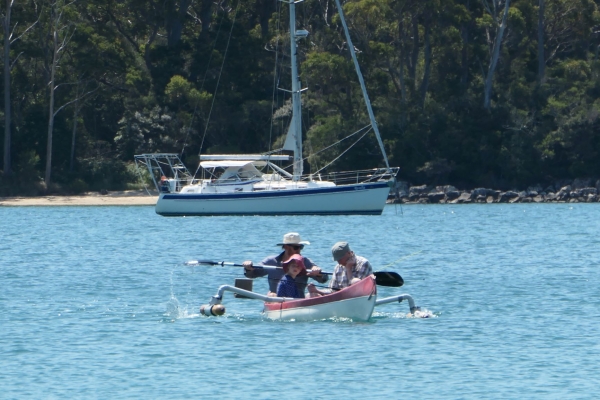 We had been planning a 2 week trip to Port Davey and Bathurst Harbour with our friend Lindsay, but an expired alternator meant a change in plans.  The weather in early January was too good to waste, so we decided that a jaunt closer to home would be enjoyable and more prudent with only a single small working alternator.

We motor-sailed down to Mickey’s Bay, near the south end of Bruny Island.  I love this bay for its clear water and peaceful setting.  Lindsay and I managed to get 3 legal sized flathead -not quite enough for dinner so we put them in the fridge. As we left the next day we snuck inshore of the big fish farm and just managed to avoid a tug towing a fish pen! 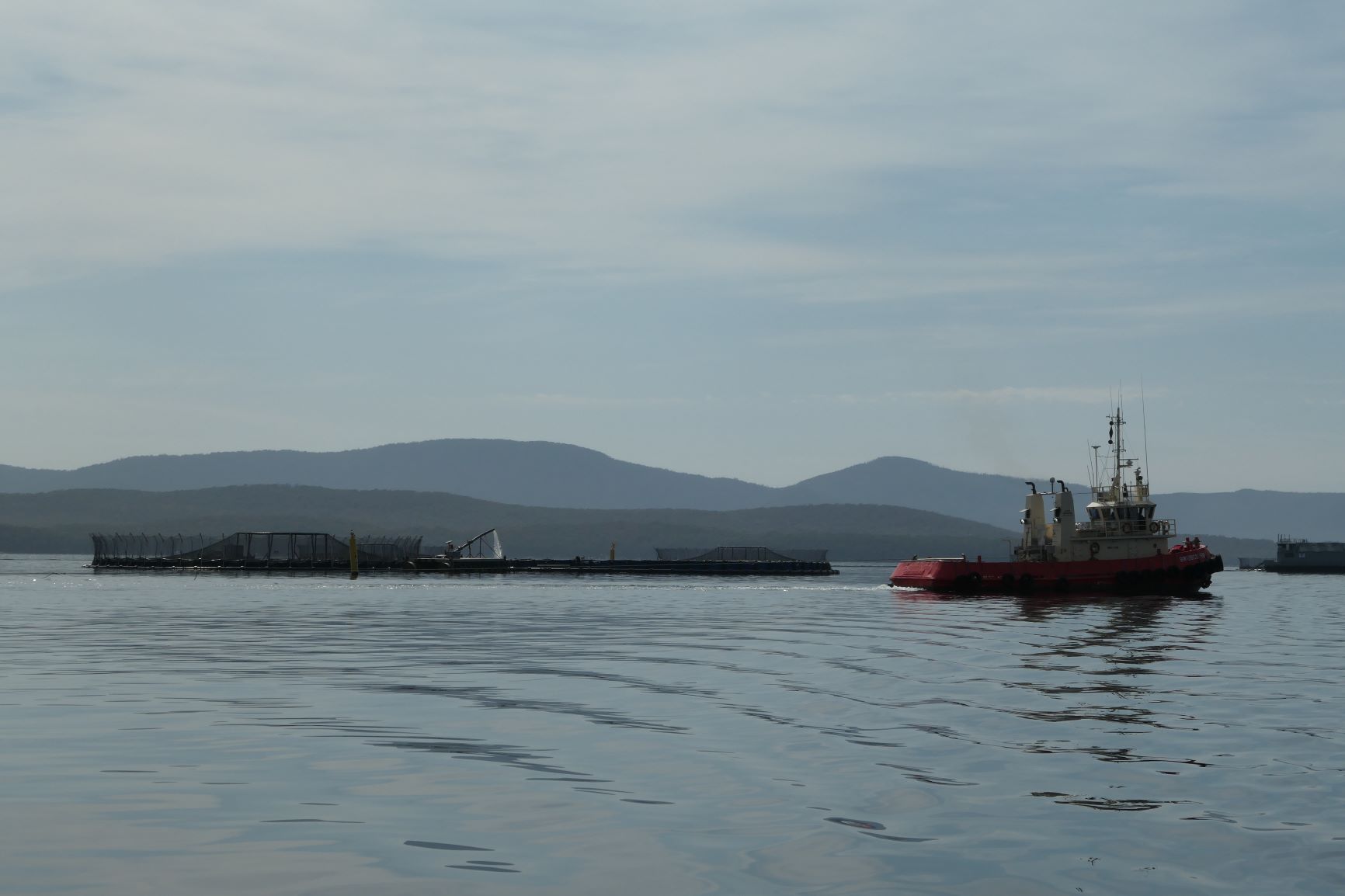 We sailed SW toward Recherche Bay we passed through areas of red tide algae (warm water!) and then into a sea fog.  It cleared as we approached Recherche and we anchored off Cockle Creek.  The sun was out and there were lots of families enjoying the beach and the water. 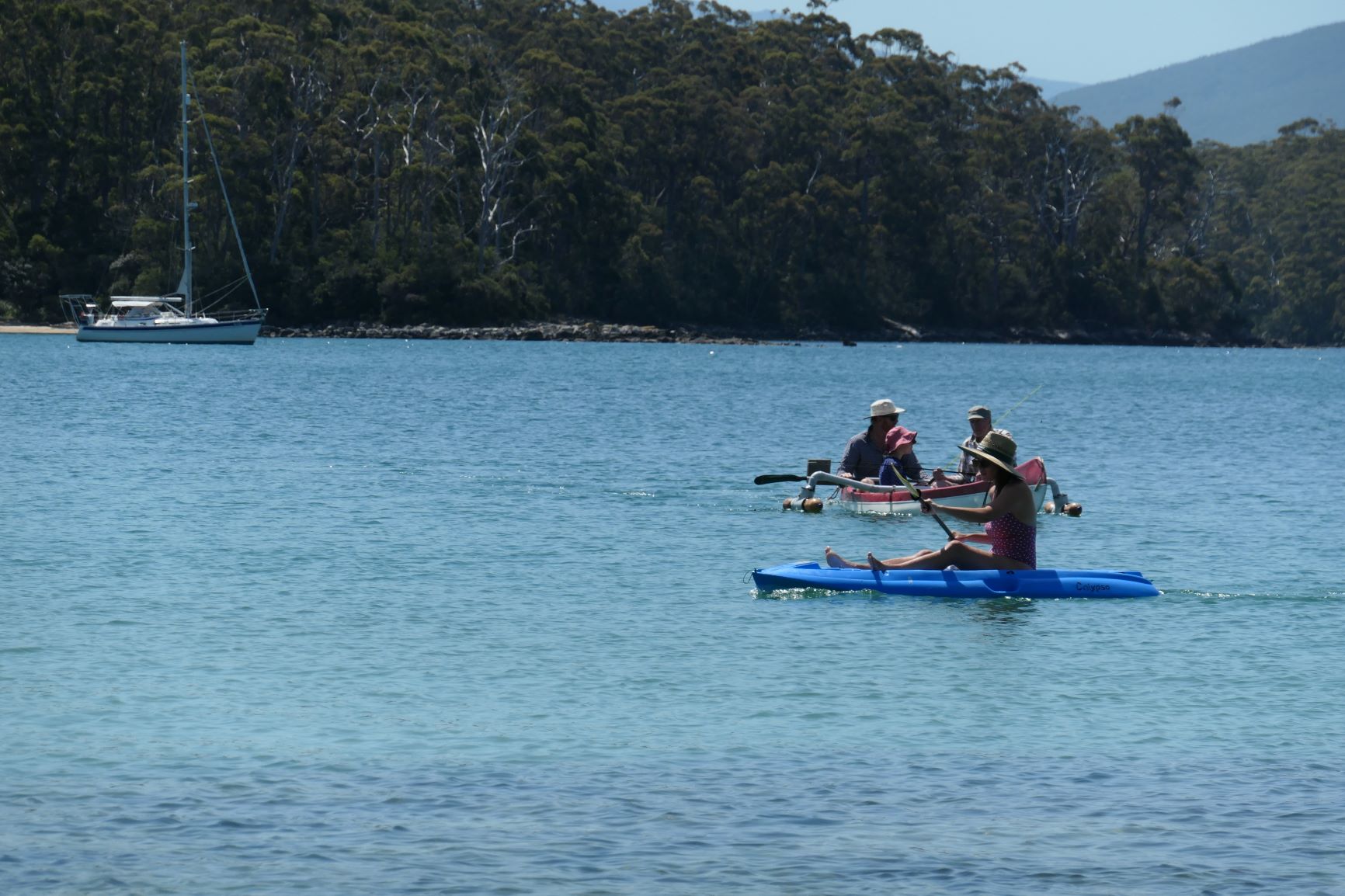 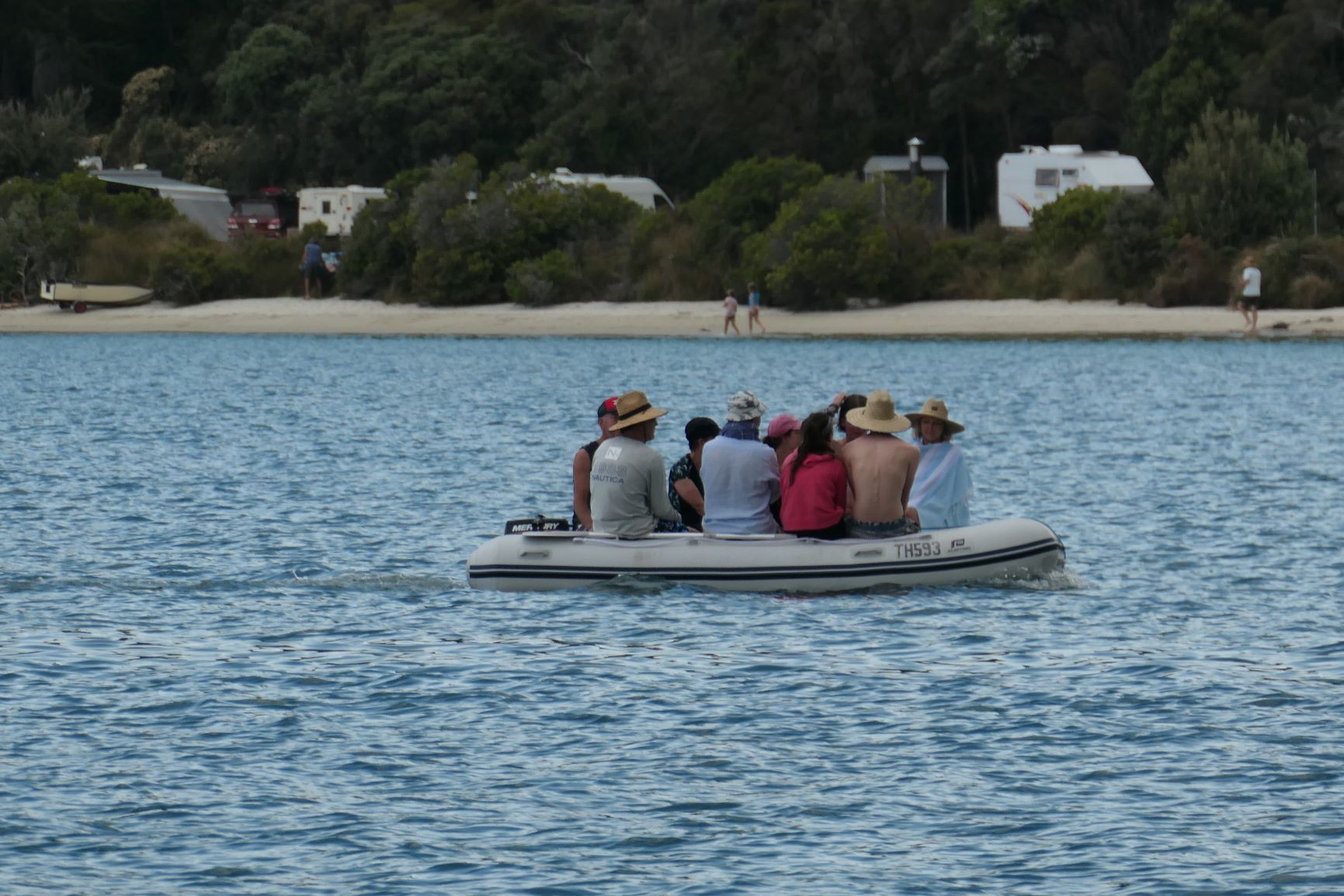 After a walk on the beach we had another go at fishing and got 2 more flatties – yeah, dinner!  That evening there was dry lightning and we heard on the news that a number of bushfires had been started.  The next morning we saw smoke from the fires in the SW.

After exploring site of the French garden (just lines of rocks in a patch of forest) we caught up with Mark on Crown Venture, who had been out with friends, fishing and diving for crays and abalone.  We joined them for sundowners, complete with stunning homemade cheeses and charcuterie made by Bruce, the diver, and then we were treated to a couple of cleaned and sliced abalone, which Alex flash fried in butter and garlic – yum!. 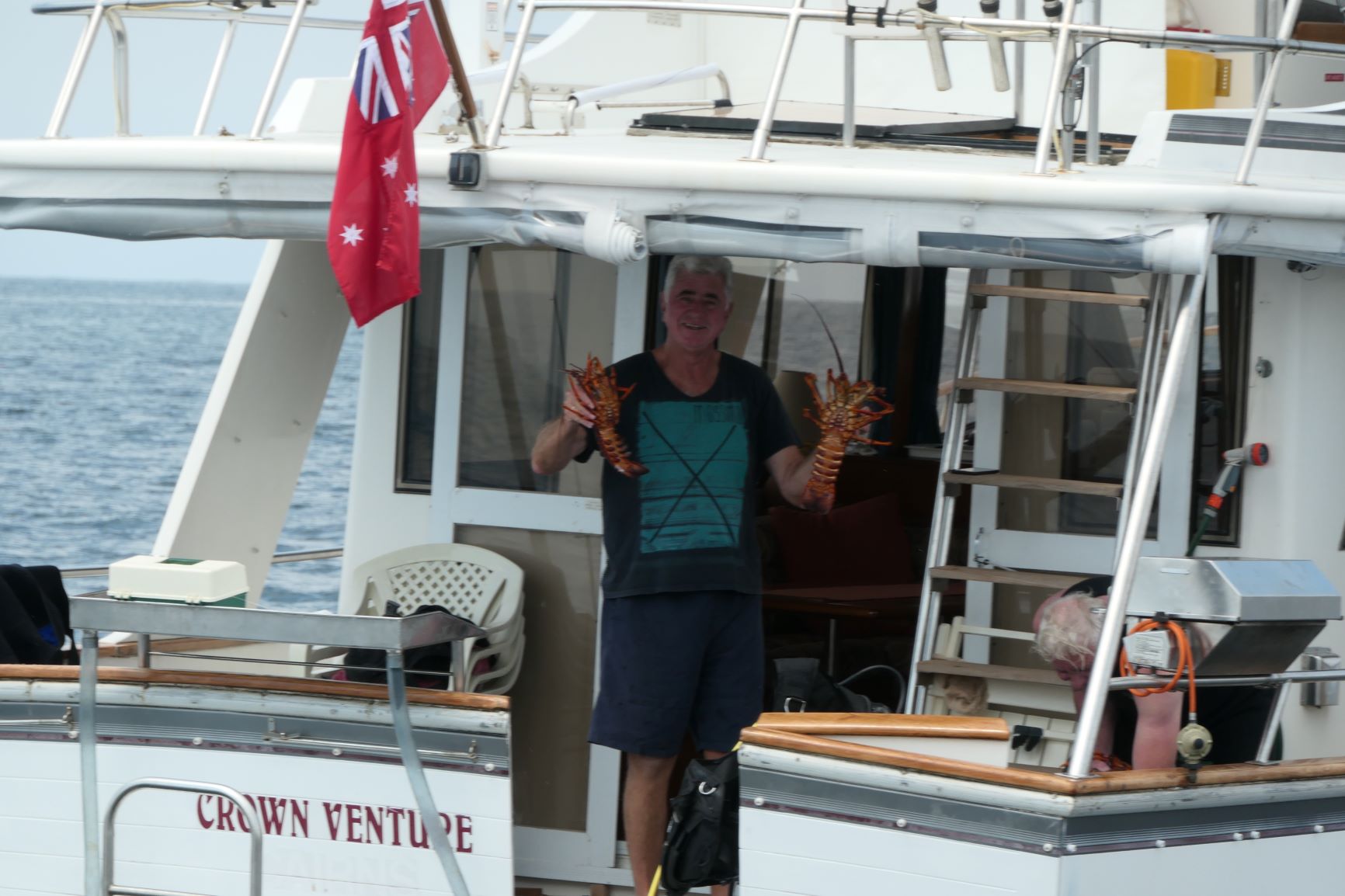 The following day we sailed the short distance north to Deep Hole in Southport. One of our goals for the trip was to take the dinghy up the Lune River to visit Graeme and Louise at their house in Hastings.  It took about 40 min, navigating around shallows and through a strong-ish current to get there, but it was fun. 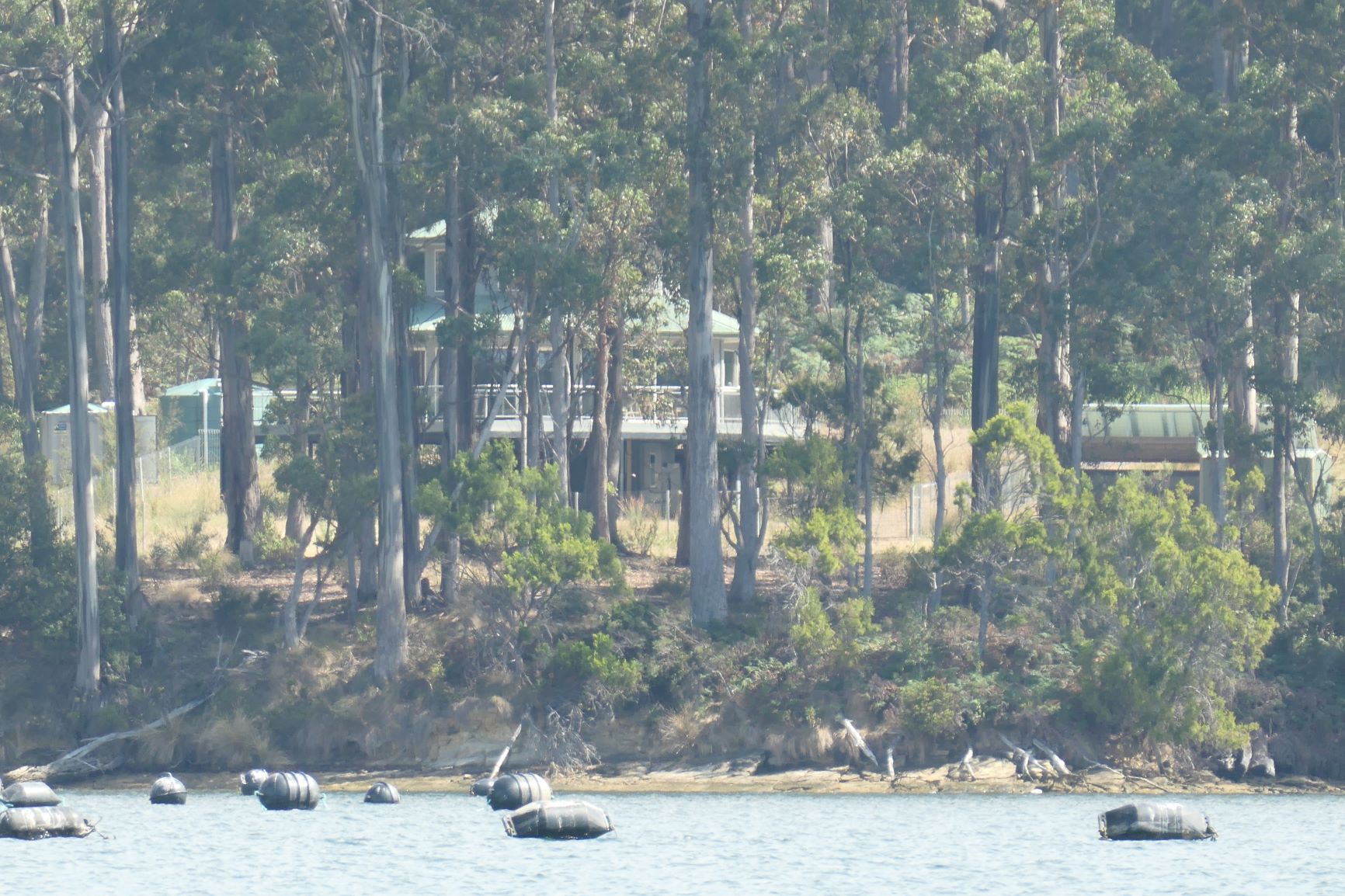 After a pleasant lunch we had an easy ride back to the boat and decided to raise the anchor and head up to Dover for Friday night drinks at the local yacht club.

We picked up a KBC mooring and went ashore just as the club opened.  It was a lively evening, with plenty of people to talk to and I even was able to buy some farm fresh eggs. The next day we started our return trip back up the channel.  We had a great broad reach across to Gordon, but then it got a bit blowy and we ended up with an hour of bashing into it before settling onto a mooring in Quarantine bay.  It was a smoky evening  The next morning it was time to return to Kettering to drop Lindsay off and to pick up a package from home and our new electric outboard motor. 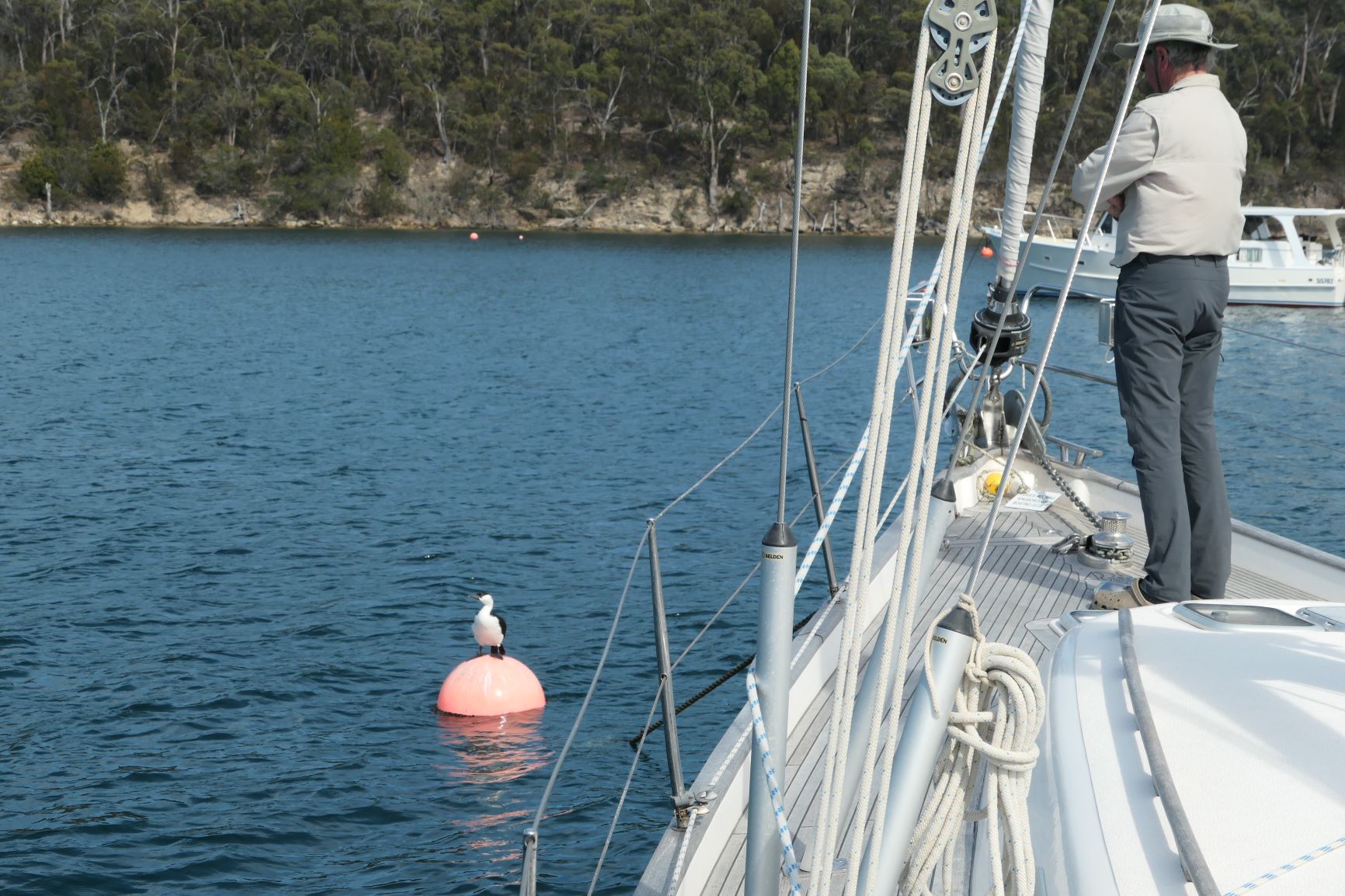 The package was the final piece to replace our dead alternator, so of course we had to go out again to test out the new alternator and outboard!  A simple cross-channel trip of 20min took us to Apollo Bay where we picked up yet another KBC mooring.  We enjoyed sundowner drinks with Julie and Ian off Westerly, while white ash from the distant fires snowed down around us.  After dark a beautiful full moon rose while phosphorescence sparkled in the water like stars. 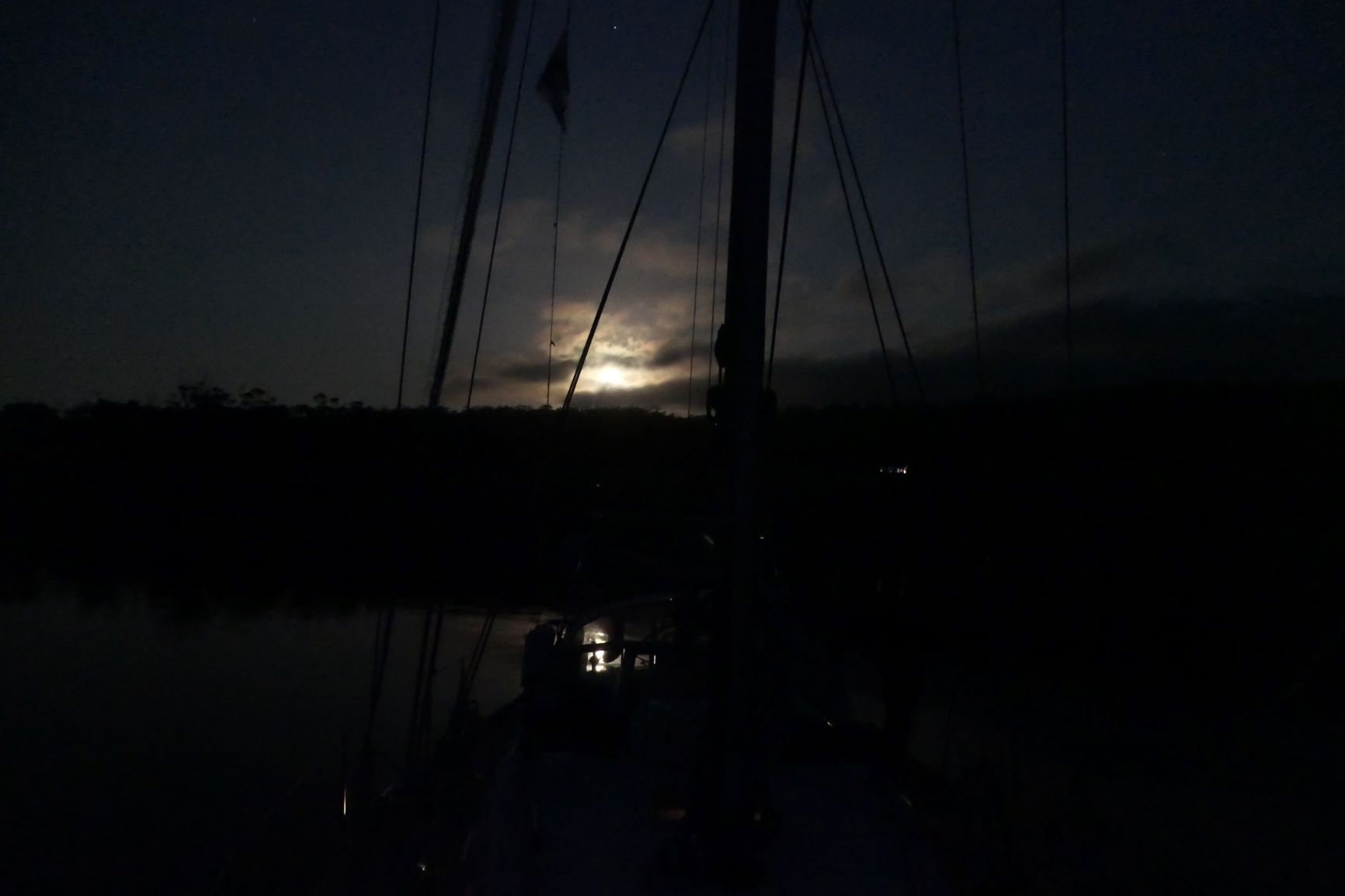 The smoke increased to an unpleasant stench overnight and we awoke to a thick smog of smoke haze.  It gave us both headaches and was clearly unhealthy, so after a quick run around the bay in the dinghy to play with the new outboard we headed straight back to Kettering and home to our air-conditioned house! 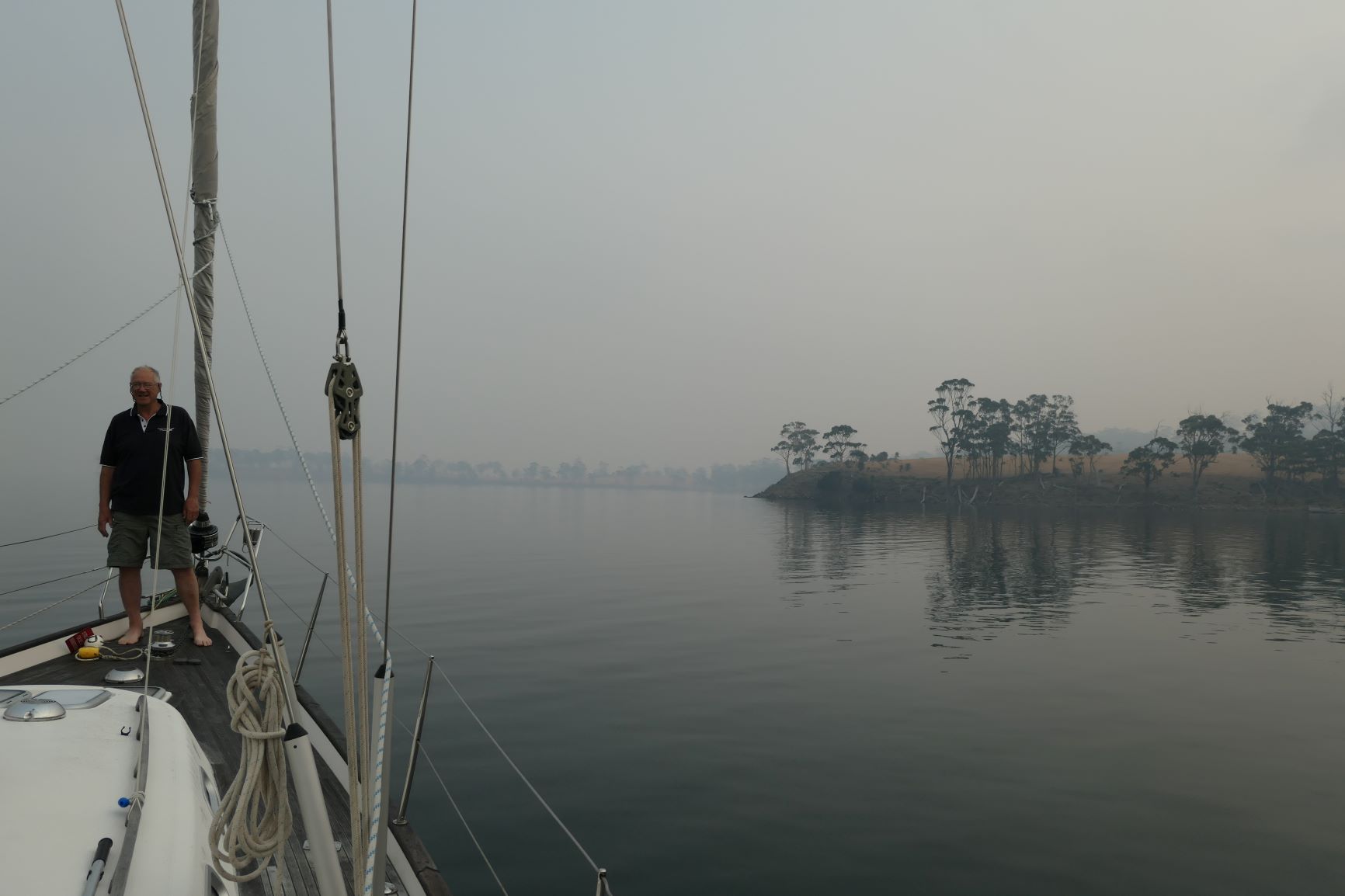