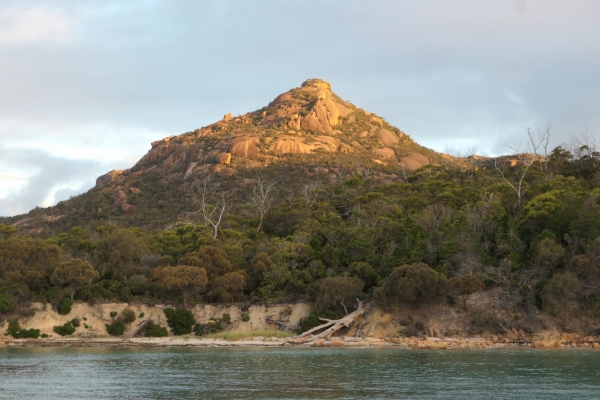 We had a lovely sail up to Schouten Island and anchored in Crockett’s Bay, next to Argos of Sydney.

They’d been diving and invited us to share their abalone for dinner – yum!  There is a pod of 4-5 dolphins that comes into the bay several times a day and swims around the boats.  Dolphins are always a treat! 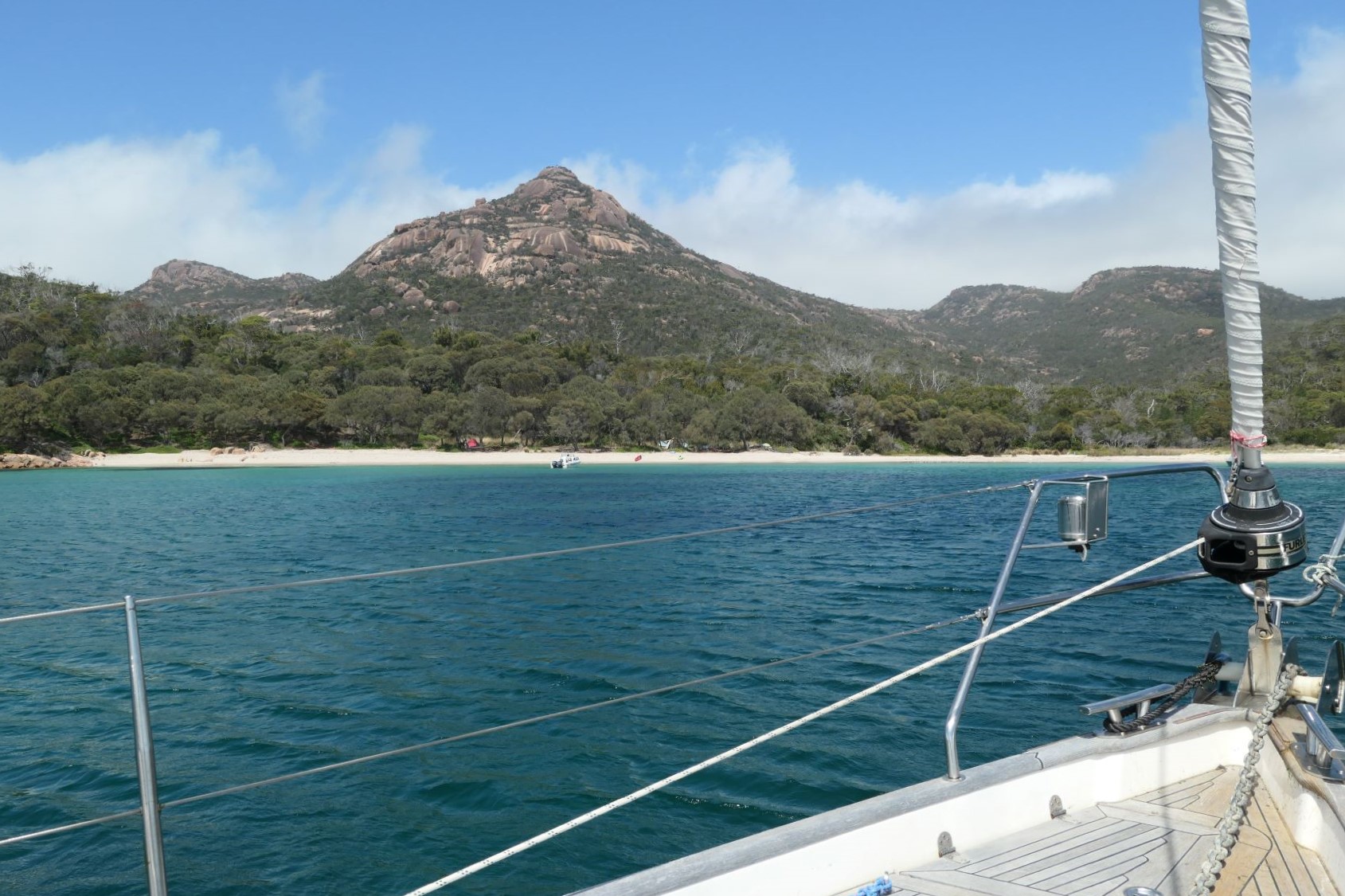 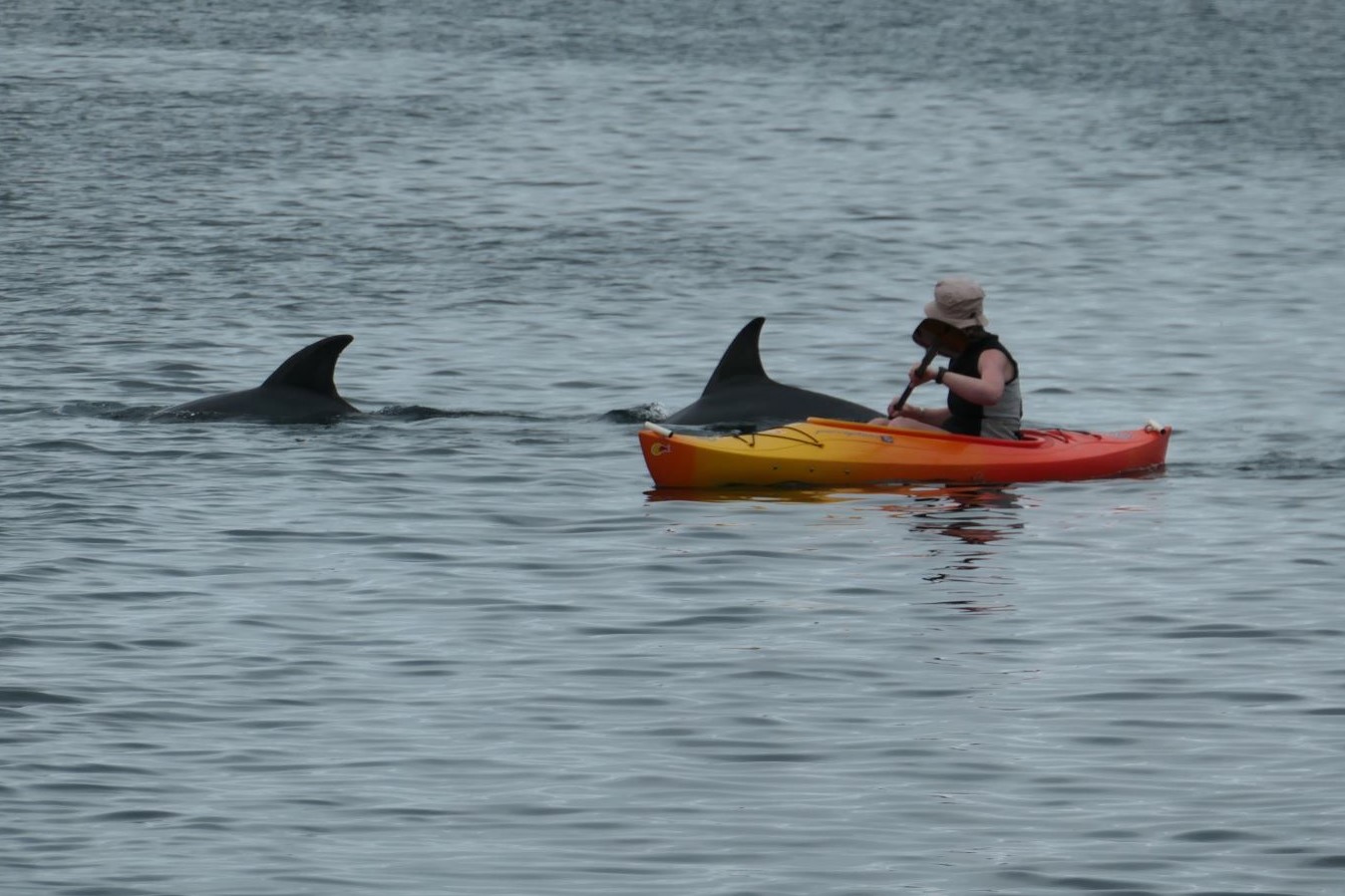 We enjoyed a couple of nights there before moving north to Wineglass Bay.  Not our favourite anchorage due to swell, but we managed to get a spot amongst a few other boats in the slightly more protected SW corner.  When the wind picked up late in the afternoon we thought that we might be dragging a little toward the boat behind us and so we reanchored, using a new-to-us technique of dropping two anchors in tandem.  That seemed to hold us rock steady and we enjoyed a dinner of freshly caught flathead. 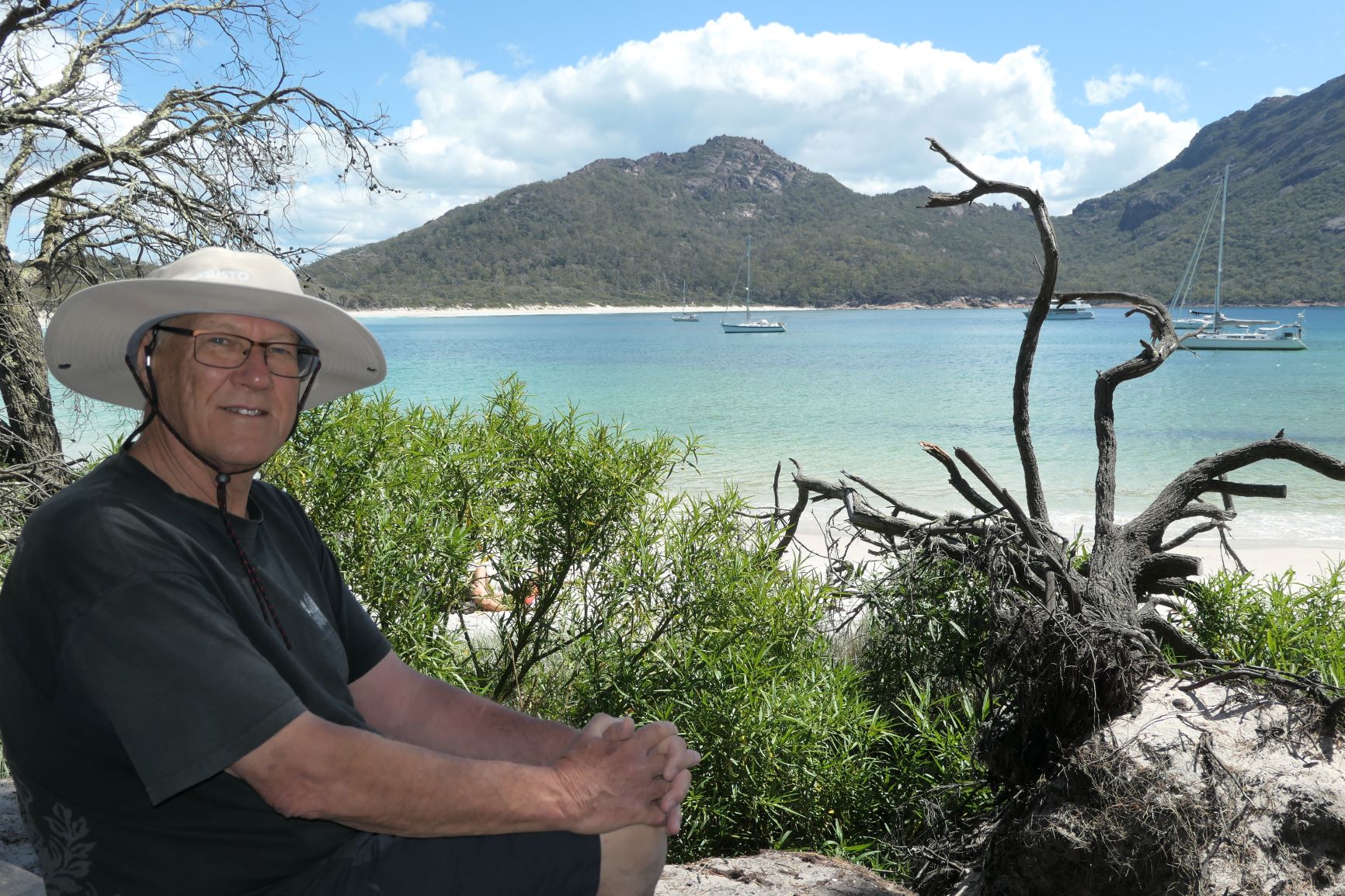 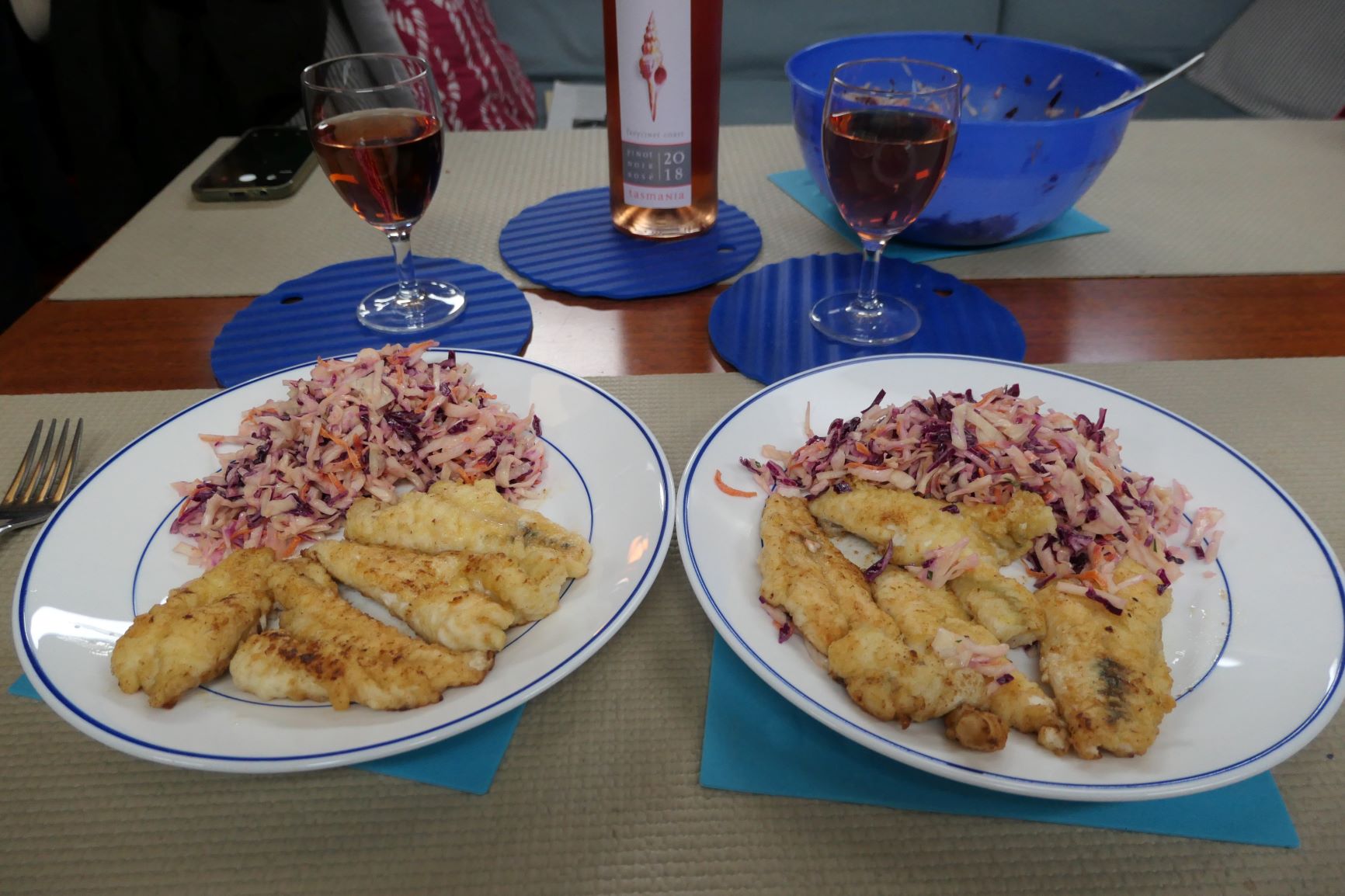 The next day, after catching 2 squid on request from the skipper, we went ashore for a quick walk.  On our return to the boat we briefly fouled the outboard propeller – it was enough to break the shear pin.  Ok, so this is what shear pins are supposed to do to save the prop from breaking.  Should be an easy replacement, right?  Not on a Torqeedo electric outboard!!  It took a huge amount of effort to get the prop off and the broken bits of pin out.  The pin also broke a bit of the plastic (!!!) support on the prop, so it looks like we’ll need a new propeller eventually. After several hours and a huge mess created below trying to find tools, we managed to change the pin.  Not impressed with this piece of expensive German engineering! 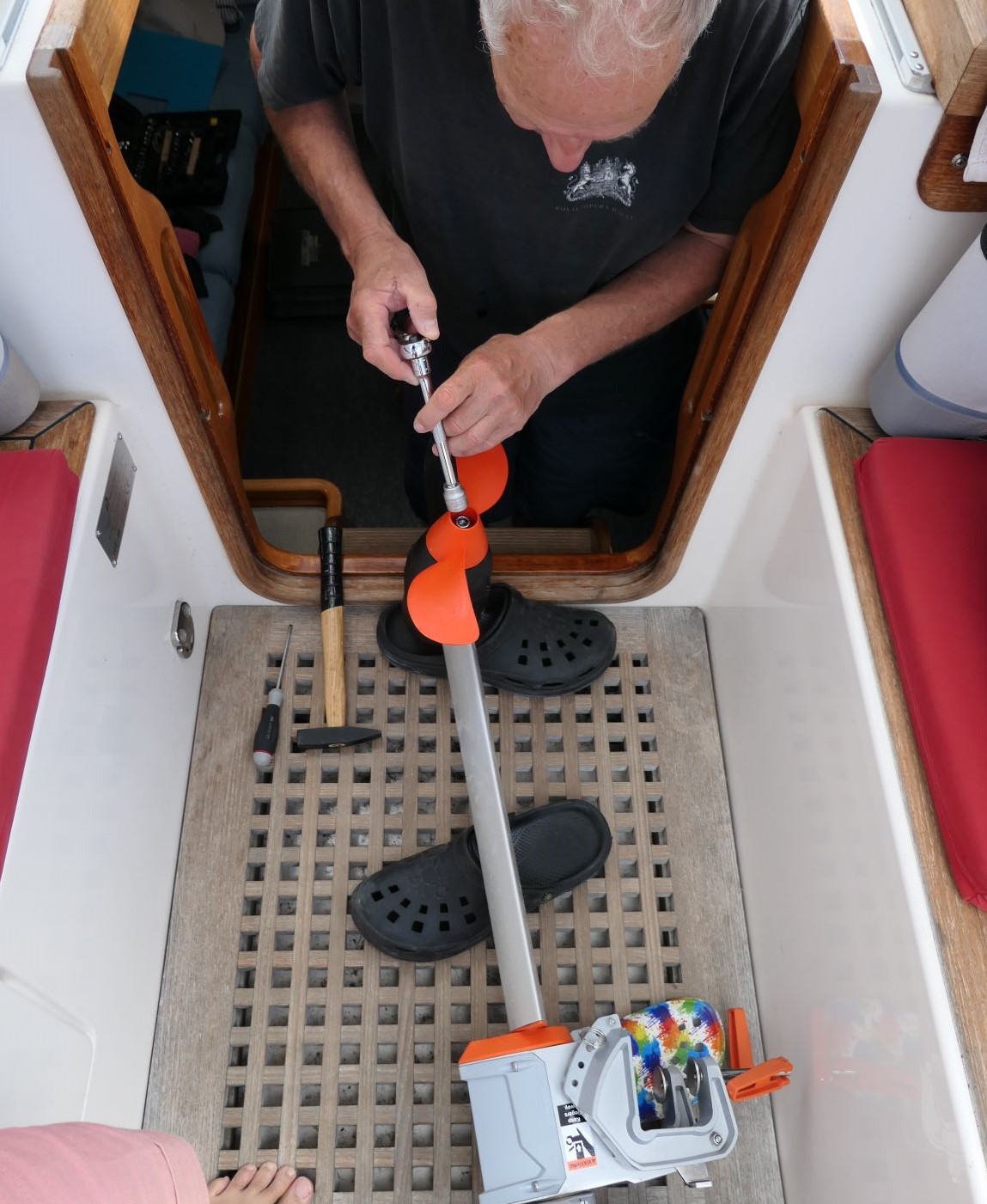 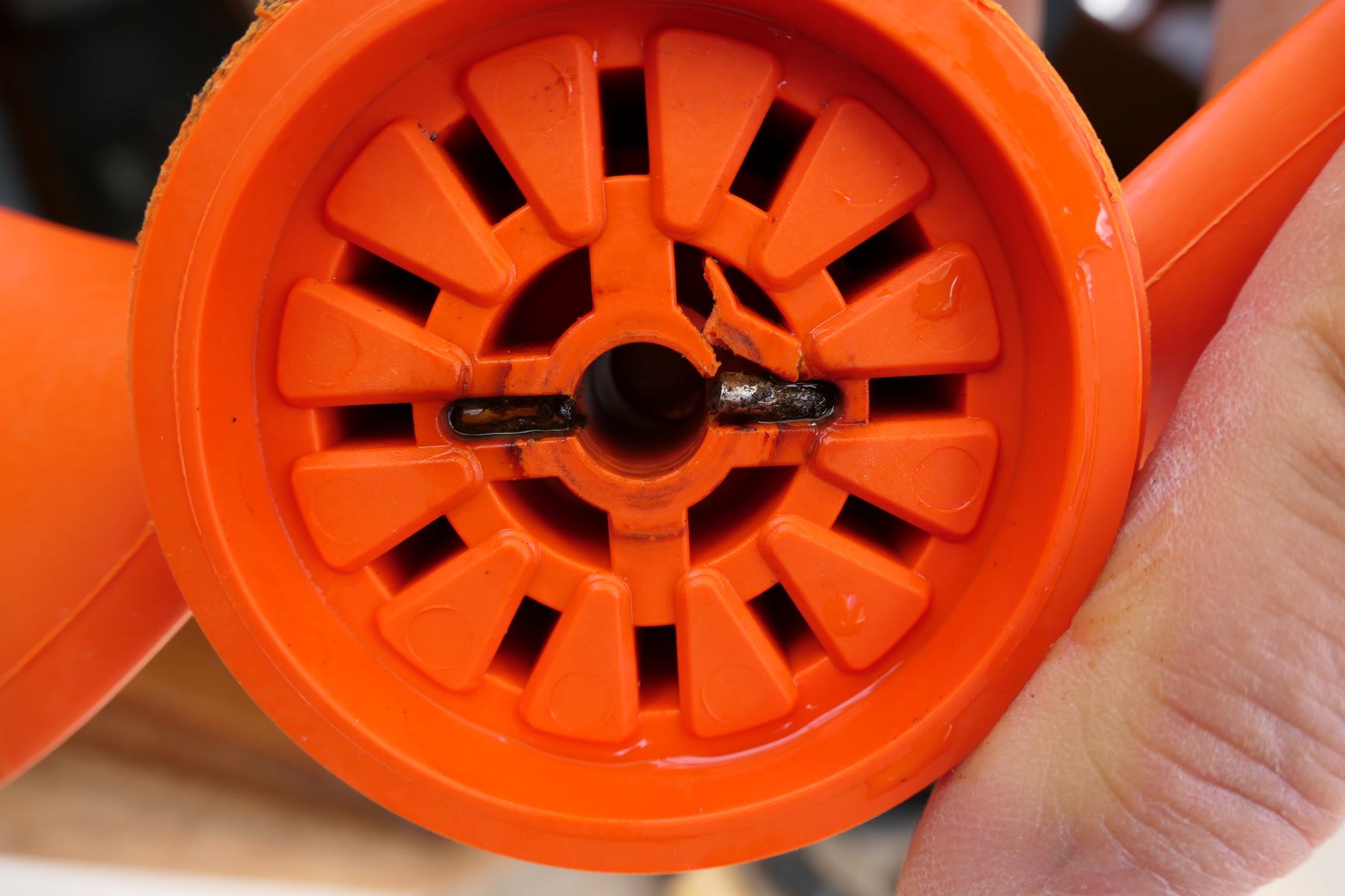 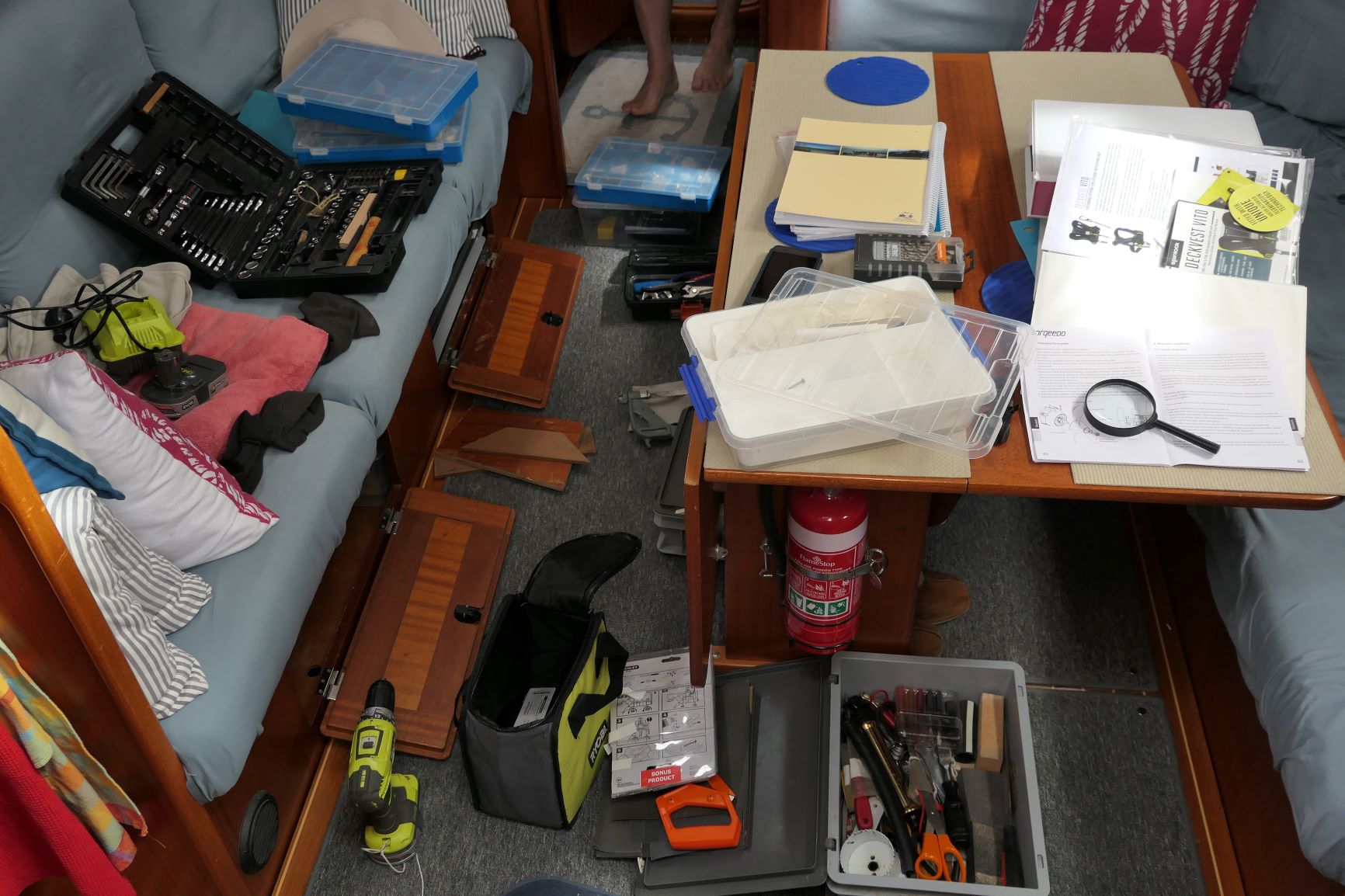 The next day we needed to move as a northerly was approaching.  We retrieved the two anchors with only a bit of palaver and reanchored at the northern end of the beach. 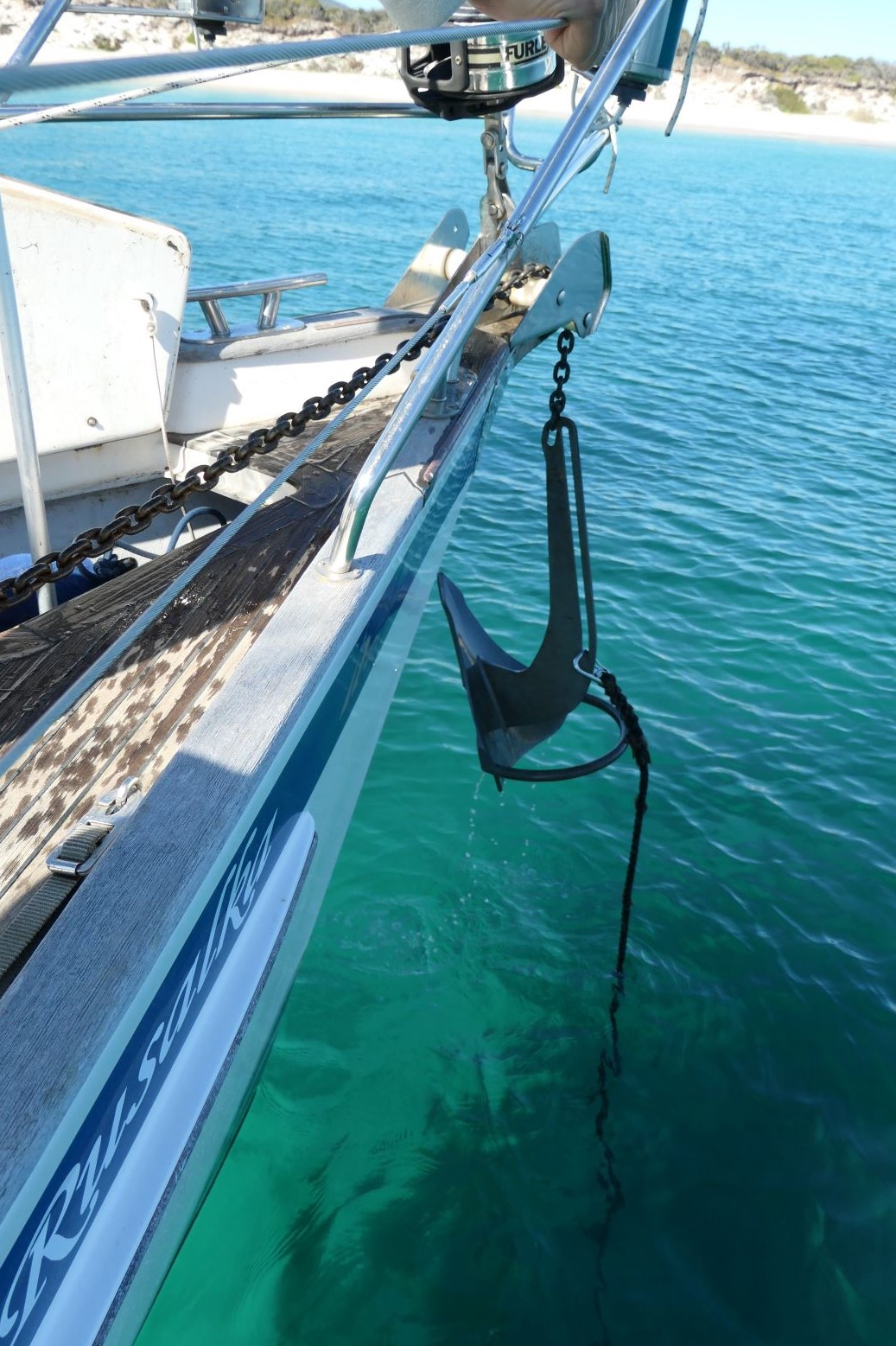 Unfortunately, the swell there was unbearable and so we decided to beat a retreat south to Bryan’s Corner on the inside of Schouten Passage.  It was a windy, but safe anchorage.  The next morning, we decided to head back to Orford in Prossers Bay.  It’s been difficult for us to make plans – two different perspectives on what the weather forecasts mean for us.  I (Jackie) am prone to be reluctant to head out if there is any significant wind forecast, while Alex would be happy to press on.  Without having a firm destination that we have to get to, it is tempting (for me at least) to stay in the safety of the known.  Alex is trying to balance the desire for adventure with the desire to keep me comfortable and happy.  So we headed south.

It was a wild ride with a steady 25-35kt NW behind us and 1-1.5m chop trying to throw the boat around.  We were reefed right down, doing 7-8kts for 2 hrs, then there was a brief lull and a front came through from the WSW at 25-30kts and meant motoring the last hour or so into Orford. 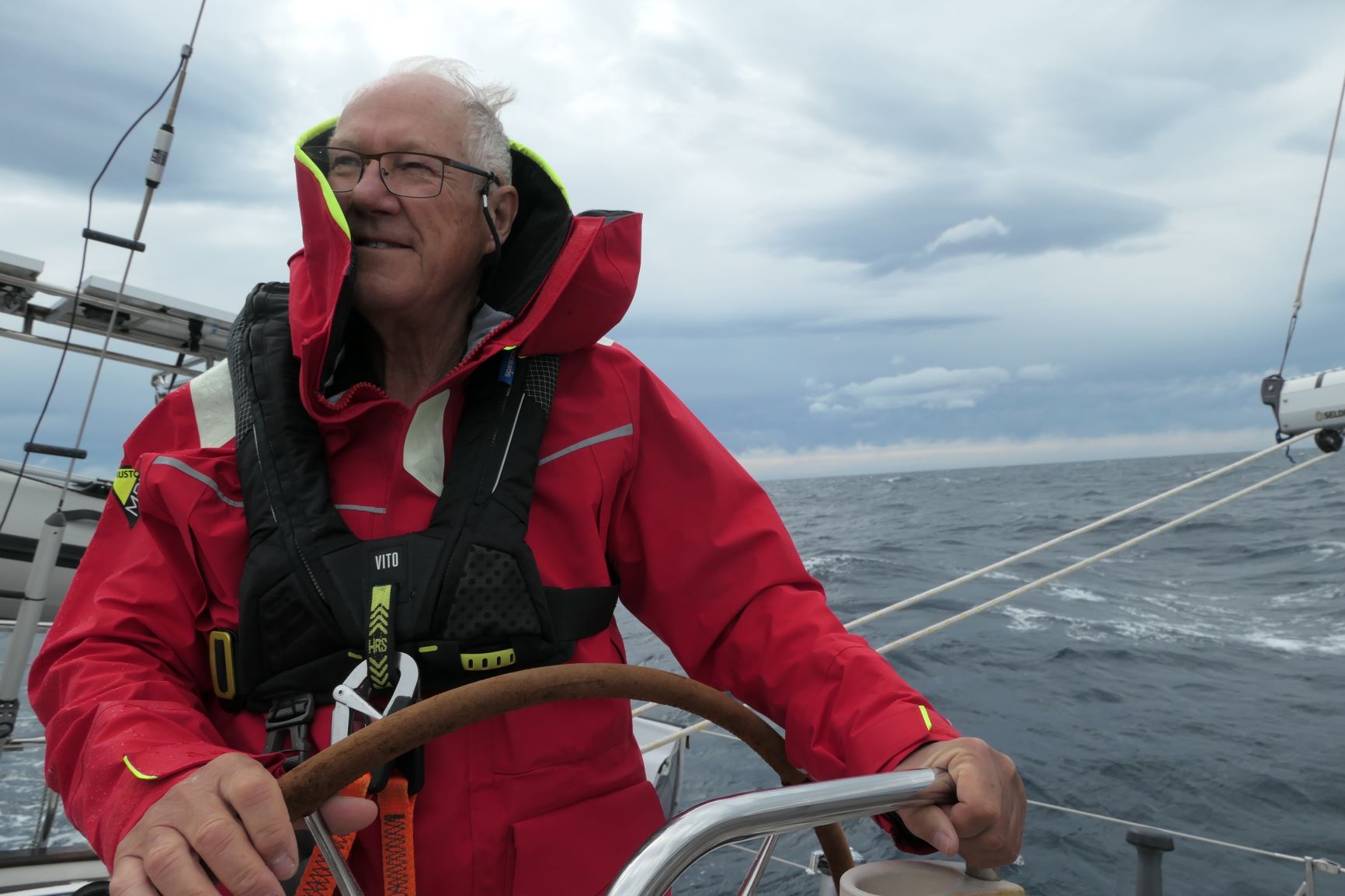 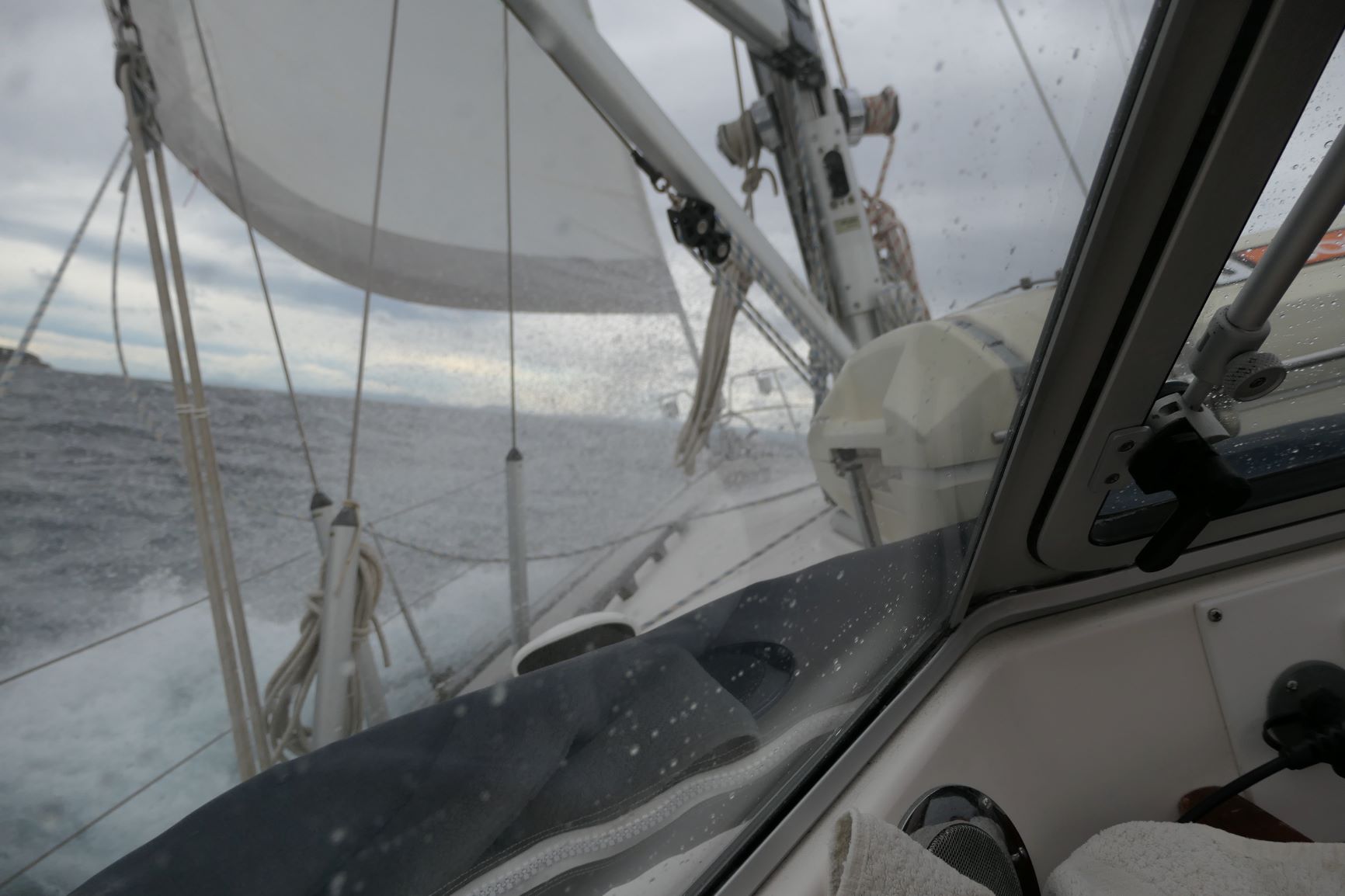 The next morning, after reprovisioning in town, we made a final decision to give up on heading for Bass Strait this summer.  We’ve had a good summer’s cruise so far, but it’s getting late for getting up to Flinders and spending much time exploring there.  There is another strong low coming through early next week, so we decided just to have a couple more days back at Schouten, then return to Prossers Bay to wait out the SW winds of the low. 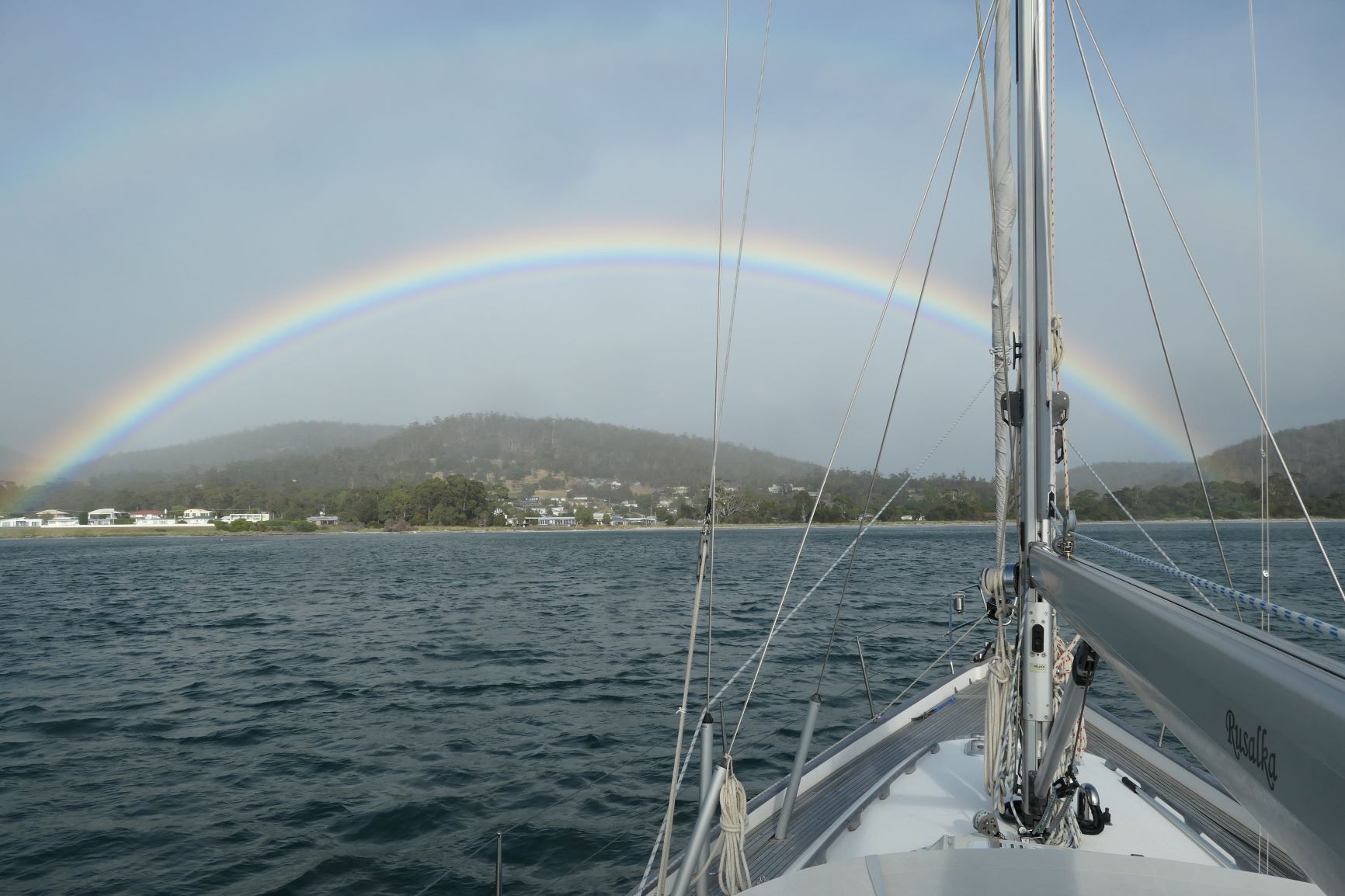 We set off again in 20-25kt SSW and chop, heading to Schouten.  It was a fast trip, but not as wild as the day before.  Oddly there was an unpleasant swell from the west coming into Crocketts and Moreys bays at Schouten, but we anchored (on the third try!) and made the best of it. 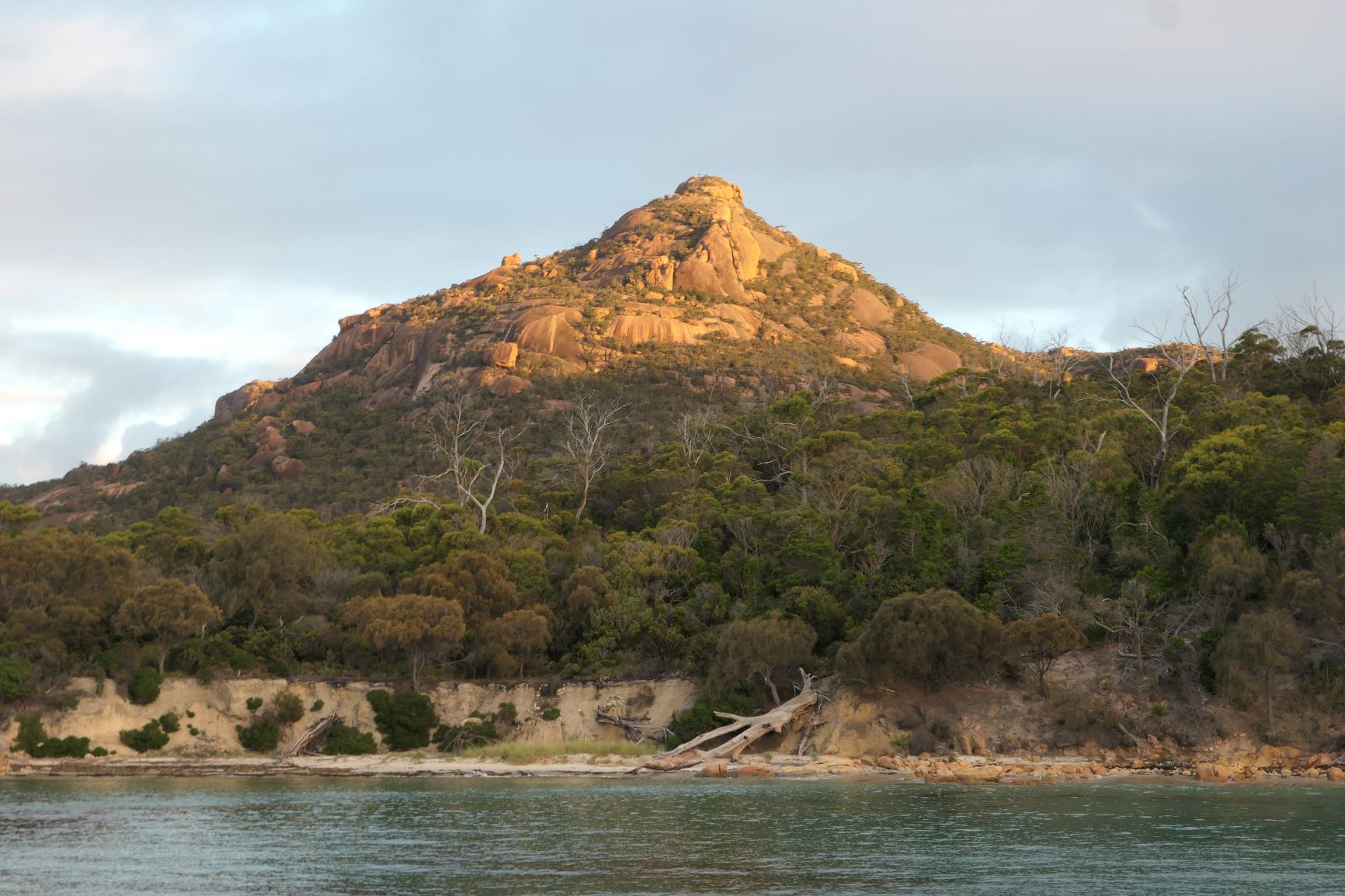