Pedra Branca is one of 3 rocky outcrops south of Tasmania.

Pedra Branca Island rises 60m and has an area of 2.5 hectare. It is a big mound of a rock. About a mile to the east, Eddystone Rock spectacularly rises 30 metres vertically, which from a distance, looks like a modern office tower in the middle of the ocean. A further mile to the east is Sidmouth Rock, a collection of rocky outcrops and shoals only a few metres above sea level.

Sighted by the explorer Abel Tasman in 1642, he chose the name because it looked similar to Pedra Branca, a rocky island near Singapore. In Portuguese Pedra Branca means “white island”, where guano covers most of the top of the rocky island.

It can be a dangerous and wild place.

A biologist conducting a survey of nesting birds was swept off in wild weather in 2003. At the time, the Cape Sorell buoy off Strahan recorded 14m waves. As the Age newspaper reported “Mr Saunders, wearing wet-weather gear, but no life jacket, was caught when a wave washed over a saddle 40 metres high, casting him down the rock face and into foaming water….“.

In 1973 a 250 tonne Japanese fishing vessel hit Pedra Branca and sank within minutes. All but one of the 22 crew were lost.

Extreme surfers have made expeditions to ride the huge waves - not for the faint hearted or the novice.

The island, and the nearby sea, teams with bird life. Various gulls, gannets, cormorants and the shy albatross nest on the island.

Like most places, it’s not always wild and dangerous. On a clear day it can be seen from mainland Tasmania. Picking the weather and sailing at 5 to 7 knots, the 44 nm return from Recherche Bay can be a pleasant day trip. 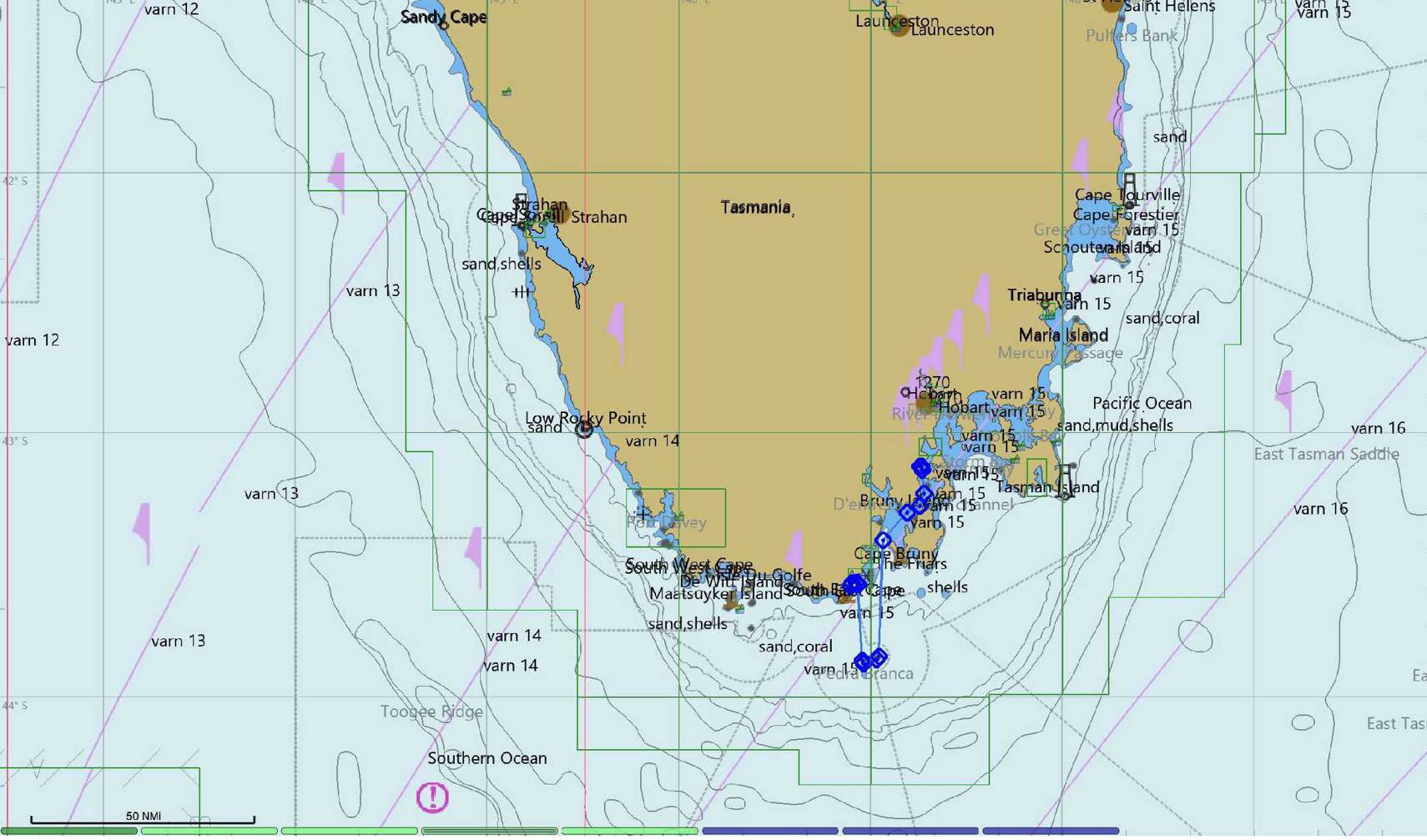 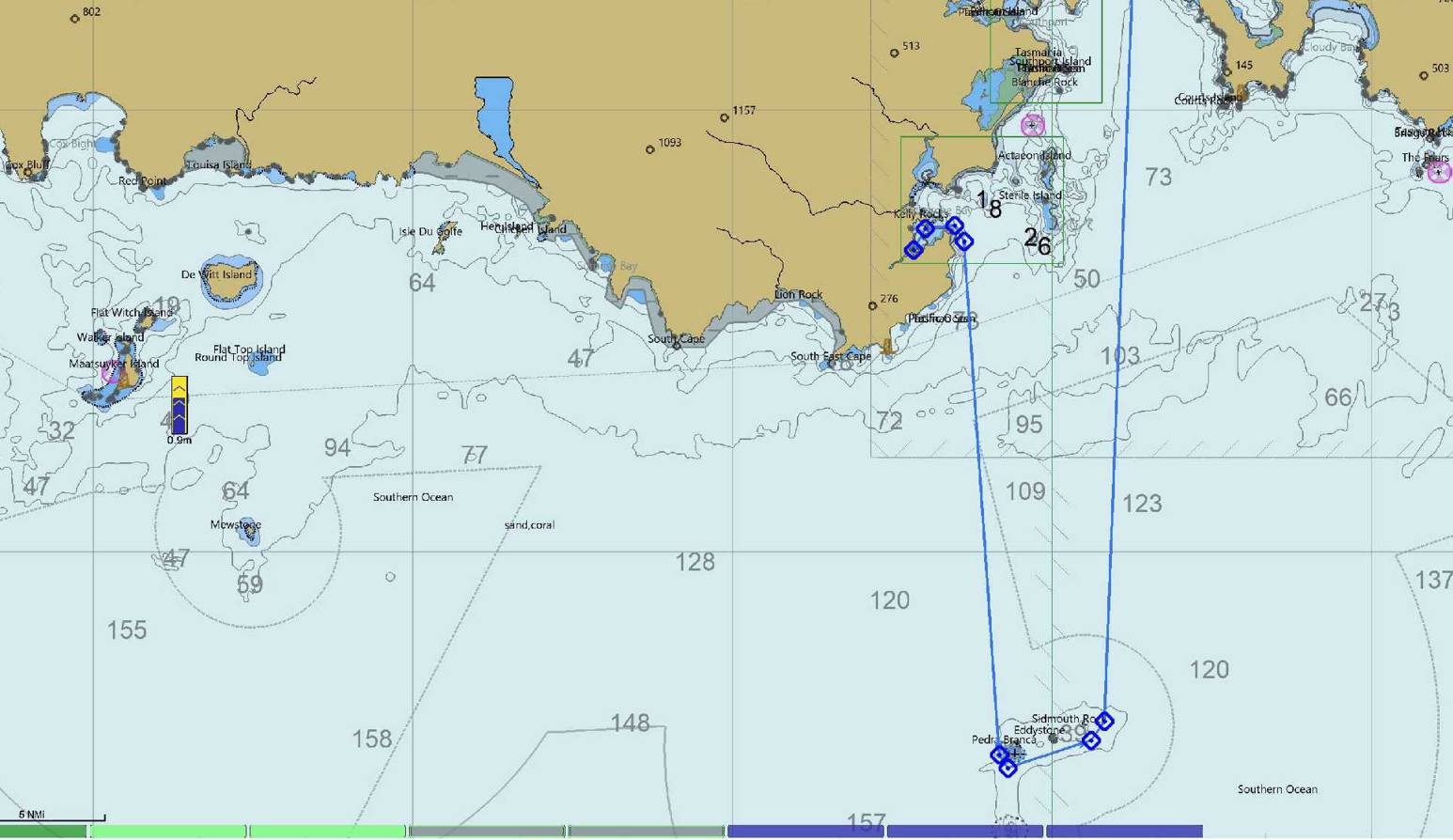 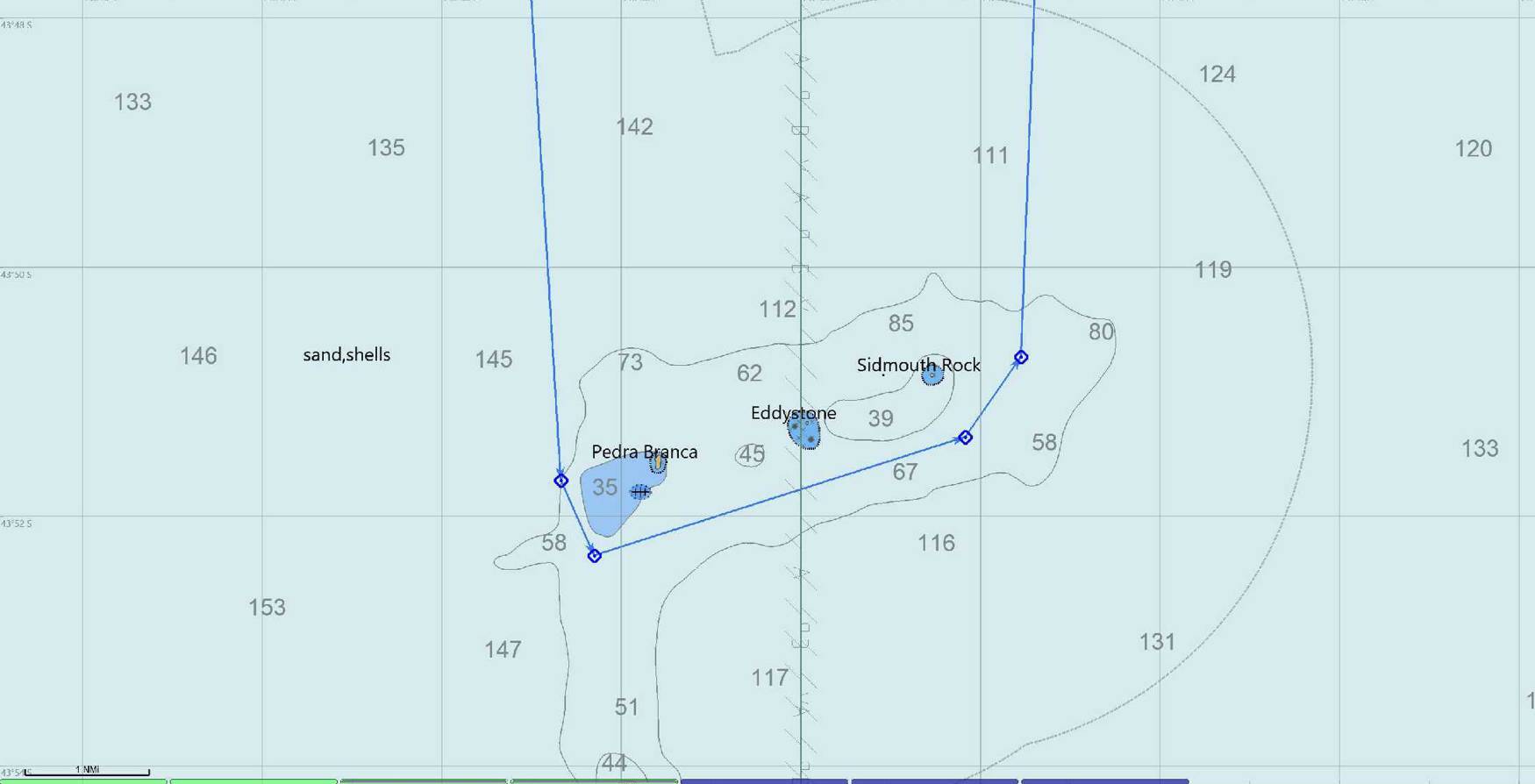 Checking the weather forecasts during the previous week, Saturday would have light winds and on Sunday morning there would be 25 knots westerly winds for the sail to Pedra Branca.

Not very early on Saturday 14 November, I set off solo on Rusalka from Kettering for the 35 miles to Recherche Bay. No wind, so it was motoring. Just off Southport, with the crayfish season starting, it was good to see the police approaching vessels checking on cray catches. 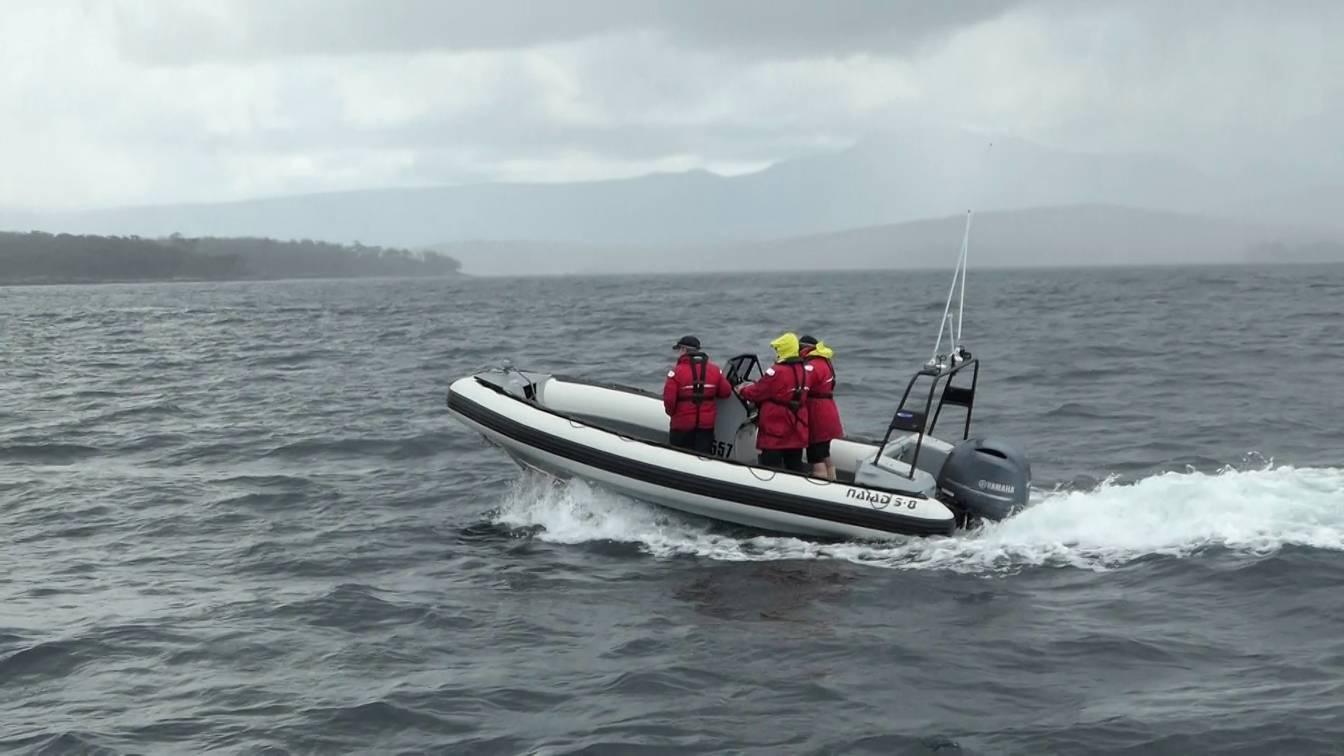 Saturday was an early night as the alarm was set for first light Sunday, 4:45am. Sunday, up by 5am, a quick breakfast and an early start…. until…. 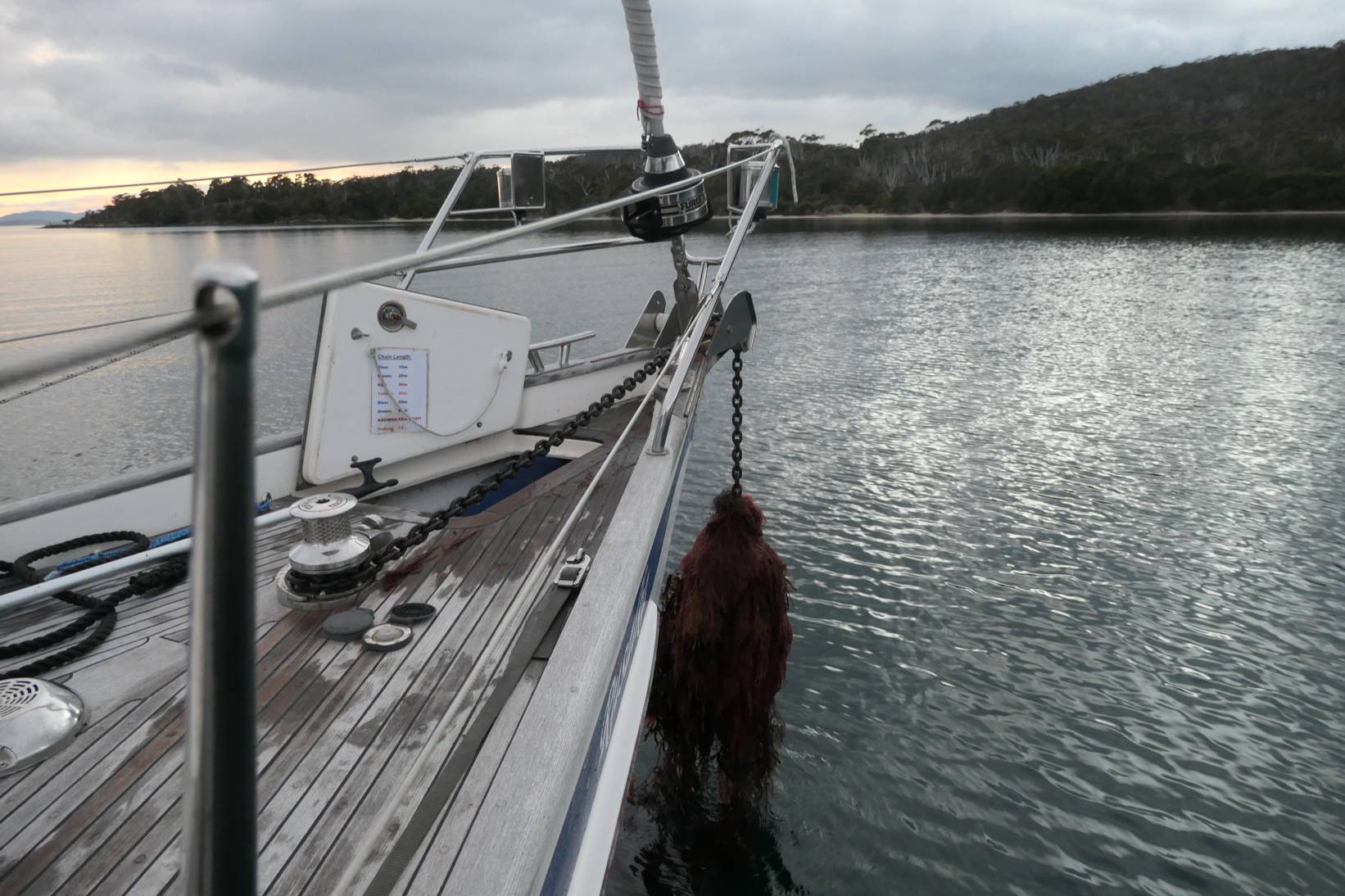 Getting that knotted mess of weed off the chain and hook took time and I finally got under way at 5:45, so much for the early start.

A new item I installed earlier in the year was the Hydrovane wind vane steering which I’d set up to give it a run in open clear air. Hopefully there would be reasonably steady wind and seas. There was no wind. I was beginning to wonder whether this was going to be motoring and wallowing all day. By a third of the way the wind came, so sails up, engine off and trim the Hydrovane steering. After a little while I was sailing with wind steering in gentle 15 knots winds. Soon the horizon cleared a bit and Pedra Branca and Eddystone Rock could be seen.

Albatross are always beautiful to see as they circle and glide so close to the water, at times their wing tips touch. Flocks of gannets were disturbed as Rusalka approached them sitting in the water. Some of the gulls were as large as the albatross.

I planned to sail around the west of Pedra Branca, across the south of the group of islands and then round Sidmouth Rock to head north back home. Sailing so close to these magnificent outcrops was a wonderful experience. They look unexpected, but at the same time quite natural to be here. 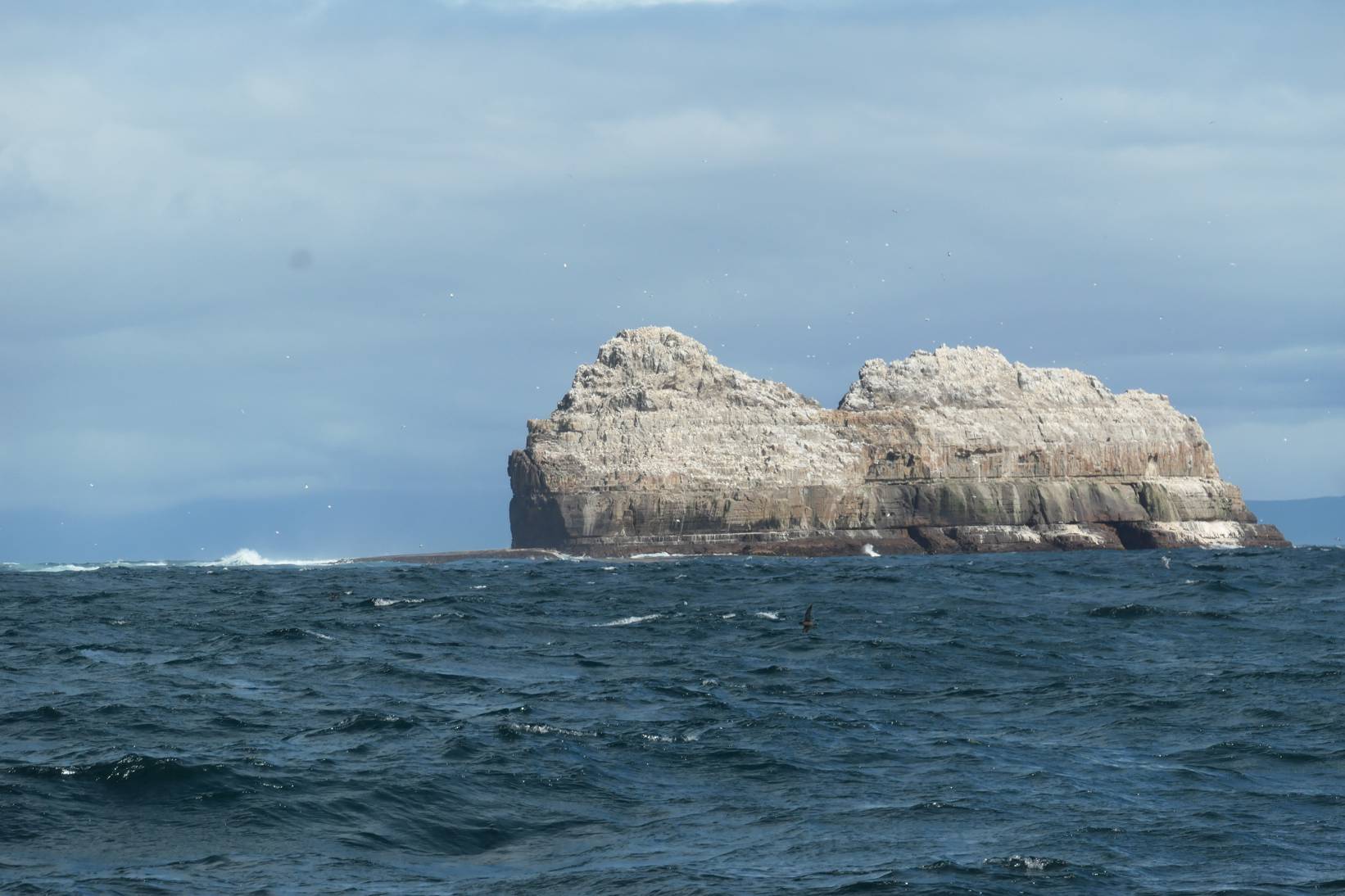 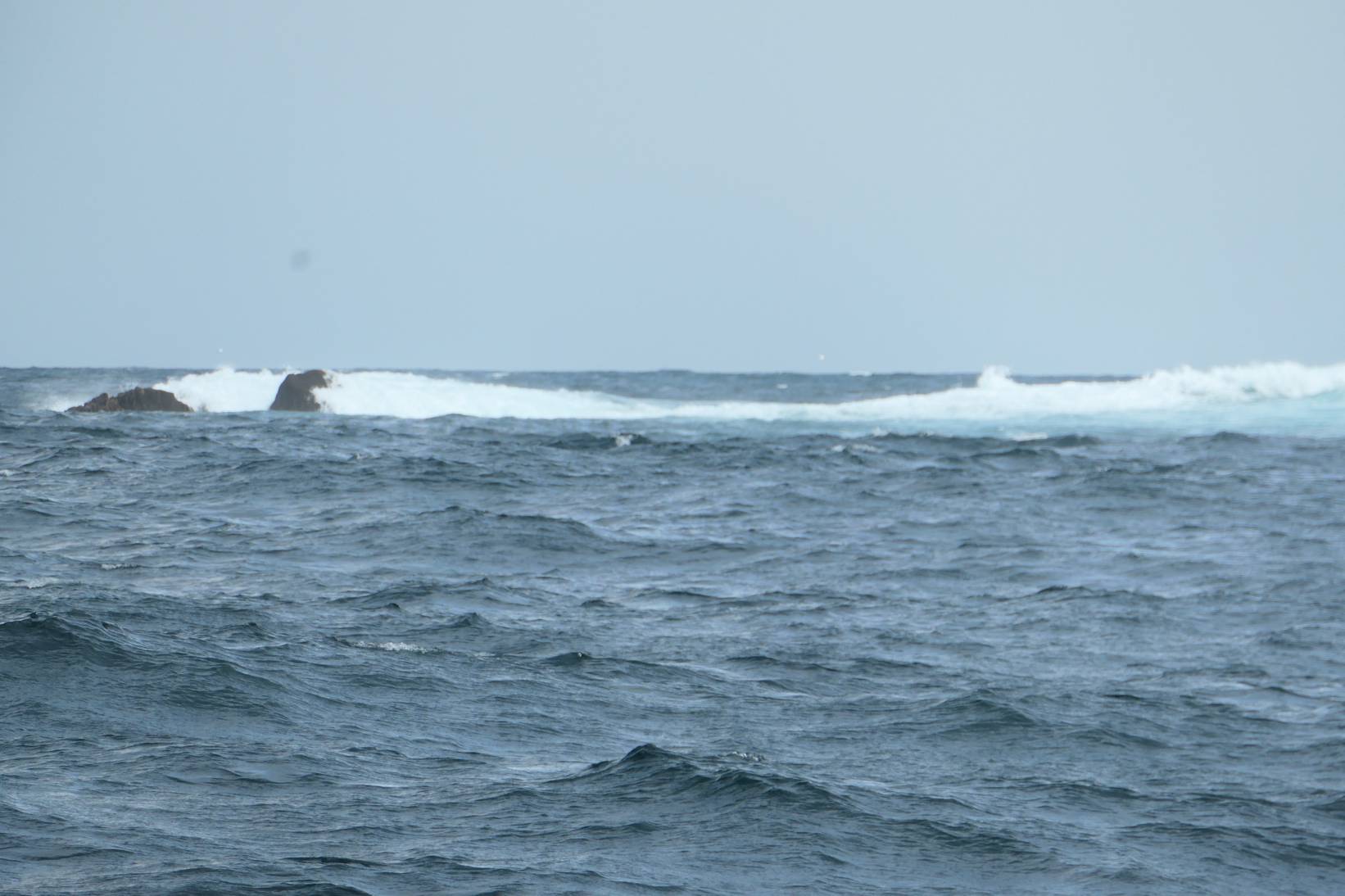 I used the Hydrovane to do all the steering, including gybing around Pedra Branca. The stronger the wind the better it performed. Approaching Sidmouth Rock, the wind picked up and seas increased. In 20 – 25 knots rounding Sidmouth then heading north, unencumbered by headlands and reflected waves, it was glorious sailing and the Hydrovane was managing it all effortlessly. As it was not too late, I decided to continue all the way to Kettering, finishing a long 13 hour day. 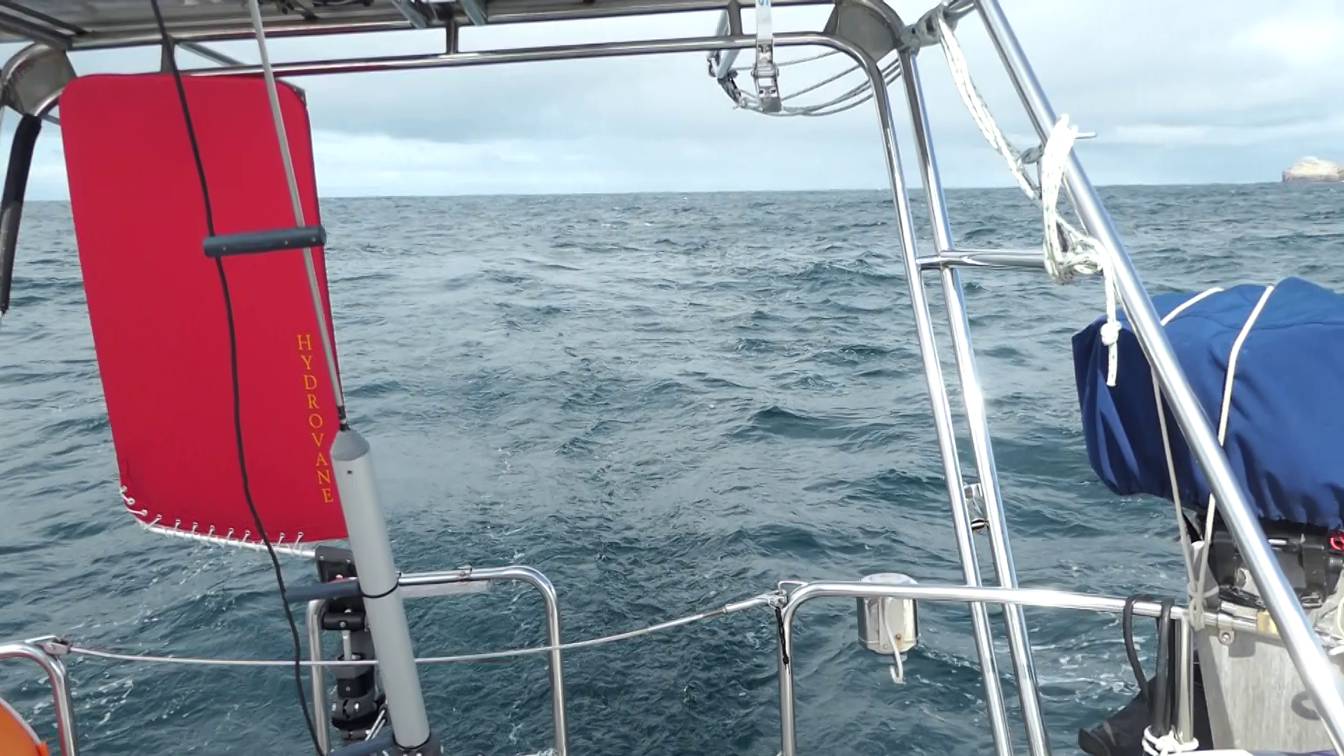 It’s hard to write about a simple trip to one place and return without stopping, exploring or otherwise doing something there. But the sailing itself and just to see the birds and these beautiful outcrops was a wonderful, fulfilling and enriching experience.