Heading back to Hobart

We spent a busy 1 ½ weeks in Hobart picking tomatoes, weeding, and celebrating a significant birthday and then, when we saw a nice big weather window approaching, took the bus back to Beauty Point.

Since we had a good forecast for at least 4-5 days we decided to just do day hops home.  The first day we raced out of the Tamar River with a 3+ kt ebb tide and made our first stop at the delightful Croppies Bay with just enough time to catch 2 large flathead for dinner. 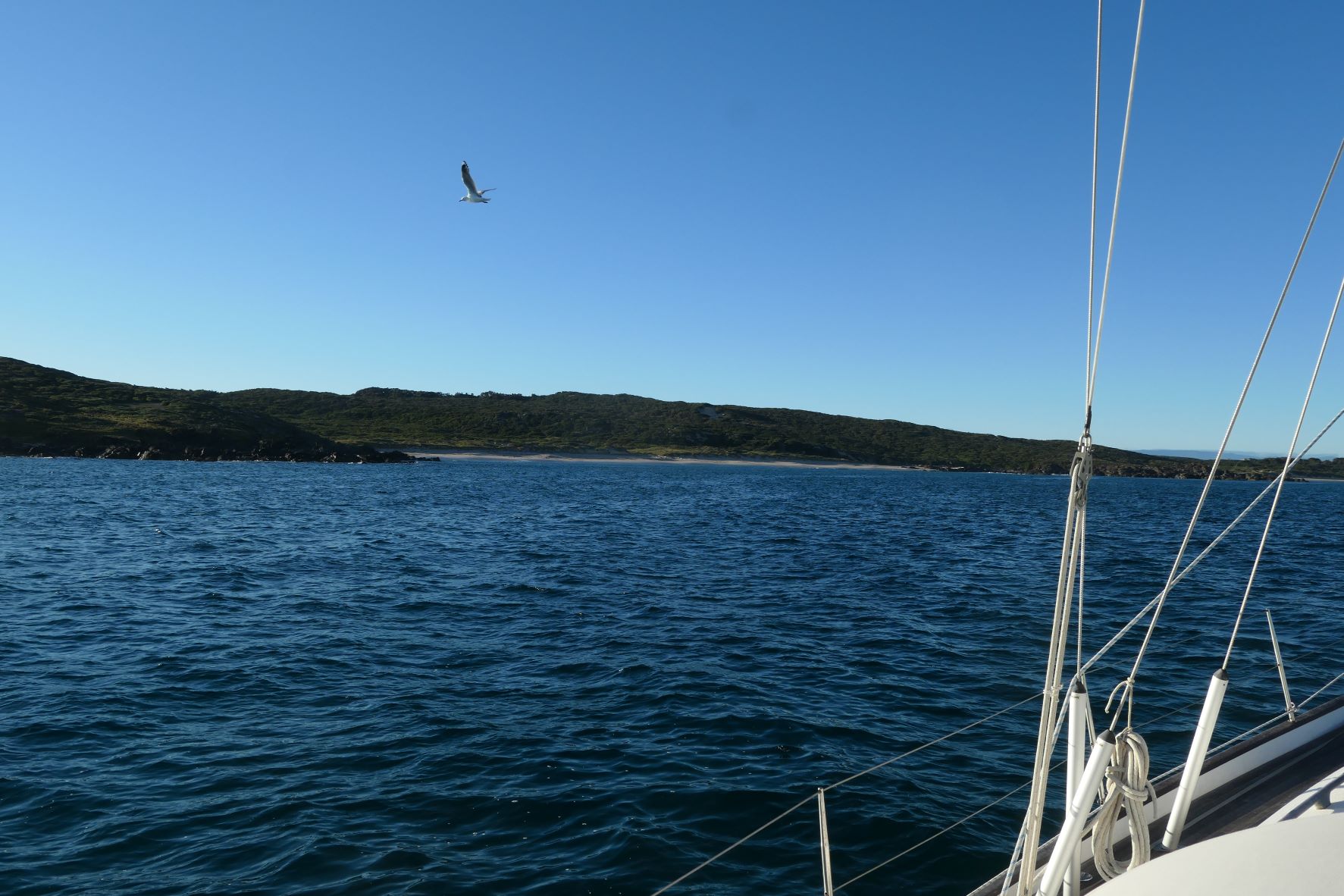 The next day we did just a short 3hr hop to Foster Inlet and tucked in next to the windfarm.  It was a lovely day and I spent far too much time in the sun fishing.  I caught only one (big) flathead, but hooked three gurnard – the first time I’ve caught this type of fish.  Gurnard have poisonous spines so you have to be very careful handling them.  We decided to keep one fish for a future chowder (or bouillabaisse!)

We set off at first light to catch the ebb tide through Banks Strait.  Unfortunately the wind was stronger than forecast against us and the tide, so it was a very lumpy transit with steep short waves smacking the bow.  Things improved as we passed Eddystone light and we pulled up a mooring at Binalong Bay in late afternoon.  I was expecting a horribly rolly night as the swell was from the southeast, but it wasn’t too bad and we got some sleep.

The following day was a long one – 70 miles to Schouten passage.  We left early again – there wasn’t much wind and so we motor-sailed the whole way.

We stopped that night at Bryans Beach which was peaceful, although the swell did come in.  The next day we headed to Maria Island, meeting up with Cocomarje, the HR40 that we saw in Beauty Point in January.  It was good to see them again before they head off to the mainland to continue their circumnavigation of Australia. 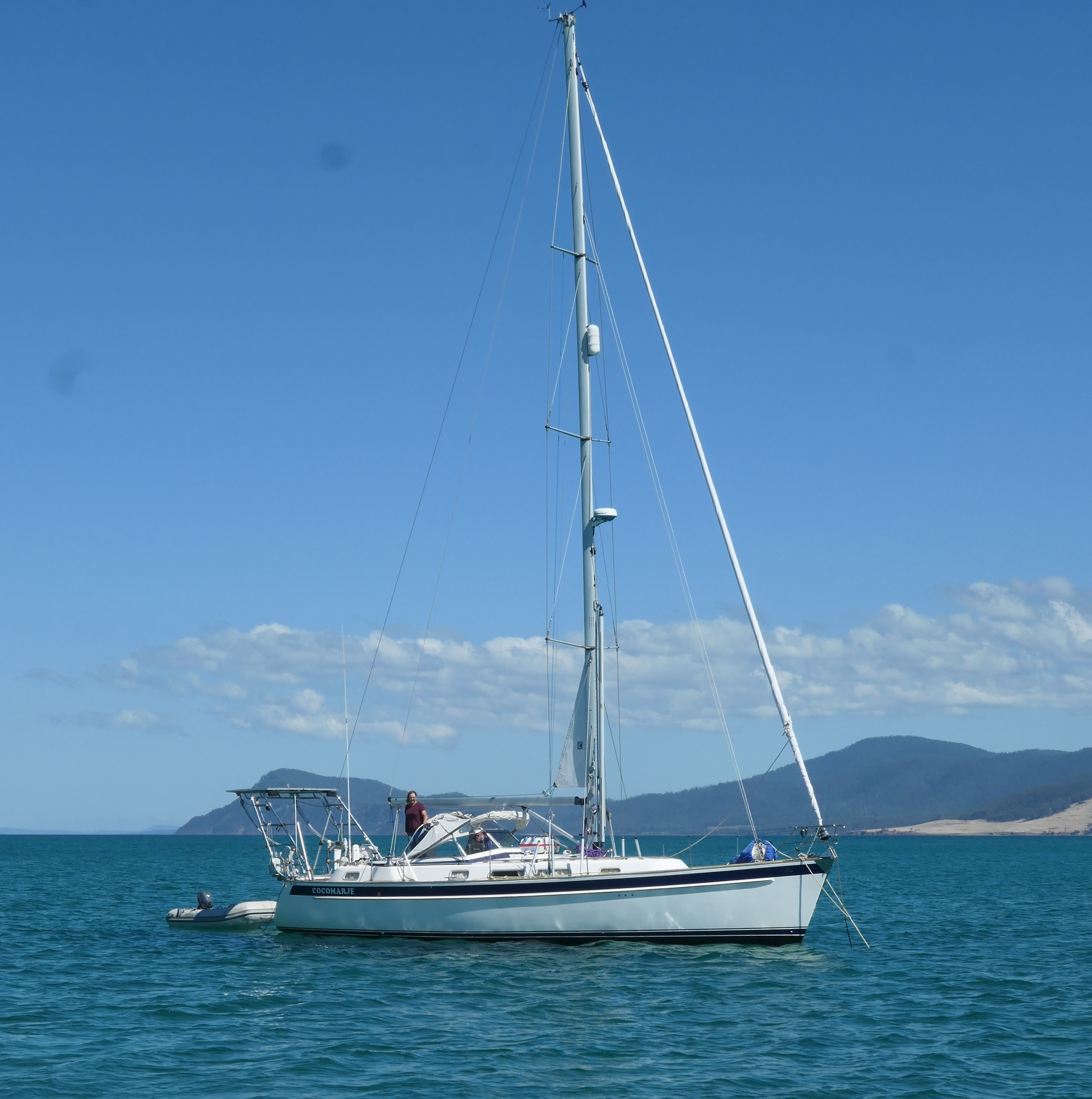 We tucked into Deep Hole in Shoal Bay at Maria Island as we were expecting a wind shift from the NE to SE overnight.  Almost 20 other boats had the same idea (it was a long weekend and everyone who could be was out on the water!) so we were surrounded.  We set our alarm for 3:50 am (so that we could get to the Dunalley Canal in time for the 8 am canal opening the next day) and went to bed early.  Around 9 pm the wind shifted and came in gusts up to the low 20’s.  Our lovely new Ultra anchor took longer to reset itself than I’d expect – perhaps because it was pulling downhill into the Deep Hole – and we found ourselves closer to Cocomarje than either of us would like.  So we re-anchored back in our original position and went back to bed.

Four o’clock came too soon and we set off in the very dark morning for the canal.  We crossed the bar at Marion Bay at sunrise and reached the canal just before opening.  Six other boats followed us through. 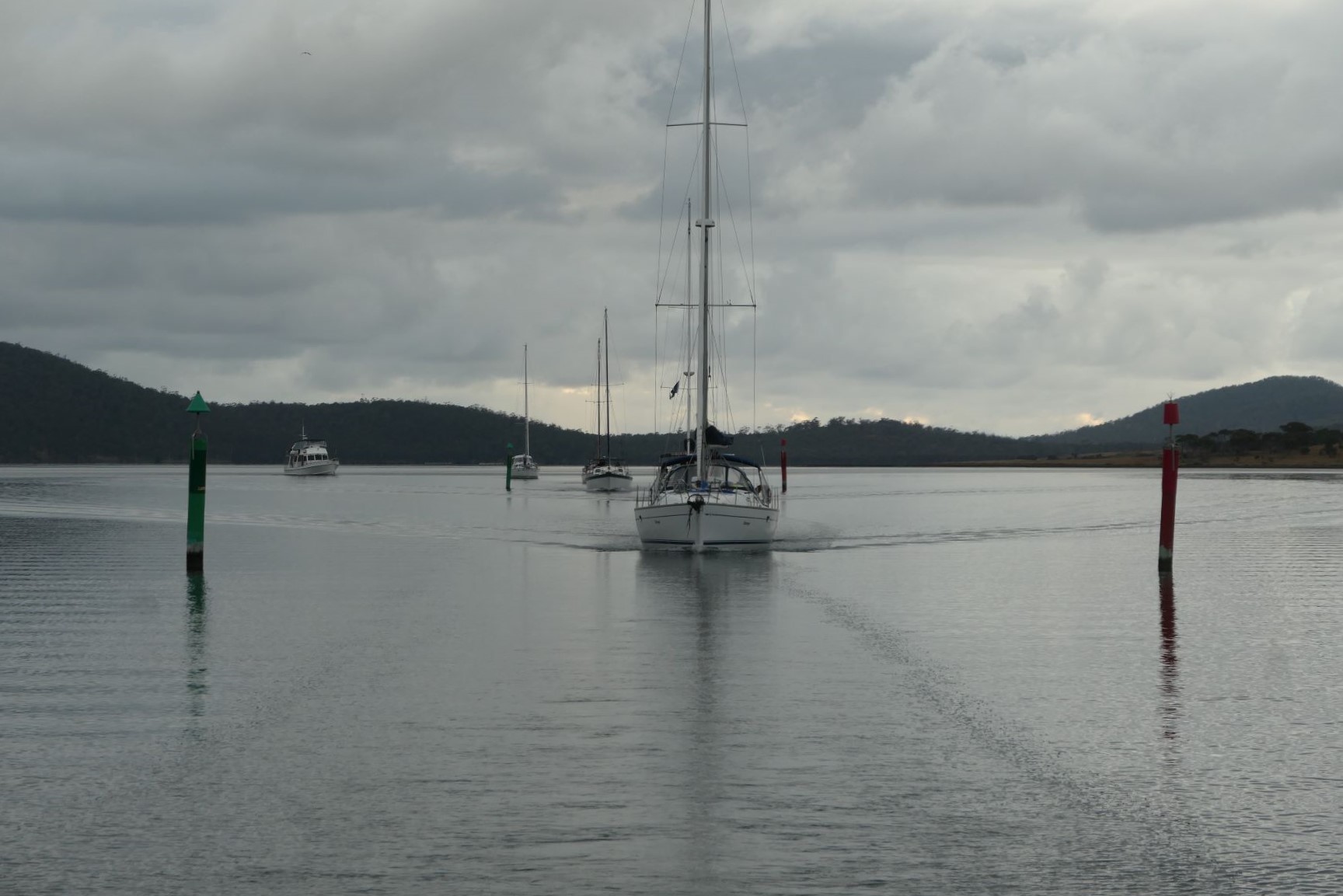 Once through we decided we were feeling pretty good and decided to head all the way back to the Channel.