It was a relatively short run (32nm) from Bridport to Foster Inlet.  We arrived around 4pm in a 15kt SW, which was rolling strongly into the bay.

We tucked up behind Maclean Island, which gave us some shelter from the swell, to await the easterly that was due to arrive later that day. 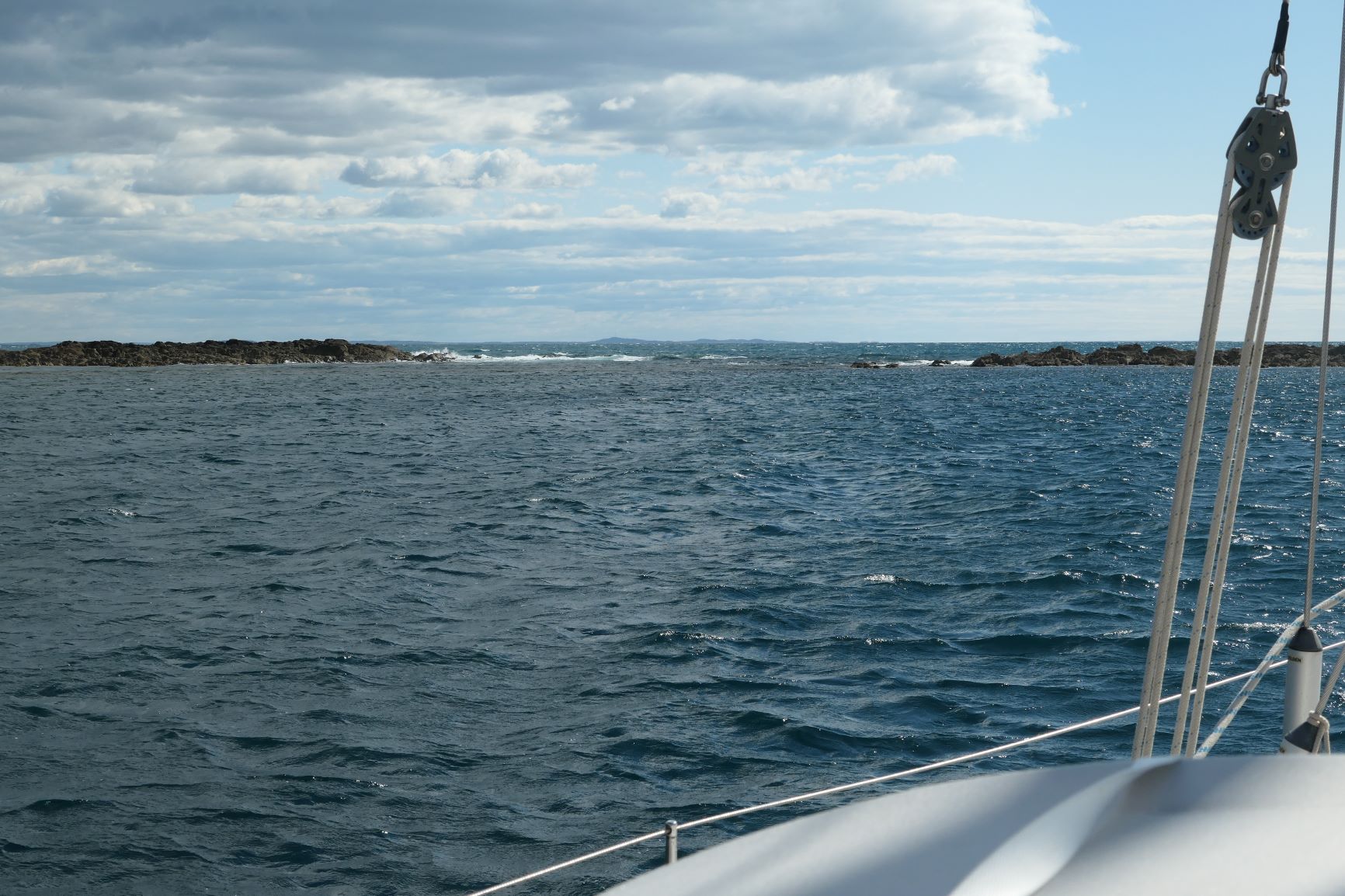 Around 7pm the wind and swell dropped and we moved across to anchor off the beach for the night.  The next morning around 9am we motored out under the watchful eyes of the wind turbines and headed through a gentle Banks Strait.

We did a drive-by Swan Island on the way and were surprised to see a helicopter land on the beach in front of us and a small plane come in just after.  Must be some VIP and his entourage! 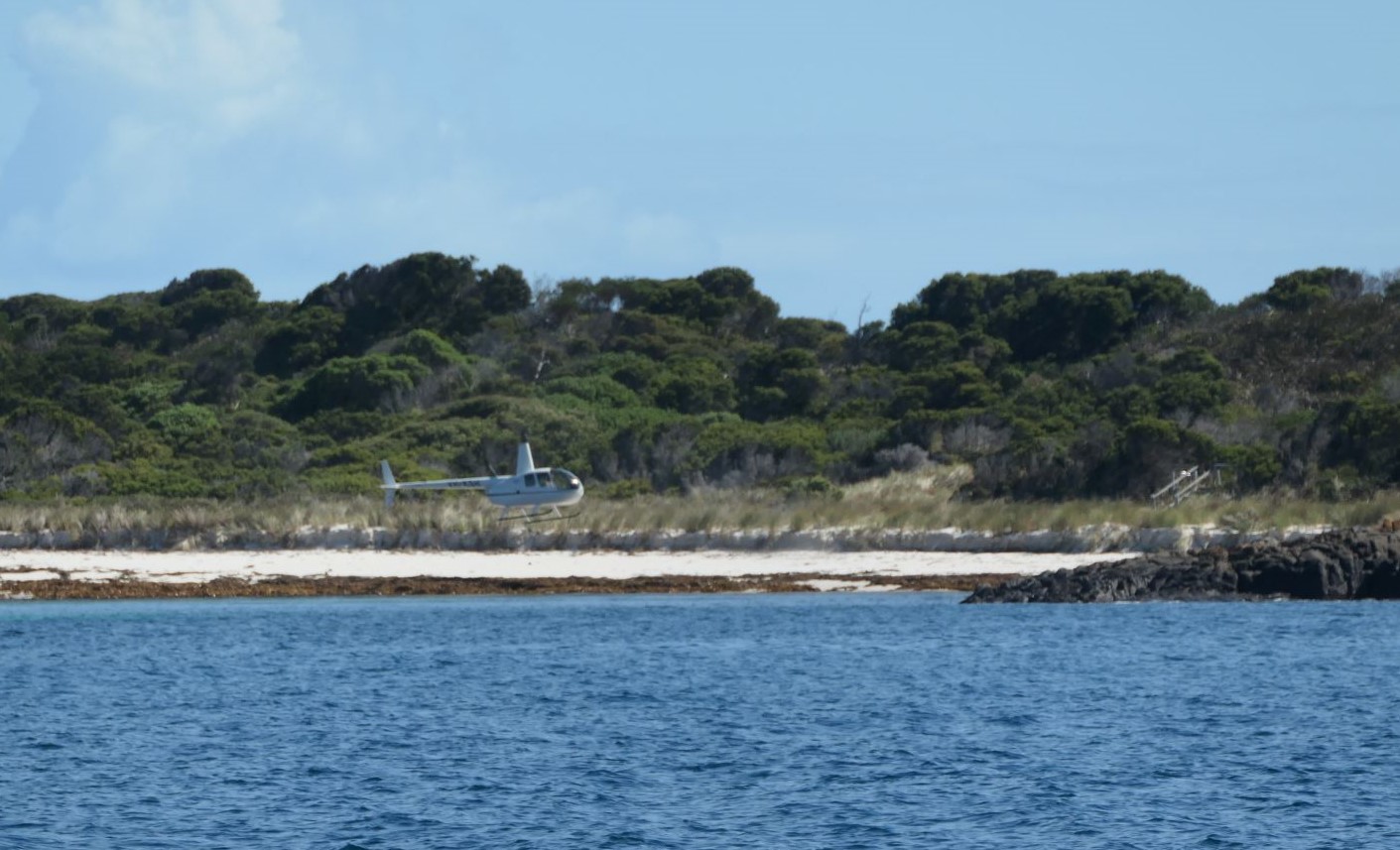 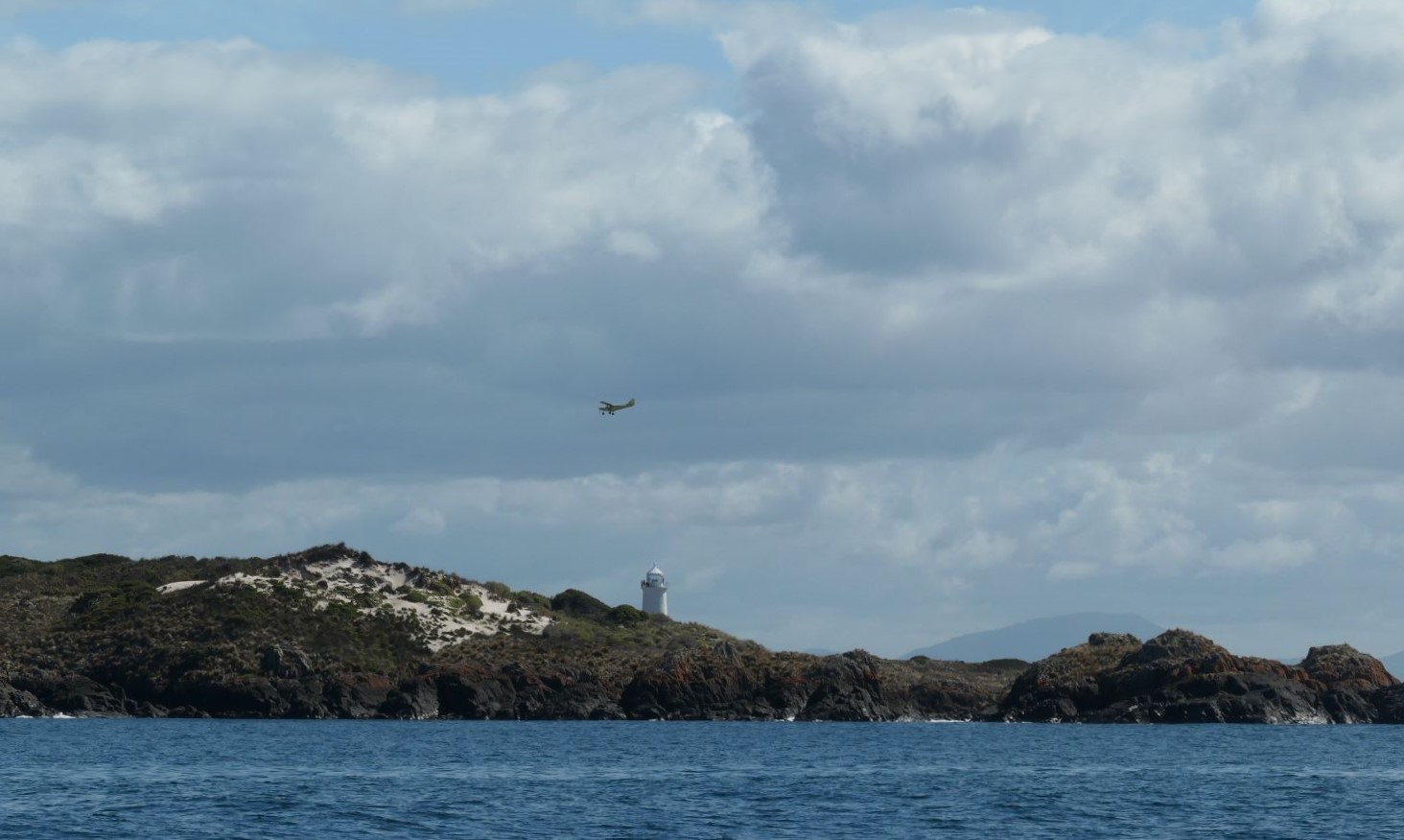 The northerly wind came up as we neared Eddystone Pt and we were able to put up the sails, which soon had to be reefed as the wind strengthened.  As the wind and swell were behind us (but from slightly different directions) we tacked back and forth, staying as close inshore as felt comfortable to avoid the worst of the wind and swell. Here is our track as seen on Marine Traffic: 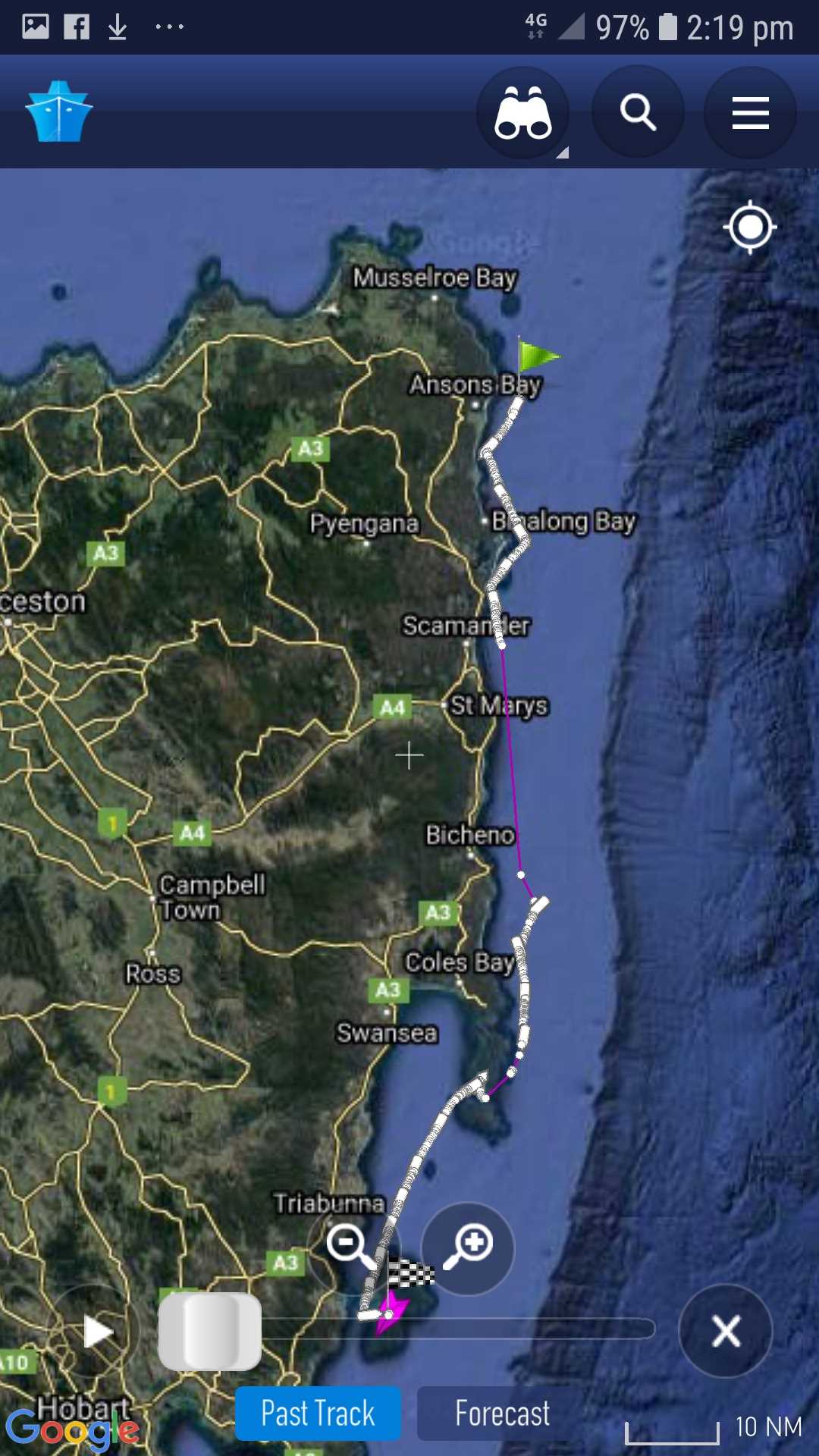 For about 5 hours during the night the wind got up to 25—30kts and the seas tossed us around a bit.  I was holding on in my bunk as we hadn’t put the leeboards in place.  Then about midnight the wind died away completely.  Alex went to turn on the engine and nothing!  (There’s nothing to wake you up quickly quite like the sound of a dead battery!)  Fortunately, we have a quick switch to bridge the house batteries to our starter battery and were soon under motor again.  We arrived at Bryan’s Corner on the Freycinet peninsula at 3 am and anchored amongst ten other boats.  Alex had a shower and wee dram of whiskey, then off to sleep for a few hours.

I woke up at 8 am, convinced that we needed to get to Maria Island, 5 and a half hrs away, before a strong wind in the afternoon, so I chivvied Alex up and we got underway quickly.  The least I could do was make him a nice cooked breakfast underway! 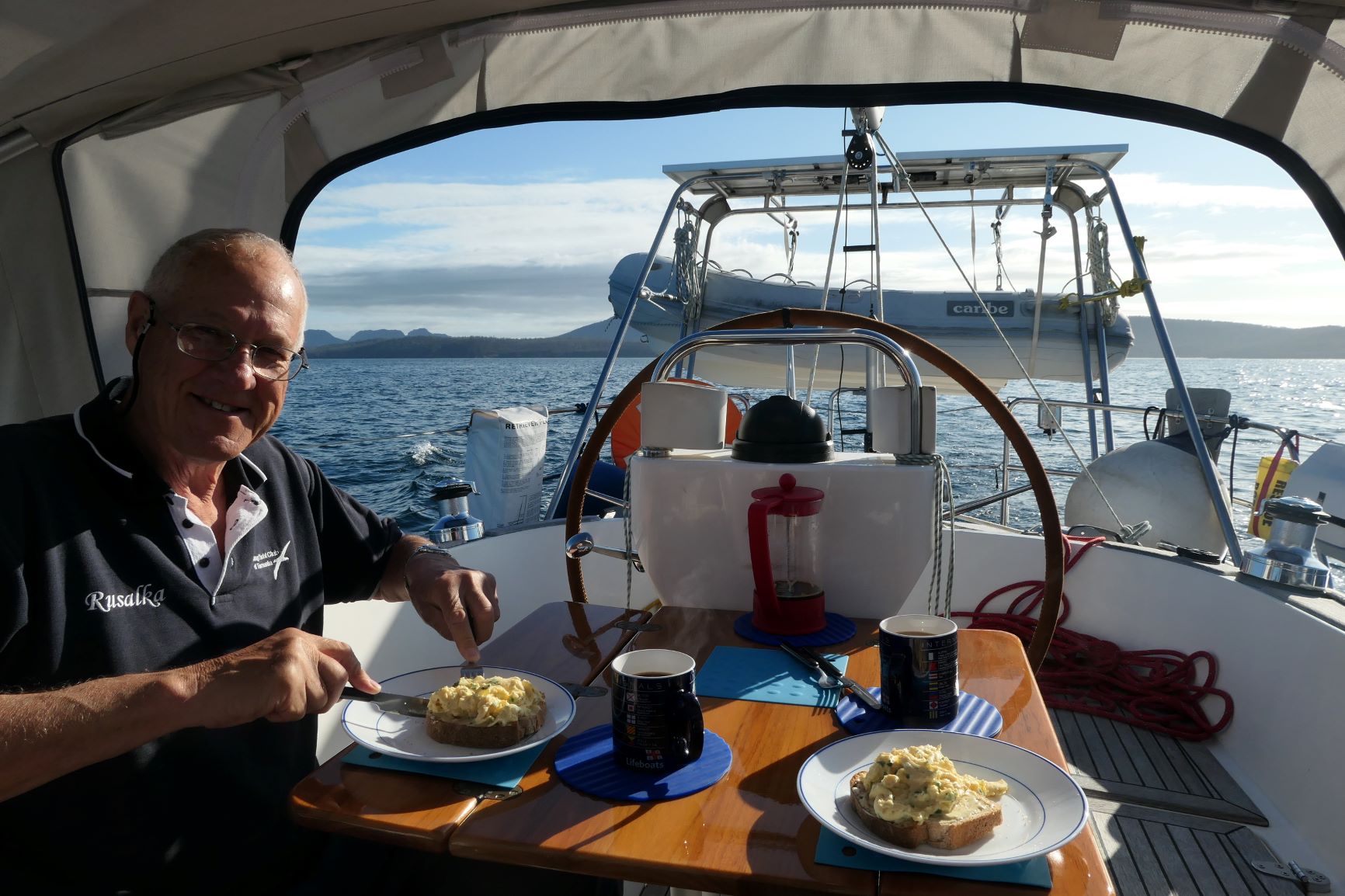 It turned out we didn’t need to race, but at least we got to Maria in time to have a nap before going for drinks on board Crown Venture.  It was lovely to catch up with Russell and Mark again.

This morning we walked across the isthmus to look at the surf beach in Riedle Bay. We found some clams that had been tossed up on the beach – just the thing for a chowder! 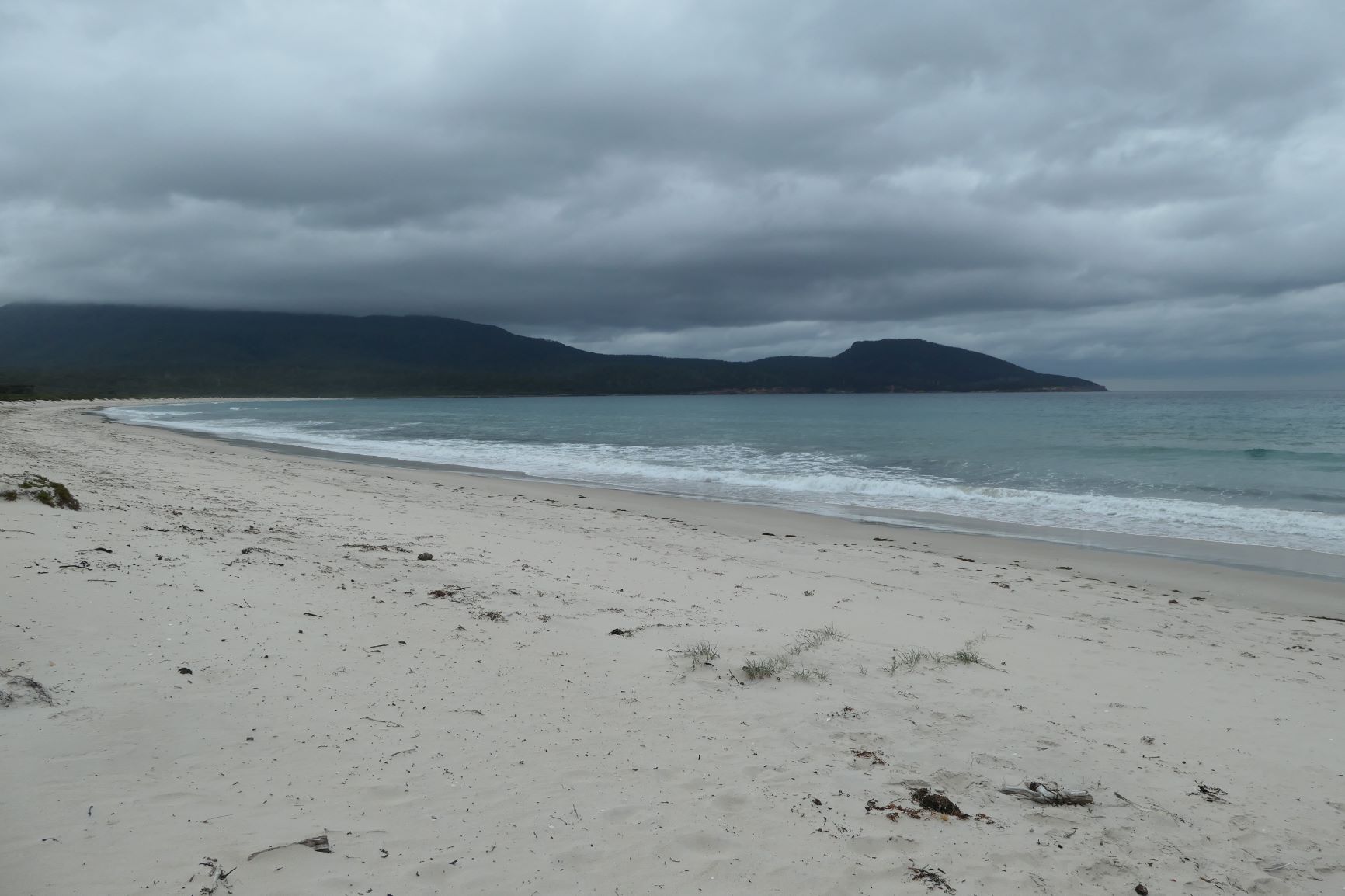 When we got into the dinghy we noticed a huge amount of weed on the rudder and prop.  An excuse for Alex to go for a swim!  The water temperature was 17.5oC so after putting on a wetsuit and setting up the hookah, Alex quickly cleared the weed and had a good look at Rusalka’s under bits. 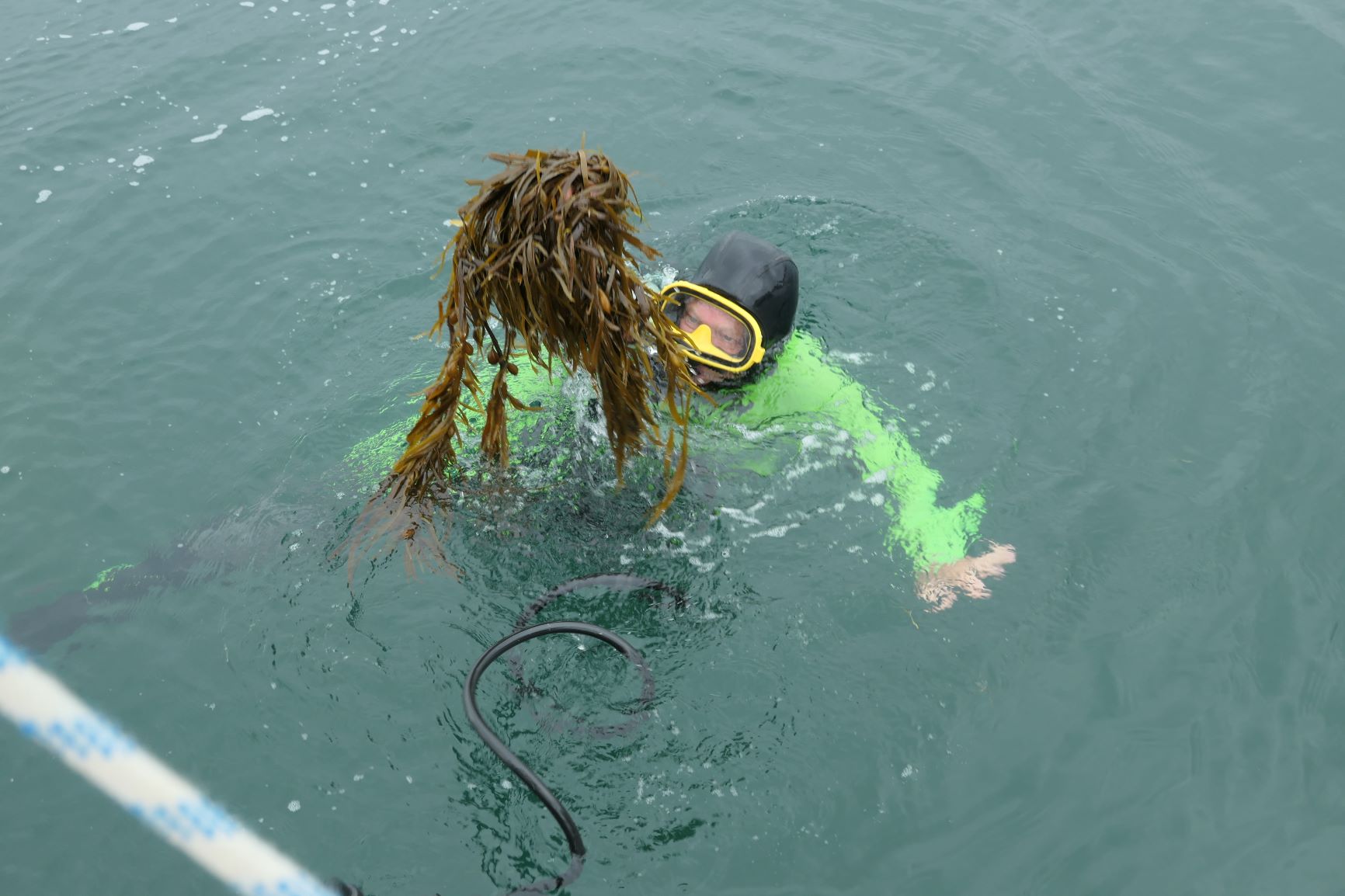 Other than a coating of mud on the keel and rudder from Launceston, she looks good.

The plan for the next few days is to stay in the area, moving to Orford tomorrow for shelter from westerly winds.  Then we'll decide where to next - stay tuned...