We spent 2 days enjoying the Orford anchorage while the westerly winds blew themselves out, then set off early Tuesday morning for Wineglass Bay.

We tucked ourselves into the SW corner as best we could to avoid the inevitable swell that rolls into the bay. As we were putting the anchor down I noticed a little penguin swimming around the moving anchor chain!  Soon it had popped up next to the boat and was pirouetting around, to the surprise and annoyance of nearby seagulls.  It continued this strange behavior for a few minutes – I’m not sure if it was being playful or distressed.

A couple of hours later the wind shifted from SW to NE (oh joy, wind and wave straight into the bay!) and the anchor alarm went off as we swung around, so we pulled up 45m of chain and reanchored with 60m out. That should hold!

It was a bouncy, rolly night so we were happy to set off at 6am up the east coast for Eddystone Pt. at the NE corner of Tasmania.

The winds were light ESE, which meant mostly motor sailing, although we did get the genoa poled out to sail “goose-winged”. 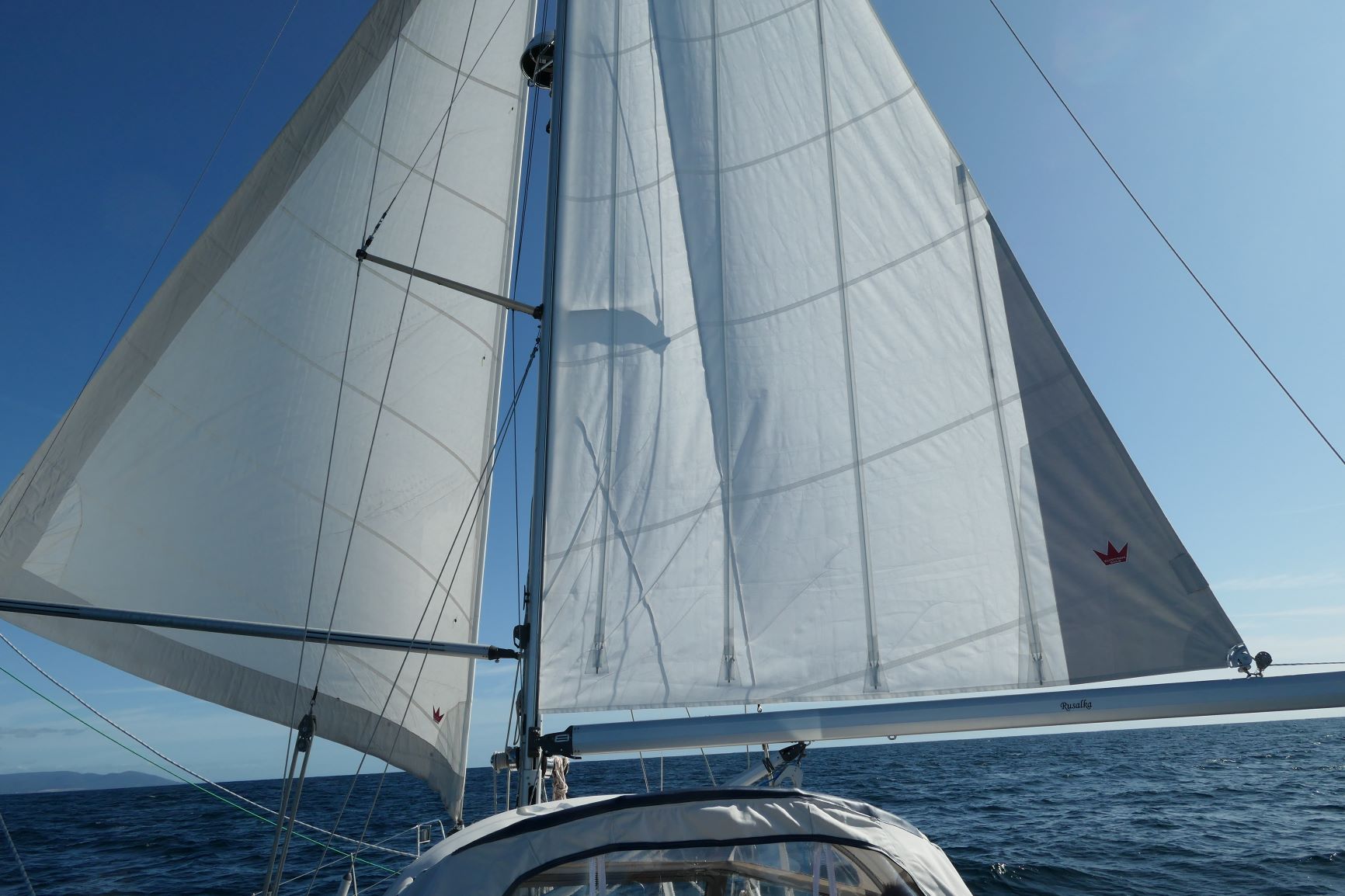 It worked for about 15 min before the wind died, so back to motor sailing.  Finally got to turn off the motor for the last hour as the wind strengthened.  When we arrived at Picnic Corner, on the N side of Eddystone, at 6pm there was already one boat anchored.  I thought I’d seen a sandy patch amongst the weed and proceeded to drop the anchor and 60m of chain, but as Alex put the engine in reverse to check if the anchor was set it was clear that it wasn’t as we kept going backwards!  Up came the 60m of chain and the anchor with an ENORMOUS ball of kelp and weed! 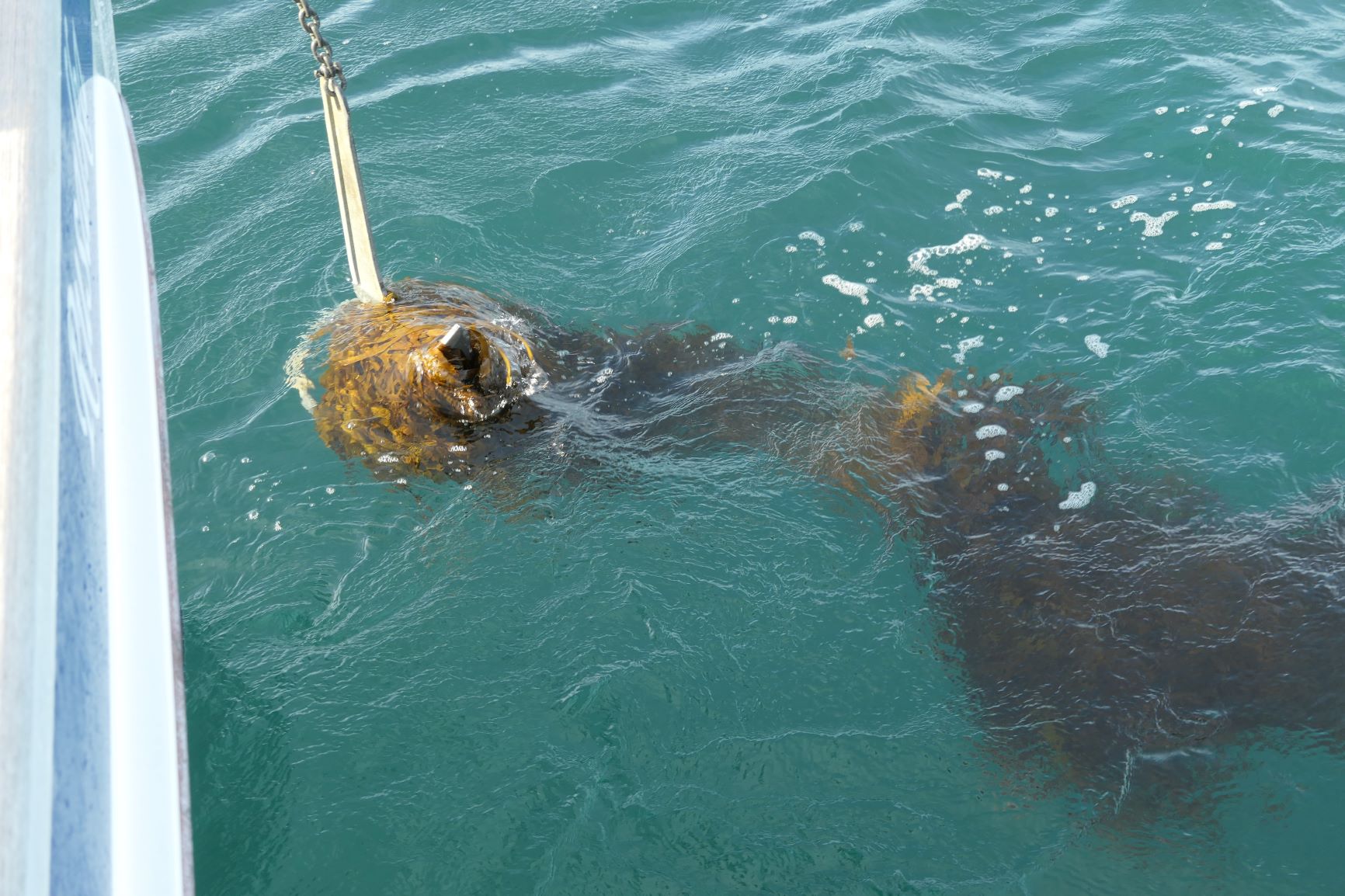 The next drop was a good one and we were secure, but not very comfortable as the swell rolled right into the bay.  Again it was a very rolly night! 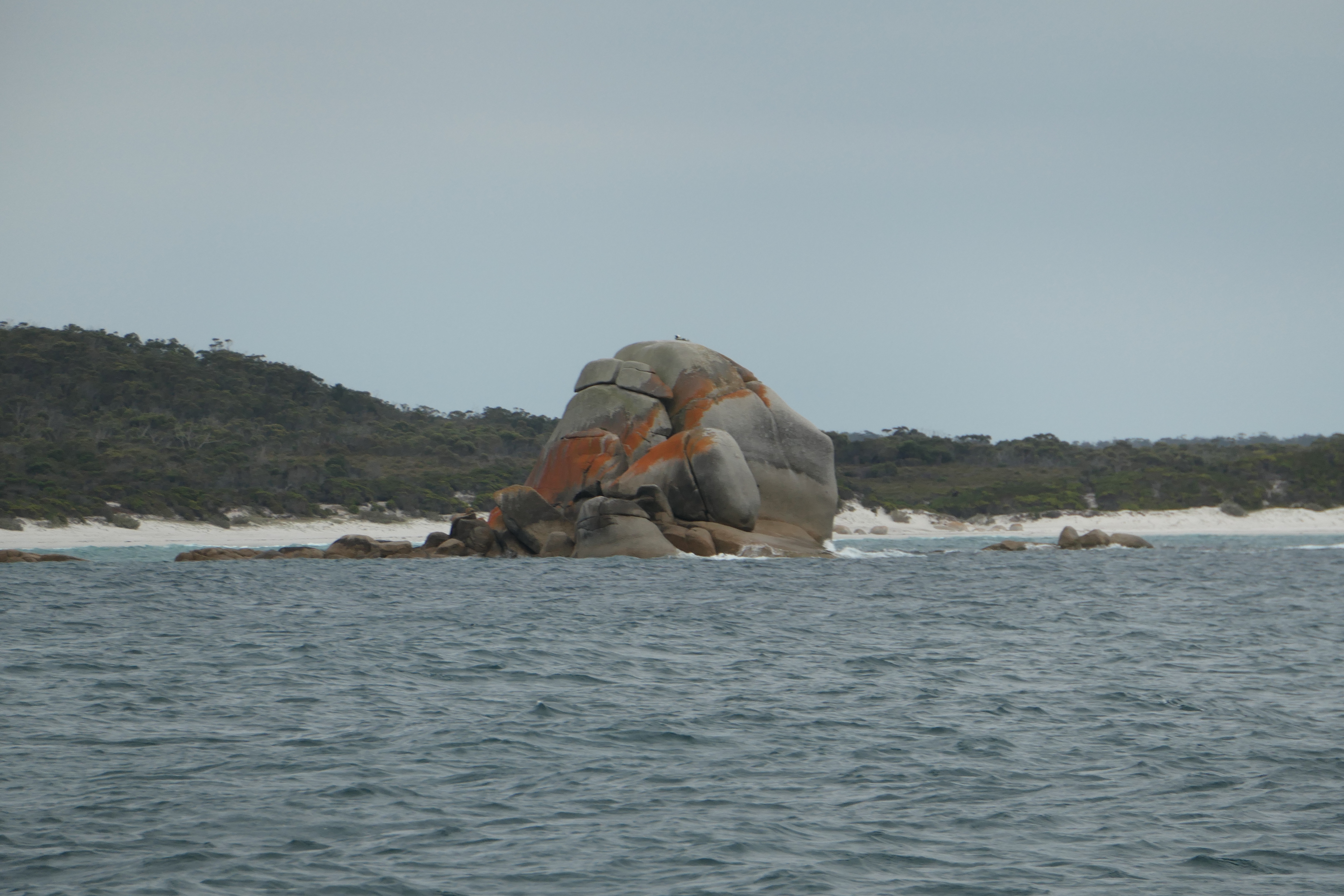 We were obliged to wait until lunchtime for a favourable tidal current to allow us to go through Banks Strait.  It was an uncomfortable morning – this video doesn’t do it justice, we were rolling +/- 15 degrees.

The reward for waiting was a 2kt lift from the tide flowing back into Bass Strait that shot us through Banks Strait and got us to our evening’s anchorage behind Croppies Point well before dark.  By comparison, Croppie’s Point was a delightfully easy place to park – great swathes of blissfully weed-free sand, no swell and only one other boat half a mile a way!

Today we woke up with the intention of heading into the Tamar River, but have decided to give it a miss and go straight to Devonport.  Friends were on hand at the Mersey Yacht Club to catch our lines and welcome us with a bottle of bubbly!  We’ll be here for a few days to re-provision, do laundry and wait for the next weather window. 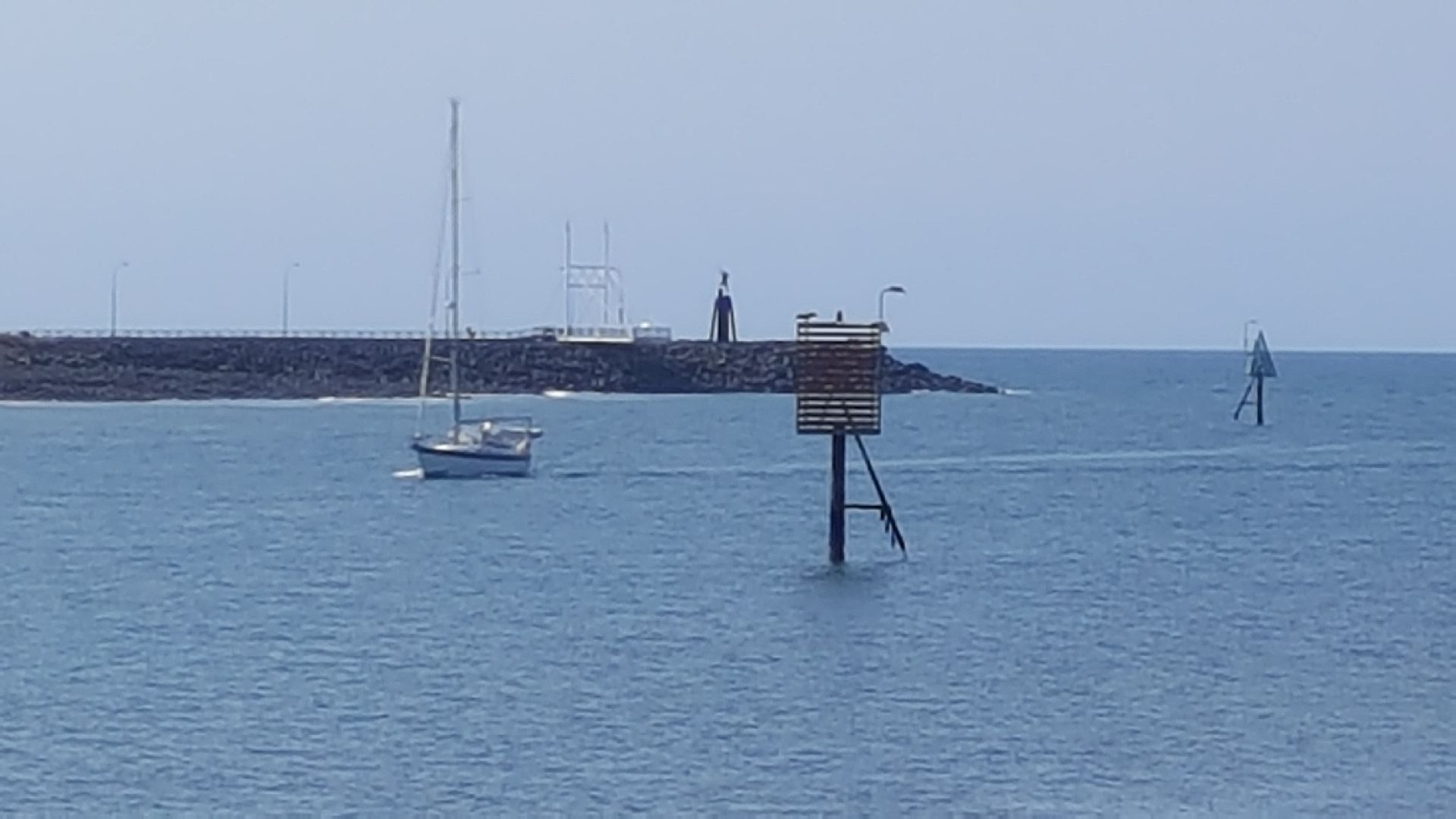 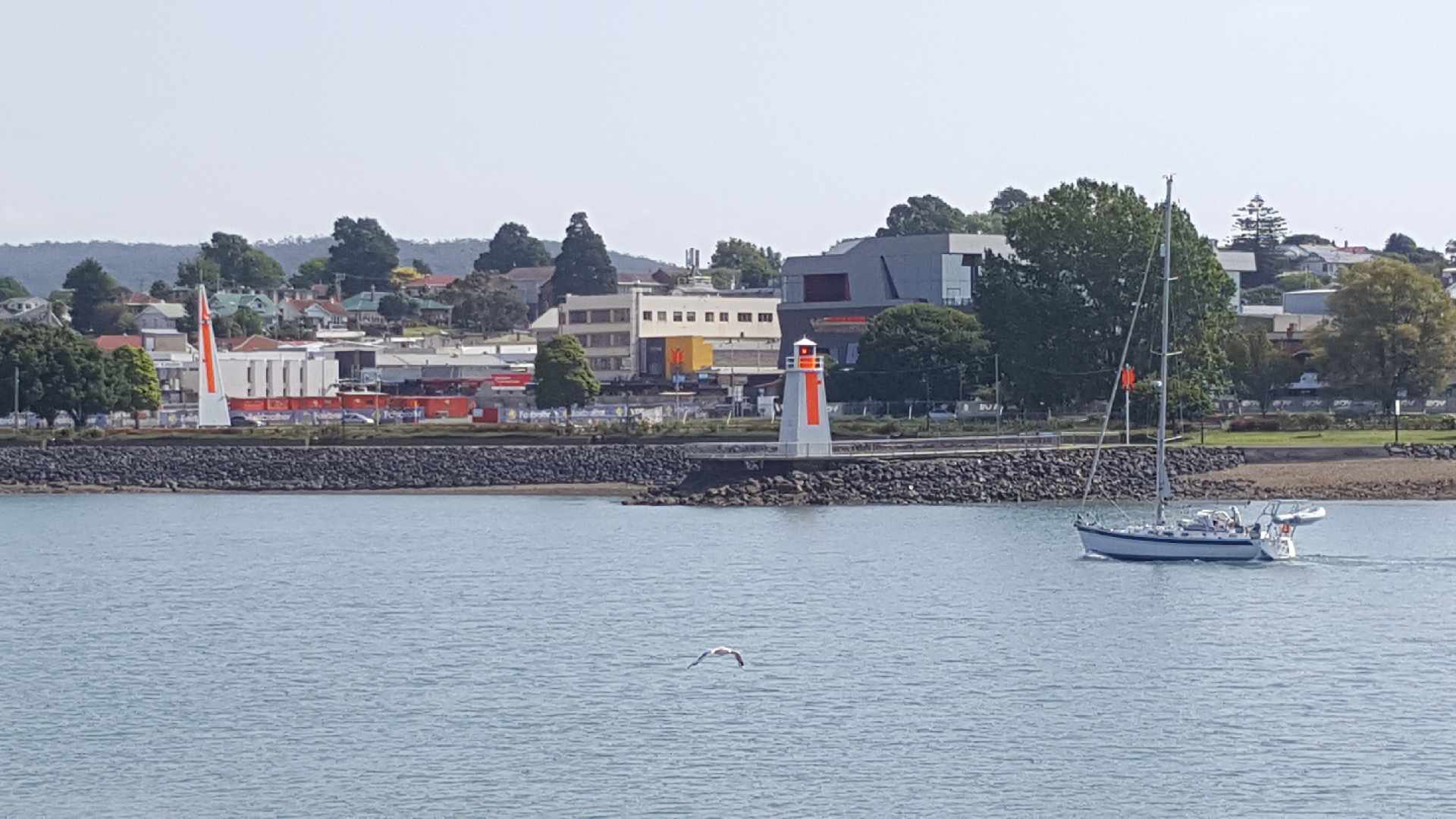 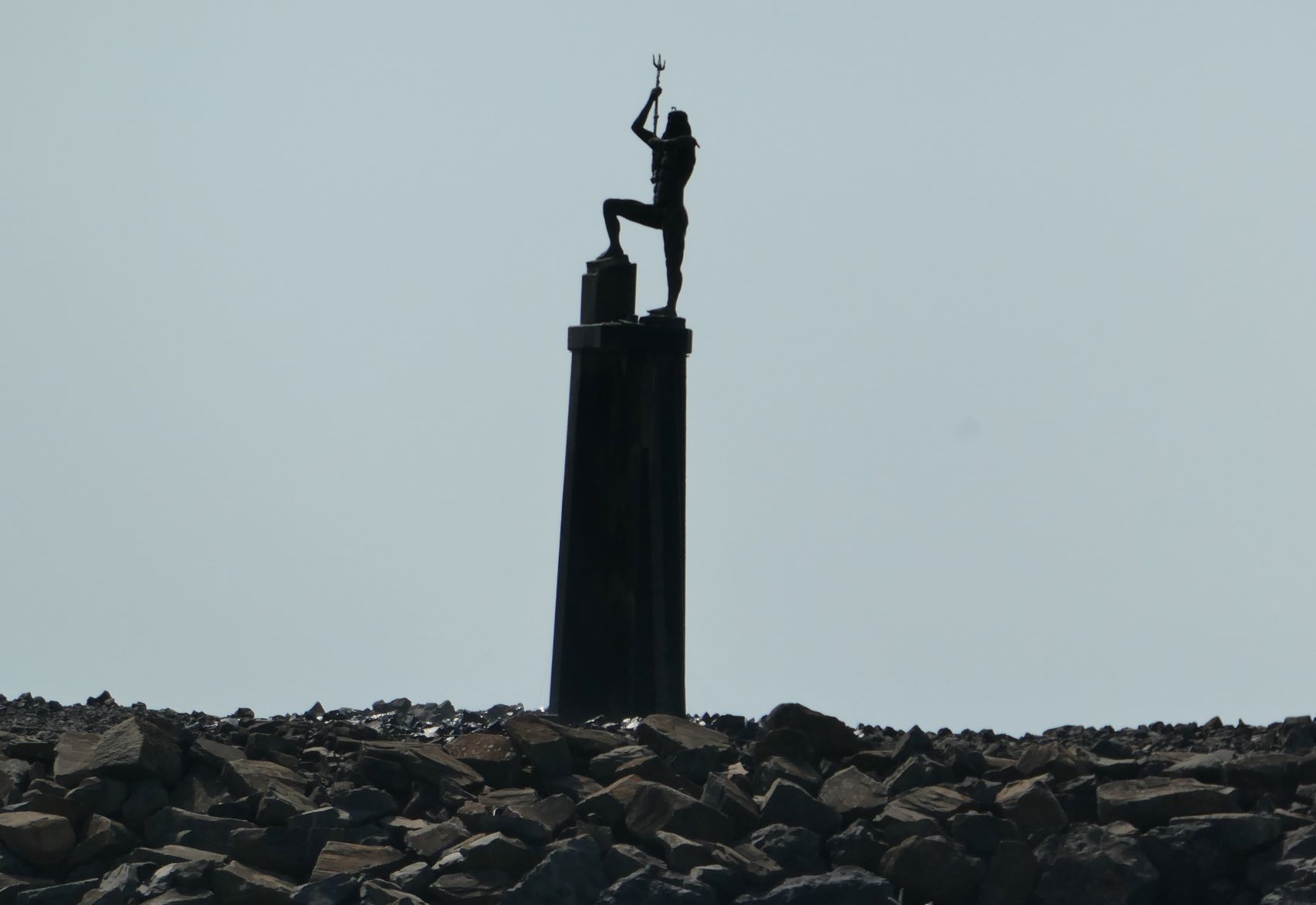 Thanks to Mark Stephenson for the photos of Rusalka entering Devonport!