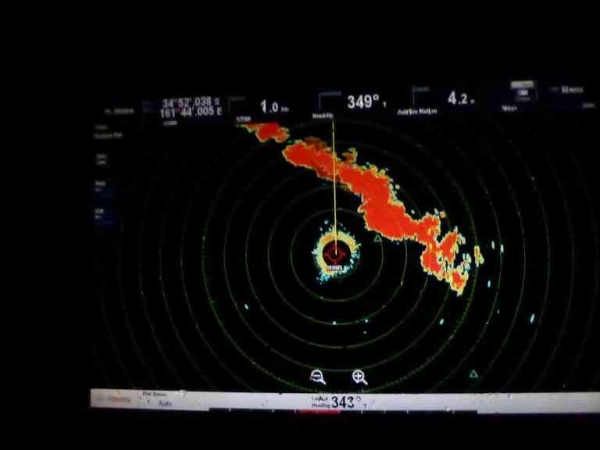 This is Alex's report on the events of the last two days:

How was it that we found ourselves in this storm?

Five days in advance we knew that a strong front and strong winds were due. All the models (GFS, ECMWF, Predictwind) showed we could lay a course and not get hit by it. Furthermore, Bob McDavitt (MetBob) also provided a voyage route that would allow us to bypass it.

After we set off, it began to look as if we would get more wind than originally thought. By 48 hours beforehand, with Bob's help and downloading the latest model outputs, we adjusted our course, and again 24 hours later. There was no avoiding it, but it looked as if we would get hit by the NW tip of the front, not the worst of it.

Monday morning we had to judge the situation as we saw it. We had the boat prepared, storm jib and heavily reefed main. Wind didn't start to build until early afternoon and it just gradually got stronger and stronger. We were beating SW into it to reach a particular waypoint (furthest south), hopefully just as the tip of the front would suddenly hit. Then, when the wind starts to change direction, we would turn direction and run N with it then NW away from the centre of it and the bulk of the front. These two courses, towards the WP and then a 90 degree turn was a track based on wind directions and the general direction to get out of the way, one could say bounce off the NW tip of the front.

Just before sunset there were clear skies to the north and to the S and SW very dark cloud.

After sunset there was no moon so it was particularly dark. Although the wind was a steady near 30 knots, the seas hadn't yet started to build. Lightning could be seen in the distance in a number of distinct centres and they were getting closer rapidly. Where the dark cloud and lightning was, was where our major turning waypoint was. I decided to skip that waypoint and head for the next one, by which time we should be on the run. This next WP was closer to us than the one in the front. The winds built up slowly but didn't back as predicted and the seas started throwing the boat around. Outside the security and relative peace of the cabins, the winds howled, rain came in short deluges and the lightning came and went. Over a longer period than expected the winds backed. As they backed the seas rose more and more and were at times confused. We were running N. 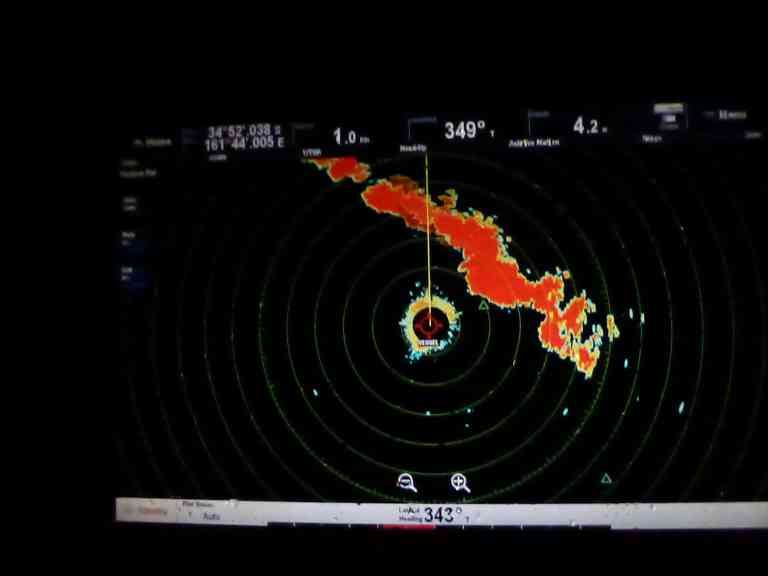 Tuesday 0520 I had been up for far too long and was extremely tired. Enough of running and we hove to. Instant relative calm. We all crashed into our bunks to get much needed sleep.

After several hours we rose to even bigger seas and tried to head as westerly as possible. The best we could do was 325T, not good enough to get to Eden. The seas were bigger than during the night. Later in the morning and into the afternoon we could hear and feel the shudder of the boat as breakers landed on us. All day it was howling wind and big seas. Rusalka kept us dry and safe.

Wednesday morning was more of the same. Big seas, strong winds, breakers. We still could not make a course further west than 325T. Our planned passage to Eden was not going to happen. Either we work out another route to Eden and get there days later than planned or work out something else. Consulting our gurus, Predictwind, Bob McDavitt and BOM synoptic forecast charts, we changed destination to Newcastle.