Since we had decided not to take Rusalka further afield than Marlborough Sounds, we hired a car to do a short road trip to explore the South Island further.

First stop was Cape Foulwind – I love the name!  We stayed at a B&B on the cliffs overlooking the wild west coast (although not so wild when we were there). 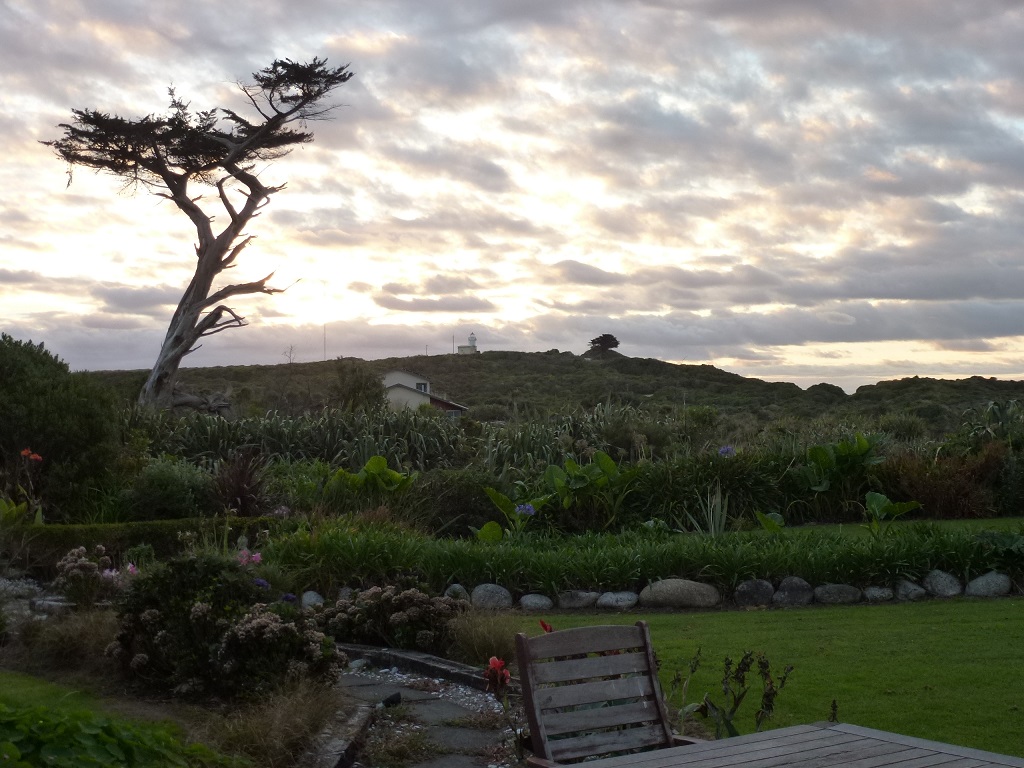 The beaches here are covered in smooth cobble stones coloured grey, white, yellow and green (some of these are greenstone – jade).  We tried to walk on the beach on a couple of occasions but were attacked by ferocious sand flies! 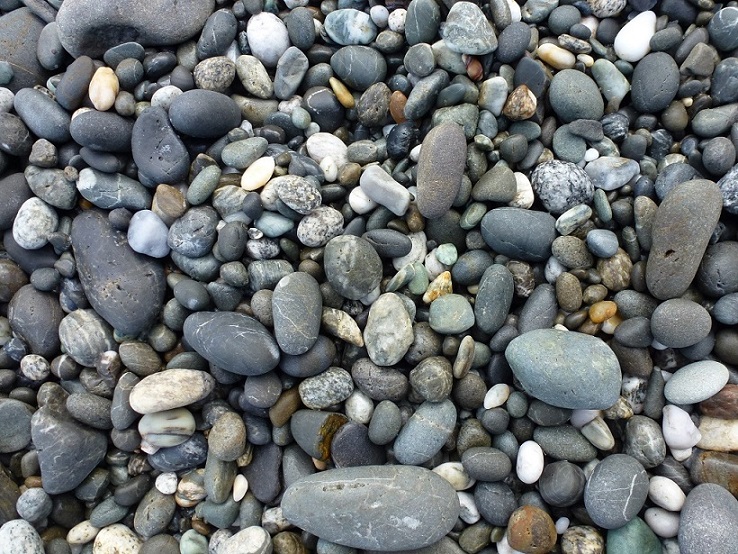 The next day we drove the scenic coastal route all the way to Franz Joseph Glacier.  Ok, it’s on everyone’s To Do list for NZ, but the crowds were really overwhelming!  The poor glacier has seen better days and it was a 90 min trek to the end of the moraine, which was still about 750m from the actual glacier.  It made us grateful for the fantastic walk on a glacier that we did in Iceland a few years ago. 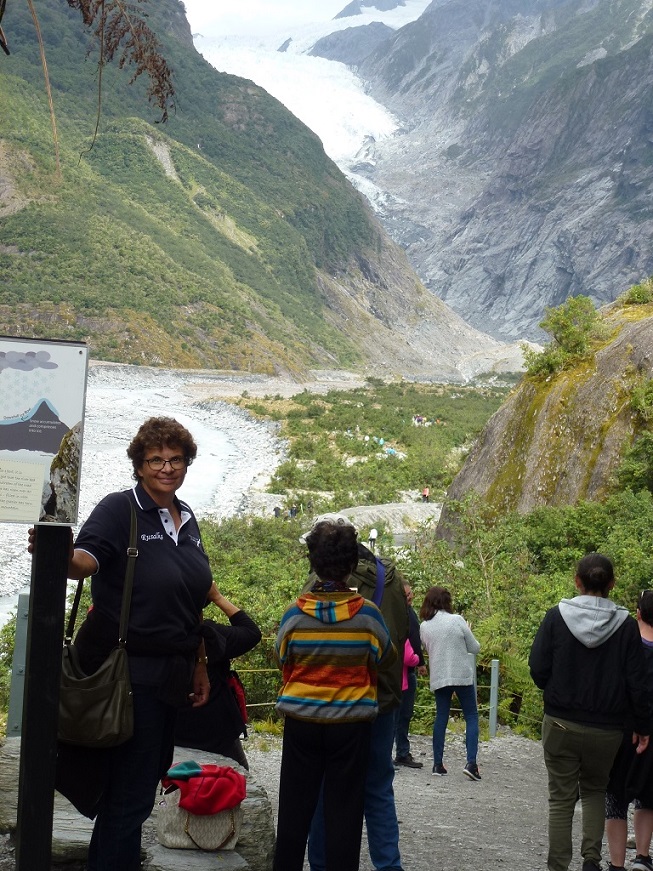 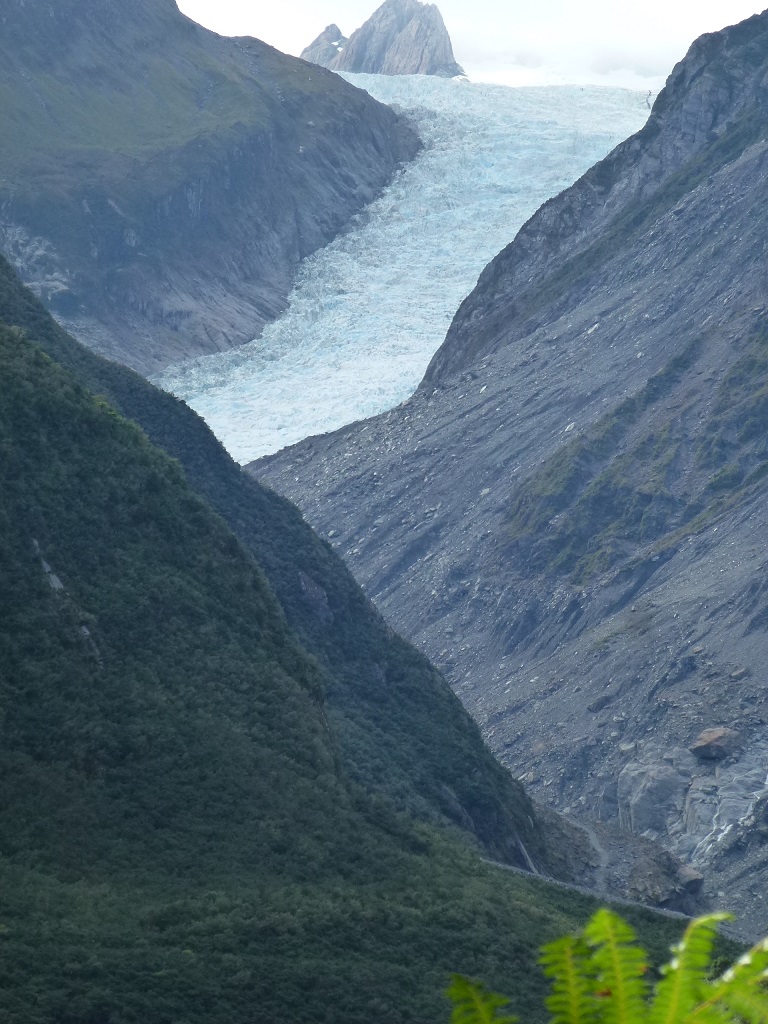 I suppose one interesting feature of NZ’s glaciers is that they come down to the level of the temperate rainforest, so it makes an interesting view of the glacier through fern leaves!

We backtracked to Hokitika – stopping at the beautiful aqua coloured Hokitika Gorge.  It really is this colour! 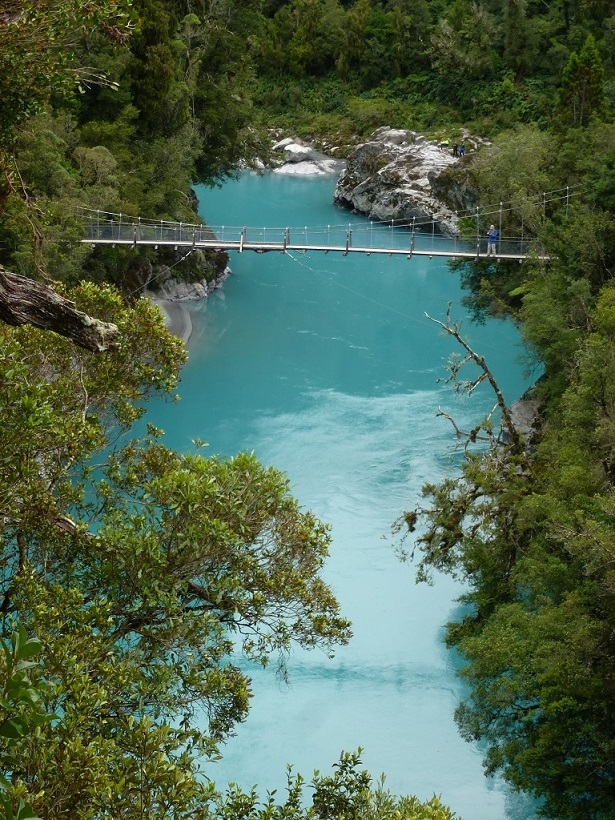 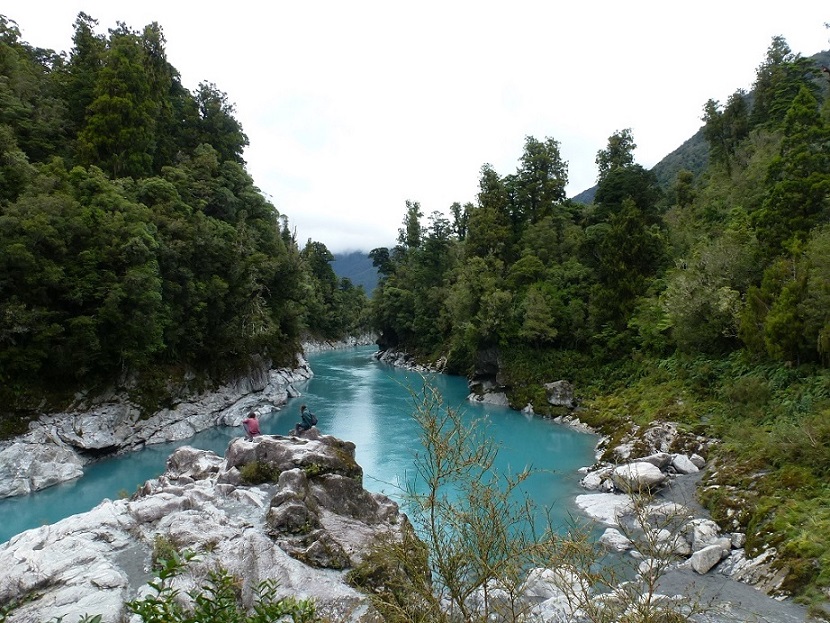 The weather, which had been forecast to be showery all week, finally caught up with us that evening.  The B&B we were staying at was on the beach, but it was too wet to explore (I did get to try panning for gold in the back yard – it’s a lot harder than it looks!). 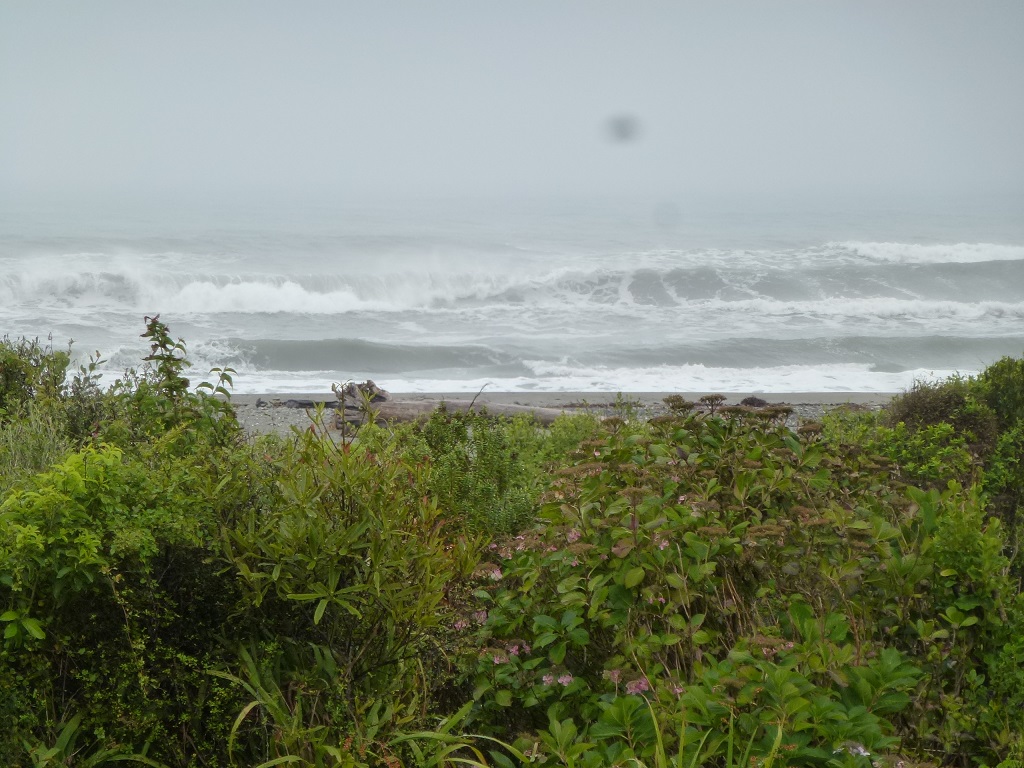 The next day we crossed over Arthur’s Pass to the east.  I would have like to stop and walk in the alpine setting (or at least seen one of the cheeky alpine parrots called Keas), but it was raining, so we pressed on.  The rain stopped when we descended to the eastern plains area and we had an interesting short walk at Castle Hill – apparently, they filmed some of the Lord of the Rings there.  It certainly looked like Middle Earth! 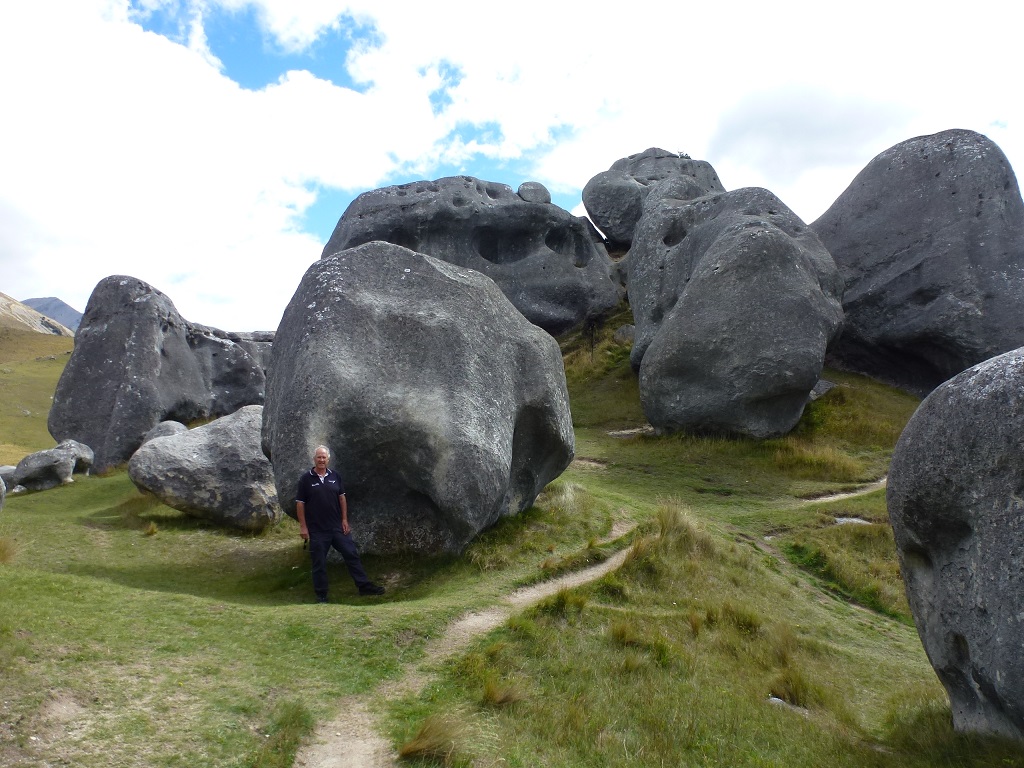 Our last couple of days were spent in Christchurch.  I vividly recall pictures my parents took on their visit there in 1997 – it was a pretty, tidy, small city that looked like an English university town.  It’s still pretty, but it was very sad to see the gaping holes in the centre of the city, which was largely destroyed by an earthquake in 2011.  There is a lot of rebuilding going on, but there are still many seemingly abandoned, half-destroyed houses and shops all around.  There’s some dissatisfaction amongst locals about the recovery process and I suspect that it will be a long time before there is healing from this major trauma.  One good bit of news is that it was recently decided to rebuild the iconic Christchurch Cathedral. 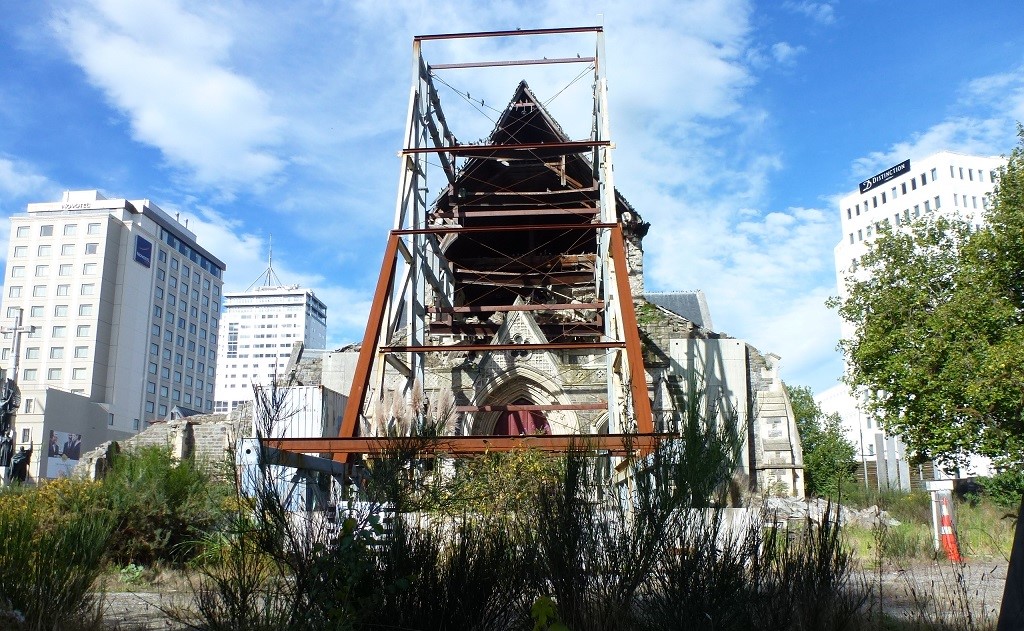 While in Christchurch we enjoyed seeing Teddy Tahu Rhodes and Simon O’Neill in a NZ Opera production of Tosca.  Very good performances!

Driving around the island was made more difficult by very frequent roadworks due to damage from landslips.  The recent storms certainly have taken their toll on infrastructure!  We’ve decided that there are more orange traffic cones in NZ than anywhere else in the world! 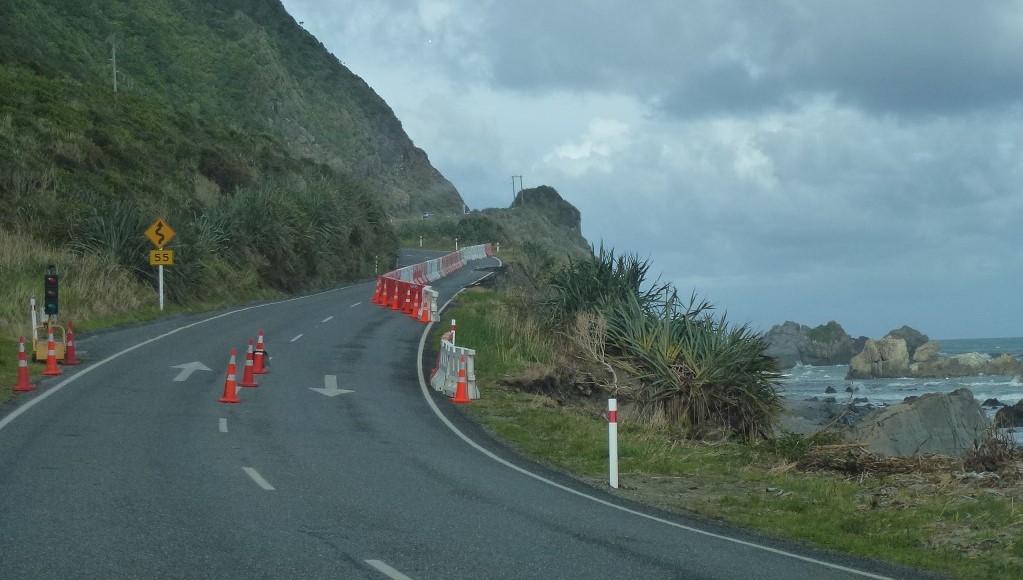