On to Pelorus Sound 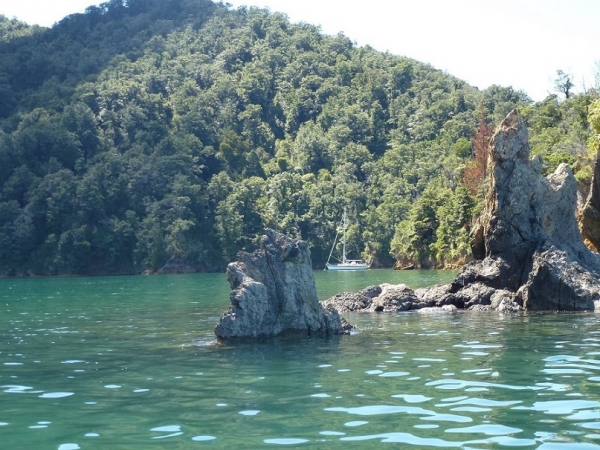 As always, the weather guides our plans. With a forecast of two calm days before a Northwesterly gale we decided to leave beautiful Queen Charlotte Sound and head back around Cape Jackson to visit Pelorus Sound.

After a few morning chores we dropped our lines and motored out of Picton.  We passed lots of little blue penguins – they seemed slightly larger than the Tasmanian penguins, but maybe it was my imagination.  Not a very good picture! 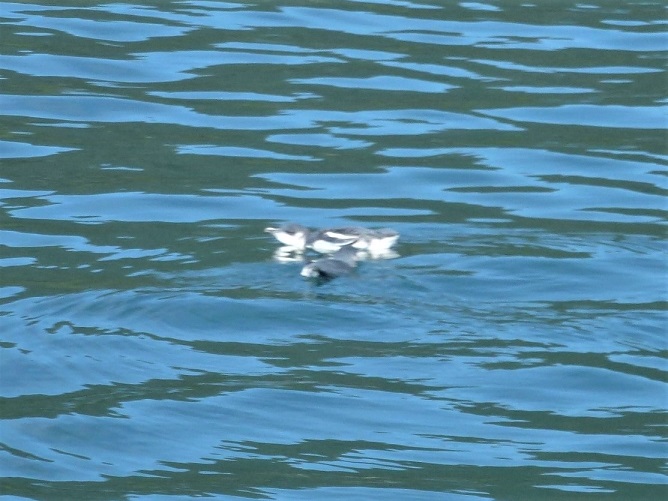 We were lucky enough to pick up an empty club mooring in a magical nook in Ship Cove. 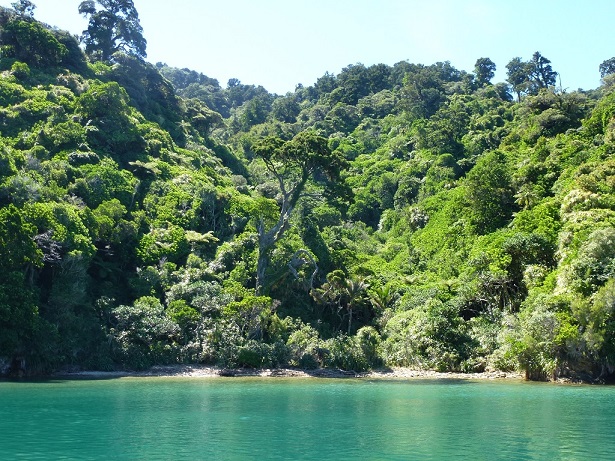 I should comment on the moorings here.  The bays are often quite deep right up to the shore, so it’s very handy to use a mooring.  There are 3 local boating clubs – Mana, Waikawa, and Pelorus – that jointly own about 100 moorings in the Sounds.  The moorings themselves are a fantastic design, comprising of a sphere with a plastic tube running through it. The plastic tube is not long enough to scratch the boat and the plastic buoys are soft enough not to bang or scratch.  The mooring line is threaded through the tube and a loop spliced on the end which prevents it being pulled out, but allows the rope to slide freely through the tube. 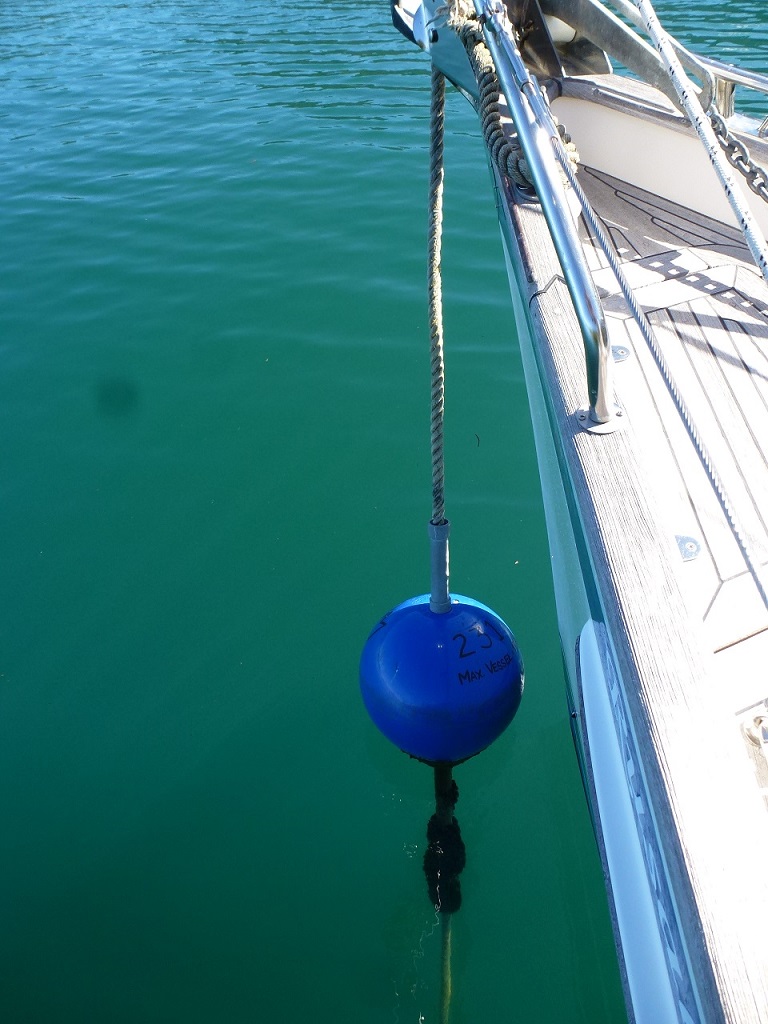 The loop (usually) stands clear of the water, keeping it clean and easy to pick up with a boathook and lift onto a cleat.  The only time we had trouble was when there was a build-up of mussels below the waterline that prevented the line sliding freely and we had to lift the weight of the rope, buoy and mussels all together!  This would be a great design to consider for Tasmanian conditions.

We set off at 7:30am on Saturday, aiming to round Cape Jackson at slack water.  It was very lumpy and unpleasant approaching the cape and we could see a crayboat dropping pots, so it was all eyes on the water as we dodged pot buoys and coped with a changing current. 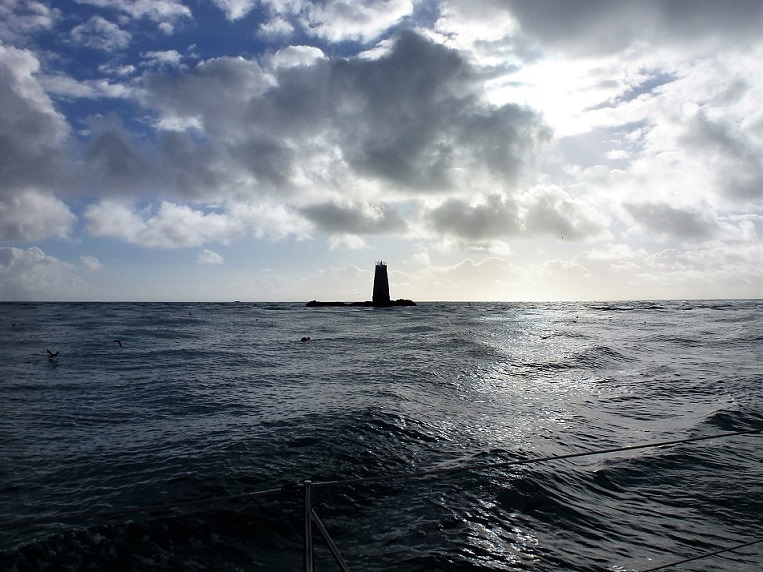 Soon we were around and put up the main to steady the side on swell.  Unfortunately, there wasn’t enough wind to sail until we got into Pelorus Sound, but we enjoyed a nice reach for an hour or so as we sailed further into the sound.

We checked out Hallam’s cove – a nice mixture of agricultural land, pine plantation, and fish/mussel farms, but there was no phone signal and we though it would be nice to have internet access if we were going to be moored in one location for a couple of days while the Northerlies blew. We motored a bit further on to a tiny cove opposite Elaine Bay with a club mooring (Muzz’s Cove).  It looked protected and cozy and had at least a little phone signal. 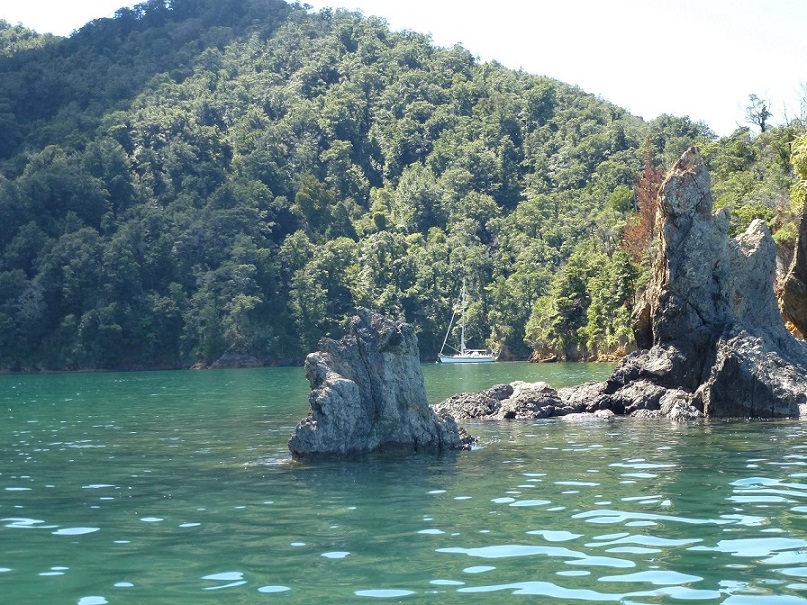 The club mooring is in the middle of the cove, but we noticed another small buoy in a little notch very close to shore – on closer inspection by dinghy we discovered it was holding a line that was tied to a tree on the shore and is intended to be used as a stern line for boats that want to anchor (in 10m of water!) close to shore. 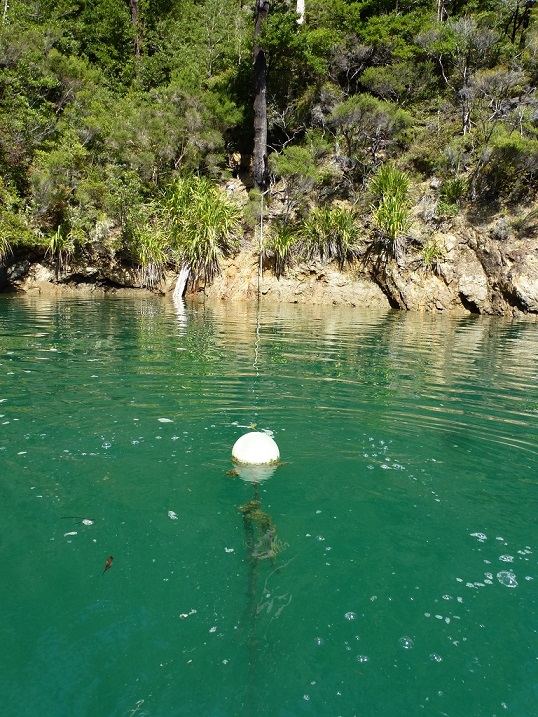 After a row around in the dinghy, followed by a refreshing skinny dip, we relaxed for the afternoon until sandflies and mosquitos drove us inside.  At least we were able to watch a little video on demand (we’re slowly catching up on episodes of “Shetland” that we’d missed)!

Today (Sunday) is a bit blowy.  We set off down Tennyson Inlet (very pretty bush setting) in search of another mooring with fewer bugs and better internet, but the only prospective mooring in Deep Bay was occupied and there was no phone signal! 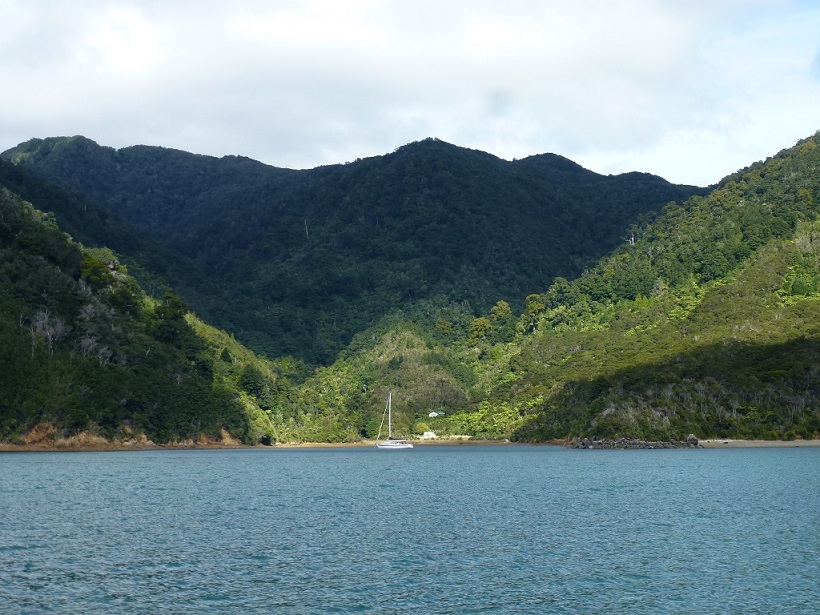 So back across a blustery Elaine Bay (up to 37kt gusts!) and onto the Muzz’s Cove mooring for another night.  We’ll make sure we put up the mozzie screens sooner today!